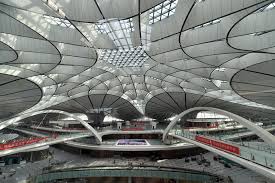 The new Bejing Daxing International Airport 50km South of the Chinese capital is ready to open this week. It will be the largest single airport terminal building in the world, capable of supporting at least 72 million passengers, utilizing 4 runways. The airport has been under construction since 2014 with 40,000 workers at the peak, costing an estimated $11.5 Billion. The anchor airlines will be China Southern and China Eastern, with approximately 80% of the slots. Pictures promise a gorgeous airport – find out more below!

The current Bejing Capital airport has reached its capacity at 100 million passengers with its three terminals and is notorious for flight delays. Bejing Daxing International Airport (PKX) is meant to alleviate that pressure. It has four runways in different directions at opening to optimize flight traffic and in the final phase is envisioned to have 7 runways.

The single terminal with its five terminal arms its meant to keep the distances short, promising a walk of no more than 600m from security to the furthest gate – that certainly will make it a more pleasant experience than other mega-airports with much longer walks or the need for a train.
The terminal has more than 8,000 rooftop windows and the initial photos promise a beautiful, light flooded space – certainly a very distinctive architecture and design!

Beijing Daxing Airport will be connected by a subway train to the Bejing transport network and eventually allow connections by high-speed train to the heart of Beijing in less than 20 minutes. It’s great to see the government incorporate public transport from the start to make this an integrated transport hub – and not a prestige symbol as in some countries…

It remains to be seen whether the airport will alleviate the congestion and delays in Beijing, as much of the delays are caused by the tight control of the Chinese airspace by the military and flight exclusion zones and less by the airport constraints at Bejing Capital. 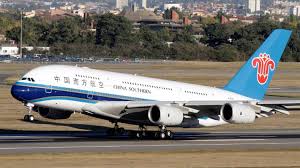 China Southern has scheduled an Airbus A380 for the maiden flight from the airport and will be one of the main tenants at the airport, together with China Eastern. Some international airlines also flying to Daxing will be British Airways, Finnish Air and Malaysia Air – all OneWorld carriers.

After living in South East Asia for more than 6 years now, I’m spoiled by beautiful, new airports and some of the best in the world, like Singapore’s Changi, Hong Kong or Seoul. I’m excited about the opening of yet another new airport.
Because Beijing is not a convenient airport for flights to Europe or the US for me and due to the main airlines serving it, I’m not likely to fly through it anytime soon, but look forward to doing so eventually.
If you fly through it, please comment with your impressions or email me your pictures –  I’d be happy to publish them!