Updated 2019: United Airlines is one of the top US airlines with several hubs across the USA and one of the largest commercial carriers in the world serving more than 300 destinations worldwide. As one of the founding StarAlliance airlines, they can take you all over the world with their partners and their rewards program MileagePlus has equally far reach. Find out all you need to know about their destinations, fleet, safety, on-time performance and award rankings in my United Airlines Facts & Figures! 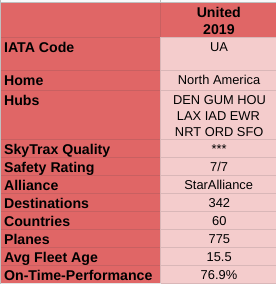 United Airlines – who are they? United Airlines (airline code UA) is one of the largest commercial airlines in the world, headquartered in Chicago, USA. United serves 342 destinations in 60 countries, from hubs in Chicago, Denver, Houston, Los Angeles, Newark, San Francisco, Washington DC, Guam and Tokyo, giving it exceptional reach.

SkyTrax rates United as a 3 (out of 5) star airline, on par with Delta and American but behind many large European, Asian or Middle Eastern carriers.
AirlineRatings gives it a perfect 7 (out of7) rating for safety.
OAG measures an On-Time Performance of only 76.9%, earning them a 3-star rating – that’s significantly behind their 4-star US competitor Delta at 83.4%!
Customer feedback is mixed – while United has many wonderful flight attendants, unfortunately there are enough bad apples that deliver an experience far from what you expect, especially in premium cabins.
United is a founding member of Star Alliance, the largest airline alliance in the world.

United Airlines Destinations: United serves 342 destinations in 60 countries, one of the broadest networks in the industry. They have one of the largest route networks between the US and Asia and also strong links to Europe.
United operates a classic hub & spoke network, with San Francisco and Los Angeles on the West Coast, Denver, Chicago and Houston in the center of the US and Newark and Washington on the East Coast. That gives you a pretty good shot at a one-stop trip from the US to major airports around the world.

As a StarAlliance member, they can connect you to more than 1,000 destinations world wide. The tight cooperation with partners like Lufthansa in Europe and ANA in Asia, they have excellent connectivity!

United Airlines Fleet: United is operating a fleet of 775 planes with an average fleet age of 15.5 years, making it one of the older fleets in the skies.
UA operates more than 500 single-aisle planes, with the Boeing B737NG the most common type. But you’ll also find B757 and Airbus A319/320 planes.
Short-haul planes are configured with a domestic First Class (recliner seats, comparable to international Premium Economy), EconomyPlus (standard 3-3 layout with additional legroom) and standard Economy class. Due to the age of the fleet, you’ll find different configurations and seats, so your in-flight experience will vary. 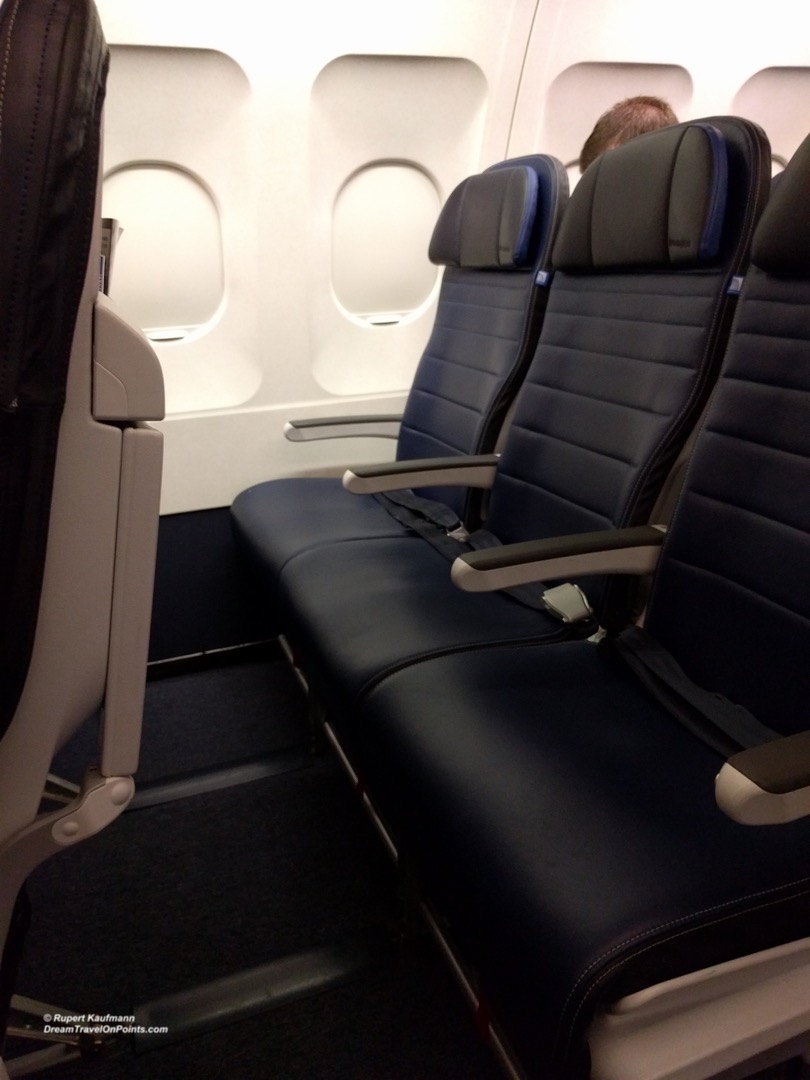 On long-haul routes, United Airlines operates exclusively Boeing planes including their most common, plane, the Boeing B777, the older B767 and the new B787 Dreamliner.
Within each model, United has multiple configurations, sometimes due to the age of the plane, sometimes configured specifically for a route, for example with more premium cabin seats. That makes it especially difficult to know what to expect on your flight.

The newest planes are configured with United Polaris, their newest lie-flat Business Class offering in a 1-2-1 layout with direct aisle access for each seat; followed by United PremiumPlus, the Premium Economy product with wider seats, more legroom and enhanced service, EconomyPlus with extra legroom and standard Economy.

Unfortunately, despite having been announced several years ago, you’ll still find plenty of old planes that are outfitted with United’s “sardine can” Business Class with a 2-4-2 layout and lie-flat seats. Some of the older planes still have Polaris First Class, United’s old first class product that’s being phased out.

That makes it very difficult to know what experience to expect from your United flight and it is essential to check the equipment on SeatGuru prior to booking a flight – your flight experience can vary drastically and plenty of frequent travelers will book their flights specifically to fly the new Polaris cabin!