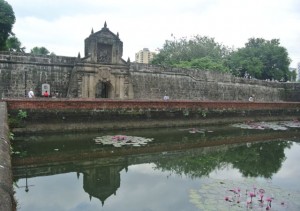 There is not a lot of colonial history to see in Asia, at least compared to South America. But Manila, with more than 300 years of Spanish history, has a few colonial gems within the city and one of the sites you should see is Fort Santiago, in Intramuros near Manila Bay.

The first defensive structure in the location of Fort Santiago was made of wood, built shortly after the arrival of the Spanish under de Legazpi in 1570. The stone fortress was competed by 1593 and was renovated over time. It has a roughly triangular shape, bound by the Pasig river and its moat, with walls almost 7m high and 2.5m thick. Over time, gun emplacements and batteries were added for the defenses of the city. Inside the walls are buildings for barracks of the troops, store houses and later prison cells. 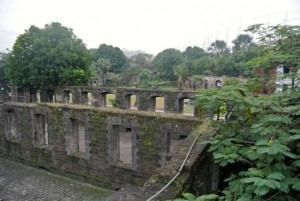 The Fort was used as a prison, holding among others the Filipino revolutionary Rizal, who was executed at the Fort in 1896 and is honored by a museum inside the Fort today. After the Americans took over the Philippines from the Spanish, the fort became the headquarters for the US forces. It was fought over by the Japanese and Americans during World War II and heavily damaged, as the rest of Manila.

Fort Santiago is best reached by private car or taxi – the next train station is at least 20 minutes walk away or you will need a Jeepney. There is a small entrance fee to the park area, well worth the visit. You enter the Fort through the main gate, probably the most photographed part of the Fort. You are able to walk around the grounds and climb up the walls of the fortress with views over the city and the river. The shrine for the national hero, Jose Rizal, provides some great insights into the Filipino rebellion against Spanish rule and the transition to US rule, and should be part of your tour! There are a few food, drink and souvenir shops outside the fort gate to refresh and you can hire a Calessa, a horse drawn carriage for a ride through Intramuros. The location makes it easy to combine a visit to Fort Santiago with a stroll through Intramuros and visits to the Manila Cathedral and church San Agustin. If you only have one day in Manila, these are the three sights you shouldn’t miss!