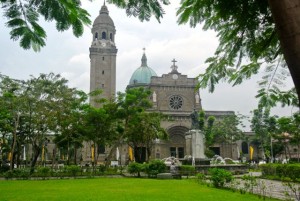 You might have seen images of the Manila Cathedral during Pope Francis’ visit – it is one of the most important landmarks and historic sights in Manila (read more here) and should by on your itinerary. A visit to this deeply Catholic country (the third largest catholic population in the world) would be incomplete, without seeing its large and impressive cathedral!

The first church was built in its place in 1571, shortly after the arrival of the Spanish under de Legazpi. Over its more than 500 year history, it was elevated to a cathedral in 1581 and over and over destroyed by earthquakes, fire and war – and each time it was rebuilt larger. The latest iteration, built in 1958 after destruction during World War II, is devoted to the Immaculate Coneption and was named a minor basilica by Pope John Paul II in 1981.It is a functional church with daily masses (five on Sunday!) and is open to visitors every day. You can find a great overview of its history, as well as the schedule here. 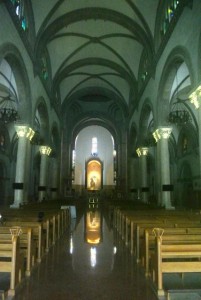 Approaching the cathedral from Plaza Roma provides a great first impression of the huge building and the bell tower on the side, with carvings on the front facade. Entering the cathedral through the imposing portal and looking down the central nave is probably the most impressive sight of your visit. I did not expect it to be so beautifully restored, from the marble floors and columns to the iron gates and vaulted ceilings! There are 134 stained glass windows, providing the cathedral with wonderful lighting and each with a meaningful story for the visitors! There are eight chapels in the left and right nave to explore, as well as the pulpit and altar! 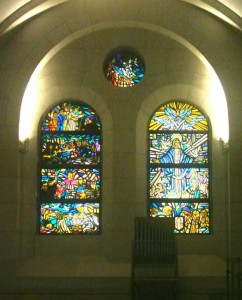 The Manila Cathedral is a short walk from Fort Santiago and church San Agustin or it can be reached by taxi from anywhere in Manila. It is open to visitors every day. As with every working religious building, please be respectful and try to visit outside of the mass schedule – unless you are planning to attend the mass. There is a small gift store next to the cathedral, near the bell tower and they have films describing the history of the cathedral. The short version is only 7 minutes and well worth seeing. It’s free, I made a small donation afterwards.

This is a very rare sight in Asia, easily combined with Fort Santiago and San Agustin, and should be part of even the shortest visit to Manila!