SkyTrax released their awards for the best Economy Class travel experience in 2017 and Thai Airways won the important award, followed by Qatar Airways, Asiana, Garurda and Singapore Airlines! Lufthansa was the top European airline at spot 10 and none of the US airlines made it even into the top 20! Thai Airways

SkyTrax has been operating since 1999 and conducts extensive surveys every year to come up with the results. This survey included responses from 19.87 million entries, covering 320 airlines and passengers from 105 countries. While no survey is perfect, this is the most extensive, independent airline survey conducted regularly, I find their ratings valuable and feature SkyTrax ratings in all my airline reviews!
While all the attention is usually on First Class and Business Class, with their flat-bed seats, restaurant style dining, suites and showers, the vast majority of passengers travels in economy class, making this the most important of the SkyTrax Awards! 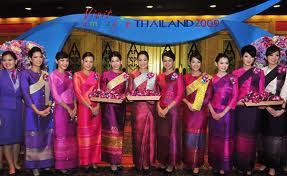 It’s very telling that the top 20 list only includes Asian, Middle Eastern and European airlines. It includes some of my favorites, like Thai Airways, Singapore Airlines and Lufthansa, as well as many 5-star airlines, like Qatar Air, Eva Air an Emirates.

Notably missing is Cathay Pacific, a 5-star airline – I recently flew them and their economy class product certainly does not deserve to be on this list. Saudi Arabian Air and Malaysia Air were surprises for me on this list – maybe I should give Saudia a try!

Special award are handed out for airline catering and economy class seats. Thai Airways wins the catering award for best airline food, followed by Turkish Airlines and Asiana, Japan Airlines offers the best economy class seat, followed by Asiana and Thai Airways.
You can find the full award listings here.
If you’d like to get more travel related news like this from around the world, please follow me on Twitter – I’m posting news daily, so you can stay up to date on the world of travel with my Twitter updates! Or, for a weekly update, sign up for my newsletter for a Sunday Summary!