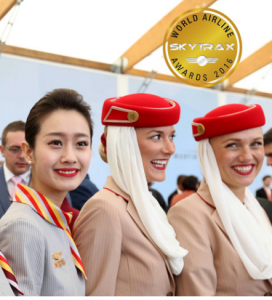 Every year Skytrax reviews the top airlines in the world and they just announced the 2016 winners at the Farnborough Airshow! Emirates has been awarded as the best airline in the world, nudging out last year’s winner, Qatar Airways, to second place and my favorite airline, Singapore Airlines, to the third spot. Read on to find out the other top 10 airlines and how the US carriers fared. 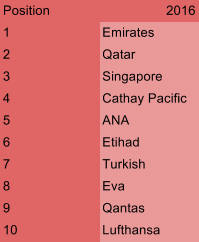 The other top ten airlines have all been regulars on this list, demonstrating their commitment to product quality and service. With Cathay Pacific, All Nippon Air and Eva you find three more Asian carriers in this exclusive club – all of them have, not surprisingly, been on this list frequently over the years. Etihad, there third Middle-Eastern carrier has also been a regular, unchanged on place 6 this year. Qantas, Turkish Air and Lufthansa fill out the remaining spots. It’s interesting to note that StarAlliance is dominating the charts with 5 carriers in the Top 10, followed by OneWorld with 3 carriers. SkyTeam is missing from the list, confirming the trend over the years that StarAlliance has the most premium airlines and SkyTeam the least!

If you are looking for US carriers on the list, you have to scroll much further down: Virgin America is (again) the highest ranked at spot 25, Delta is the top major carrier at 35, followed by United at 68 and American at 77. That confirms what most US frequent travelers know – the major US carriers are far behind their Asian and European competitors, which is why I avoid the US carriers for international travel whenever I can! 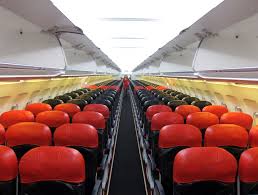 Air Asia wins the top spot again for low cost carriers at position 23 overall (notably ahead of all US airlines!). Norwegian Air that has been increasing competition across the North Atlantic, comes in as the second low-cost carrier at position 30! Another European carrier, easy jet, is the third budget carrier in spot 38.

Among the winners and losers a few stand out for me on the list: Thai Airways, one of my favorite airlines, gained 6 positions and lands on 13. Malaysia Airlines, one of my most airline miserable experiences in a long time, dropped 10 positions to No 34 – still better than I think they deserve. And one of my “home town” carriers, Philippine Airlines, creeped up 4 spots to No 83 – they still have a long way to go!

If you want to find out more about those airlines, click on the links to the overview of the airlines and what experience you can expect. If you want to see the whole list to find the carriers you care about most, go here!