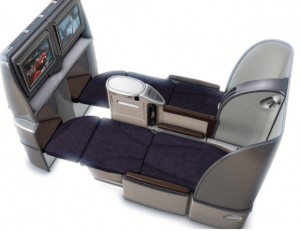 I have spent more time in United Business Class than in any other premium airline cabin, literally hundreds of thousands of miles on frequent business trips around the globe while living in San Francisco, one of United hubs. It’s neither the best seat nor service, but United is making improvements to both with the roll-out of Polaris. Find out how it compares to other business class products on offer!

Pre-departure: Prior to your flight, a United Business ticket will allow you to check in two bags up to 70lbs (32kg) for free. United/Star Alliance Status of Gold or higher adds a third bag for free. You can also bring one carry-on and one personal item of standard dimensions and without a  defined weight limit! That’s very generous, and makes travel pretty easy.

United’s web site and mobile app are not perfect, but some of the best on the market, making it easy to check in online and print your boarding pass at home.
At the airport, United typically has a separate line for Business, often combined with a line for elite members of MileagePlus (1K/Platinum). Your mileage may vary at smaller or foreign airports with limited check in space or services provided by non-UA staff.
A business class ticket also entitles you to lounge access for international flights, but don’t get too excited – most of the United Lounges are providing only the most basic seating, food and drink. Only one of the much improved Polaris lounges has opened to date, with much delay for others.
United has one of the most detailed boarding processes of all airlines, with more groups than most people understand. As a Business Class passenger, you are able to board after Global Service and First Class.

Service Onboard: United’s inflight service is competitive with American Airlines and Delta, but far behind premium carriers like Singapore Airlines, ANA or Lufthansa. While I have had some very good crews who were friendly and attentive, far more often you are likely to have a crew that is somewhere between disinterested to grumpy or outright rude. Don’t expect assistance with your luggage, personal introductions or any special effort to make your flight more pleasant. My list of stories in the category of “you wouldn’t believe” is too long for this post…

The inflight entertainment is a more positive experience. You get a long list of movies and TV-Shows, enough even for the longest flight, but not offering as much choice of premium movies like Eithad or Singapore Airlines. In most cases, your screen is mounted in front of you and available before departure. I always enjoy that as I’m able to finish one feature length-movie along the meal service, giving me maximum sleep time. The IFE system is easy enough to operate.

The food usually consists of appetizer (salad plus cold appetizer), a main course (typically beef, chicken/fish and a vegetarian entree), followed by cheese/fruit and ice cream. You can pre-order to meet specific dietary needs, but can’t order from a long list of meals like on Singapore Airlines. Similar to the entertainment, the choices are mainly geared toward Western tastes, with an occasional main course choice matching the flight destination (Japanese, Chinese,…). I found the food to be predictable, consistent and about as tasty as airline food gets. I’ll take a nice steak over a well-intended, star-chef designed meal that was heated onboard into an unrecognizable blob… United does seem to plan meals pretty tight, so even after paying a business class fare, you might not get the meal of your choice – something not really acceptable in a premium class. By my observation, they seem to go by passenger status, so as a Global Service/1K member for years, I always got my first choice, but without status, you might not be so lucky…

United launched their new Polaris Business Class product with great fanfare in 2016, but with little immediate impact on your flight experience. You do get improved bedding developed in partnership with Saks Fifth Avenue, consisting of plush pillows, duvets and mattress pad. You also get a revised amenity kit! 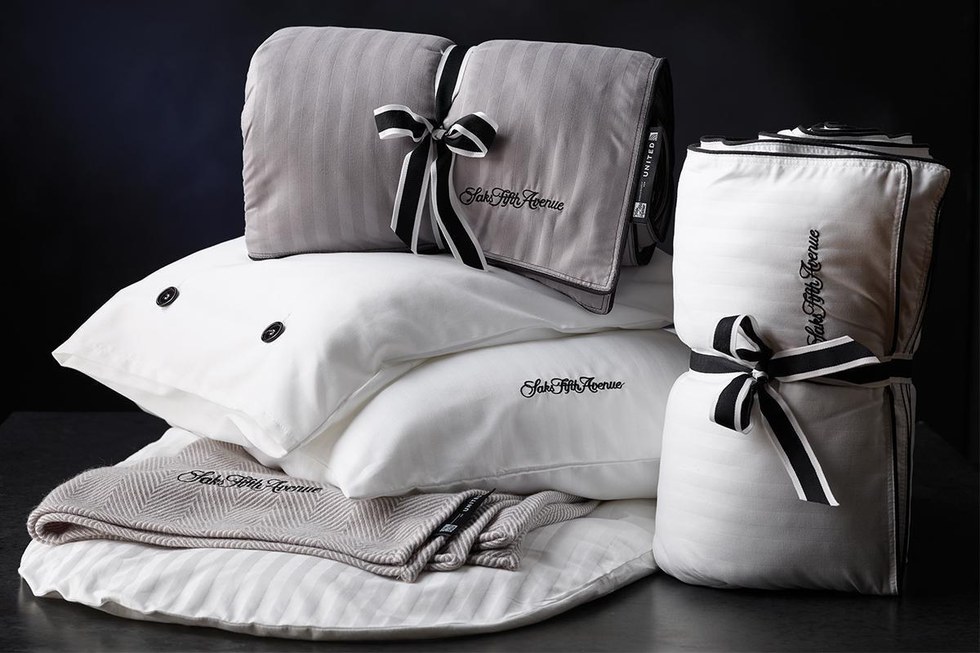 Hardproduct: Unfortunately, soft bedding can’t make up for a bad seat and unfortunately, only a handful of planes feature the new Polaris seats in a 2-1-2 layout with direct aisle access for every passenger. These are very competitive seats and currently only available on some B777-300ER .

The majority of international business class cabins consist of pre-merger United seats in a 2-4-2 layout (aka Sardine Class). The seat reclines gradually to a fully flat position and is narrow at 20in but comfortable to sleep in. I always got good rest in it, but your experience might differ if you are stuck in a middle seat and have to climb over other passengers – or have people climb over you. These seats are deployed on most B777 and some B767. Some of the seats are rear-facing, which I found awkward, especially during take-off, and tried to avoid when possible. 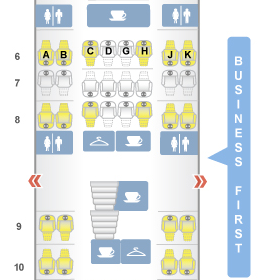 You’ll find pre-merger Continental and post-merger planes with a 2-2-2 layout, giving more passengers direct aisle access. The seats are similar in comfort, but slightly longer at 78in and wider at 22in. You’ll find this layout in B787 and some B777-200 and B767 (2-1-2 layout).
In still operating B757 you’ll find a similar seat in a 2-2 layout.

If you have been wowed by the United Polaris advertisements, I urge caution – few planes have the new seats and on most flights, you’ll find yourself in a seat that is no longer competitive. I am avoiding United Business Class, until they have converted the fleet to the new Polaris seat.

Bottomline: United Business Class offers a flat-bed, good amenities, entertainment and food, with below par service. Even though I have flown United Business Class more often than any other premium cabin, I now avoid it whenever possible. Premium airlines like Singapore Airlines or ANA to Asia and Lufthansa or Swiss to Europe offer a much better experience at similar prices – or you can fly with a (still better) product for a lot less on other airlines. I recommend to look for alternatives on the routes you fly and give it a try – you might never go back to United Business Class after trying something else… If you do fly United, choose your flights and planes carefully – your experience varies greatly based on the plane you’ll fly!