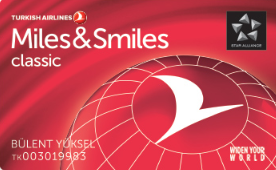 The rewards program of Turkish Airlines is called “Miles & Smiles”. It has received more attention (especially in the US) with their participation in StarAlliance, the move to revenue-oriented miles earning by other StarAlliance airlines and their recent addition to the Citi ThankYou program, allowing credit card holders of the bank to transfer points into Miles & Smiles for award flights. Let’s find out how many smiles exactly you are going to get out of those Turkish Airlines miles! 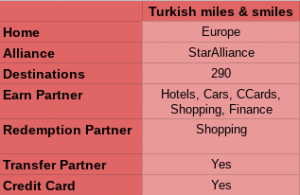 Reach – Turkish Airlines is proudly flying to more countries than any other airline on Earth, reaching 290 destinations in 119 countries. They cover much of the world with a single stop-over in their centrally located hub of Istanbul. And their participation in StarAlliance adds hundreds of destinations more, making the reach among the best of the airline award programs. Get more details in Turkish Airlines – Facts & Figures!

Earn – how do I earn miles? That’s a great question and Turkish Airlines is pretty shy answering – offering a calculation tool with the explanation that they’ll award whatever points you deserve at the time and retaining the right to change their mind. This kind of opaque approach doesn’t inspire a lot of trust in the program.
I researched different fare classes and found the following: Domestic flights earn a fixed amount of miles, depending on the fare class, anywhere between 0 for discounted economy fares and 1,250 miles for full-fare business class.
International Flights earn miles based on distance and fare class. The lowest economy fares won’t earn any miles, higher fares earn 25% of the distance flown and up to 125% for full-fare economy. Discounted business class earns 135% and full-fare business class gets 150%.
While I’m glad that Turkish Airlines has stuck with distance-based earning, the earn rates are not very generous. If you are mostly flying discounted economy flights, you might never earn a single mile in the program!

You can earn miles in the program with hotel stays (mostly fixed amounts), car rentals, shopping or financial partners and, for residents of Turkey, with credit cards. Card holders of Citibank ThankYou credit cards can transfer miles at a 1:1 ratio, allowing them to top of their account!

Miles are only valid for a period of three years and you can’t extend them through more activity, but have to pay a fee of 1ct/mile – two thirds of their value! Hard expiration of miles is the worst way to handle them and the extortionate fees don’t make it any better. This makes it really hard for infrequent fliers to earn meaningful rewards!

Redeem – what do I get for my miles? You can redeem your hard-earned miles for free flights on Turkish Airlines or their partners. And Turkish Airlines does have a published award table of how many miles it’ll cost you: 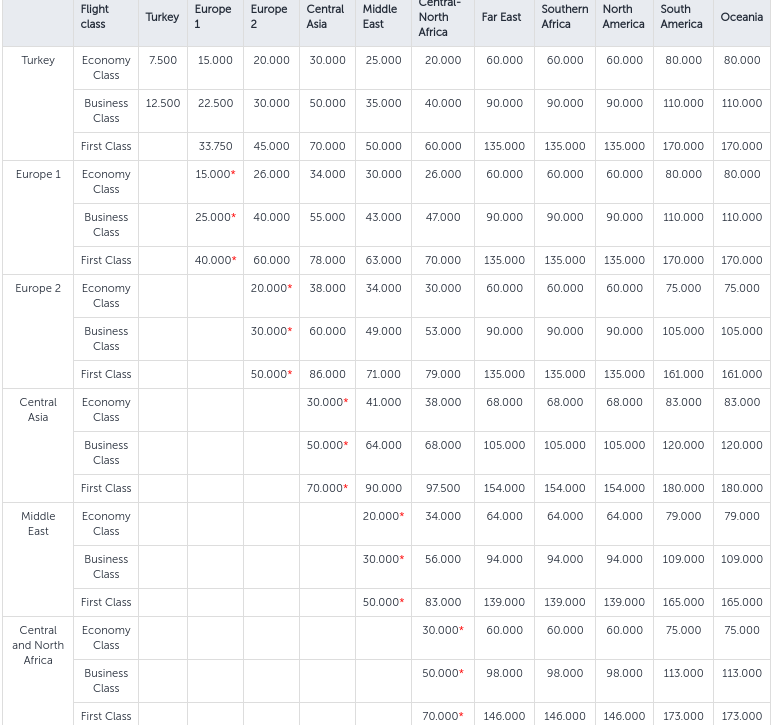 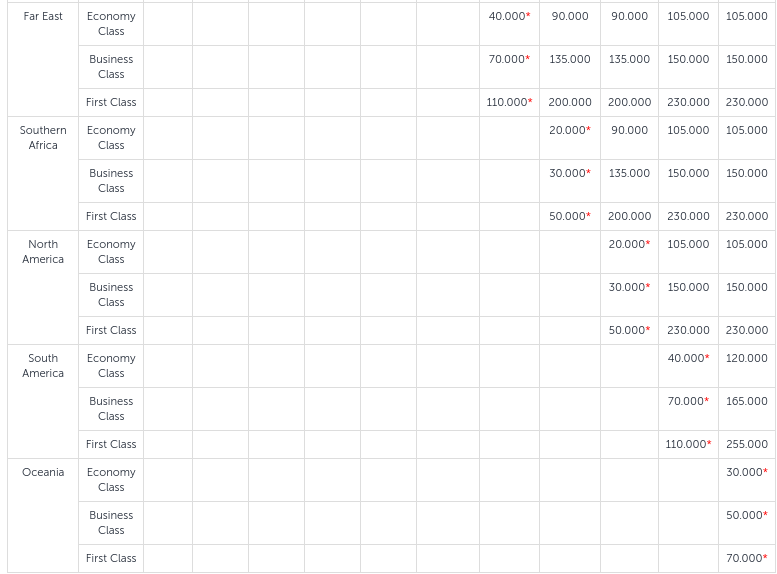 These are the prices for round-trip saver awards on both Turkish Airlines and StarAlliance partners. One-way tickets are half-price. These award ticket mileage amounts are actually quite attractive – for example business class between Europe and the Far East is 90,000 miles round-trip – roughly half of what United or Singapore Airlines charge. And North America to South East Asia are 105,000 miles in business class – also significantly less than what other reward programs charge.

But when things are too good to be true, they often are: Reportedly, Turkish Airlines charges some very steep surcharges on award tickets, making it much more pricey than it appears. Unfortunately, Turkish Airlines also doesn’t disclose those fees upfront – you will only be able to see them when you have enough miles to book a ticket! This is a very unfriendly customer move, as it makes it impossible to plan ahead and decide whether it makes sense to save for an award or not. I have purchased a number of Turkish Airlines long-haul business class tickets at prices of under $2,000. 90,000 miles is good value for that redemption – but not if you pay hundreds of dollars of fees!

What makes it worse is that you have to get your award ticket from a ticket office – that’s certainly not an acceptable approach in 2018!

The benefits include priority check-in and immigration lines, additional baggage and lounge access. You’ll also be able to purchase companion tickets at discounts when traveling in business Class. A unique feature is the ability to gift miles as a top-tier elite to other members. The fact that you are only getting a single upgrade as a top-tier member is disappointing. You can see an overview of the benefits by level below: 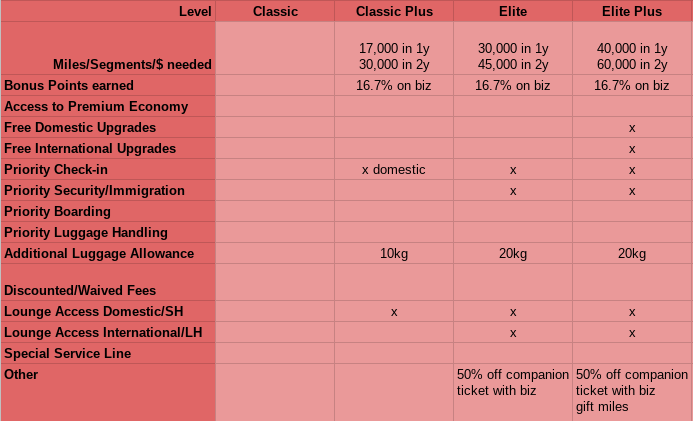 Online & Customer Service: I have started to review the online presence as part of the end-to-end experience with the airline – and it isn’t pretty in Turkish Airlines’ case – the website seems to be focused on a local audience and while available in English, is just not functional. I was not even able to join the program – the web site would only allow a set list of cities for Germany or the US, so if you don’t live in a city Turkish Airlines believes to exist in the country, you are out of luck. But even if they know your city, you might not be able to join – the website wouldn’t allow me to pick a password. If even the most basic feature, required by every member, doesn’t work, it doesn’t bode well for more complex transactions. And reports of the Turkish Airlines call center support are not positive either.

Who should join Turkish Airlines Miles and Smiles? My enthusiasm for Turkish Arlines’ rewards program Miles & Smiles vanished pretty quickly: Opaque mileage earning, high & hidden award ticket fees, the requirement for in-person award ticketing and a poor website that won’t even let you sign up are all significant negatives in reviewing the program. If you live in Turkey or fly Turkish Airlines very frequently, you’ll have to grind your teeth and work through it. For everybody else, it’s probably not worth the effort to join. There are other StarAlliance programs that offer more generous miles earning, lower award prices, easier redemptions or a combination thereof, putting Turkish Airlines Miles & Smiles near the bottom of the StarAlliance carrier programs I’d recommend to consider!