The US Department of State just ordered the departure of family members of employees at the consulate in Istanbul and updated their general travel warning to reflect that. While I consider the US and UK travel warnings as very conservative in general, this is a significant new piece of information to consider if you have travel plans to Turkey. Ready why I won’t go now and how you can stay safe!

The US has had a general travel warning in place for the South East of Turkey, bordering Syria, for a while and advised caution due to the repeated terror attacks in the country. This order for family members to depart Istanbul is different in that it is based on new threat information:
“The Department of State made this decision based on security information indicating extremist groups are continuing aggressive efforts to attack U.S. citizens in areas of Istanbul where they reside or frequent.”
And if foreigners are targeted in areas they frequent, like malls, entertainment areas or at tourist attractions, than anybody who fits that target group and is planning to frequent those places is at a much increased risk, family of US consulate employees or not, and I’d recommend that you stay out of Istanbul as well for the time being! Read the US Department of State Travel Warning for more details!

How can you stay safe when traveling abroad? I look at the risk overall for the countries I want to travel to and plan my travels accordingly.

1. Avoid war and conflict zones
Ok, at the risk of being obvious, I personally avoid any regions that see open warfare, civil war or conflict. If people believe that killing each other is their best choice, it’s probably not a good time to visit as a tourist! I’m sure Afghanistan or Iraq are beautiful countries with wonderful people – but this is not the best time to visit and I’ll keep them at the bottom of my list of places to see until things calm down. And no, anecdotal evidence of travelers along the lines of “I went for x days and it was fine!” could mean that things are indeed fine – or that they just got lucky. I’d include “cold war” countries in this group, I’d consider it reckless for US citizens to visit North Korea for example! The IDMC maps out the number of people displaced by conflict and violence, giving you a general idea of hot spots to avoid (click map for more details): 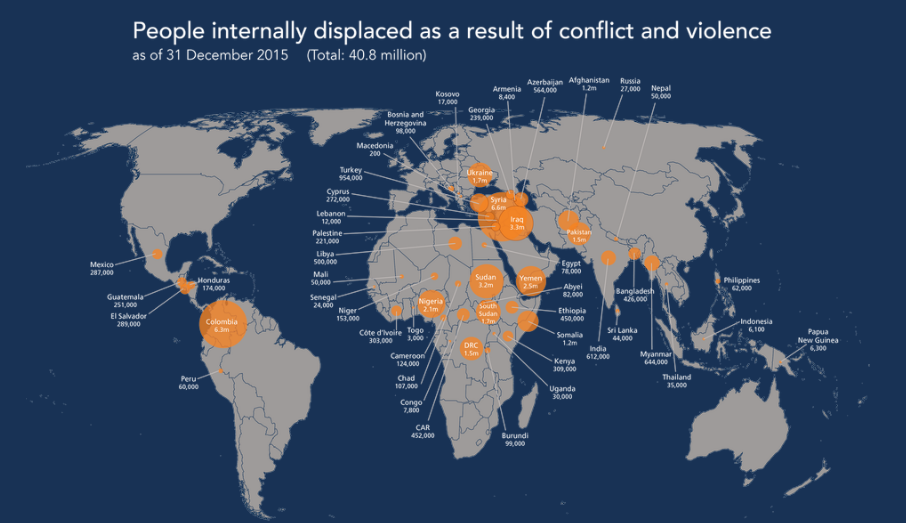 1. Risk of violent crime
While terror attacks capture the headlines and scares many people from traveling abroad, many more people die every year of “regular” violent crimes than off terror attacks. Latin American countries like Honduras or El Salvador frequently top those lists with homicide rates of over 900 per 100,000 citizens. Many Americans don’t realize that while they feel perfectly safe at home, the US is just mid-pack in those rantings with a homicide rate of around 40 – much higher than France (10) or Germany (8) or Singapore (3)! So, when people ask me whether it is safe to go to Paris or Berlin, the answer is an easy “yes” considering the overall crime rates! If you are planning a trip to a new country, check a list by country here! Please use it as general guidelines – countries have very different reporting rules, making these comparisons difficult. 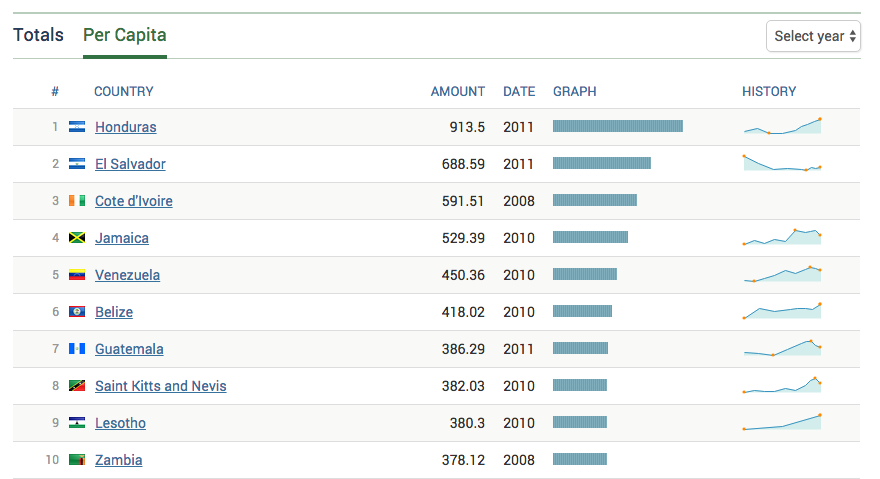 Safety Tips: Stay away from high crime areas, in the US, any hotel staff will be able to tell you if there are parts of town you shouldn’t wander around at night. In Western Europe, the areas around central train stations is often not the nicest.
Avoid standing out – in El Salvador for example, I’d wear basic clothes and leave my camera, watch, phone or wallet at the hotel before wandering about (or keep it hidden).

2. The targets of terror and violence
When assessing your personal risk, consider whether you are a target of local violence or terror. If you are the target of potential terror, like Westerners in Istanbul right now, your risk is up and you need to decide whether it is worth it or whether you want to wait – none of these cities or countries are going anywhere!
But, for example, I visited Thailand several times during internal strive, with violent protests and clashes or even domestic terror attacks resulting in tragic fatalities. But these were conflicts between different political or ethnic factions in very small parts of the capital that did not impact most people or visitors. You wouldn’t have known in the rest of the country, if you didn’t read Western news! Or, in the Philippines, there has been a travel warning for the South of the country – it is limited to a remote group of islands and there is virtually no impact on other parts of the country!
Safety Tip: Stay away from protests, demonstrations and conflict zones. I also advise to be respectful of police, military and their installations – they might not appreciate you taking photos are going into restricted areas!
For example in Turkey, Istanbul has been named in the travel warning, as well as the South East. If you still plan to visit Turkey, consider avoiding Istanbul and head to the beaches in the South West instead – your risk should be much lower in a small beach town with few tourists!

3. Be street smart
Many crimes are crimes of opportunity – the perpetrators are looking for “easy targets”! So, don’t be an easy target. Get informed about your destinations, read a guide book, an online expert blog for tips or travel forum for Do’s & Don’ts. Ask your hotel staff on arrival for safety tips. Know where you are going, try to blend in and don’t be an obvious tourist – leave the white socks and big camera at home!
Captain Obvious suggests to avoid anything considered a crime at the destination, for example drugs, prostitution, markets for illegal goods, etc! Yes, on the beaches of Bali you might be offered Marihuana – no, it’s not a good idea – Indonesia has the death penalty for drugs and is enforcing it regularly!

Bottomline: If you are traveling to a new country, learn about the country and the risks before you book. I have traveled to a number of “high risk” countries with travel warnings: Millions of people go about their daily lives in these countries without problems – and I didn’t have any either. I am very cautious, prepare as well as I can and am always aware of my surroundings. I personally draw the line at war/conflict zones and places where I’d be more likely to be a target of violence than locals are. Everybody has to make their own call on safety, but don’t let the terrible news headlines confine you to your home! There is much to see in the world and it’s not as bad a place as the news make it look like!