This week’s edition of Travel News focuses on news from the Philippines, including new planes and routes from Philippine Airlines, fresh uniforms for Cebu Pacific and V Air, a budget carrier from Taiwan, starting flights to Manila! 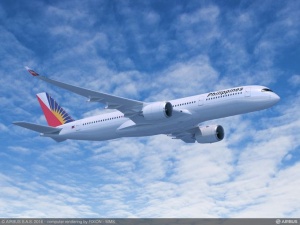 Philippine Airlines announced the purchase agreement with Airbus to order 6 new A350-900 long-haul planes for their fleet! They will be able to fly non-stop from Manila to New York or Toronto, both today served with a stop-over in Vancouver. They will also allow PAL to add new routes to Europe, where they today only serve London. Philippine Airlines is considering Paris (France), Amsterdam (Netherlands), Hamburg (Germany)  and Rome (Italy). I’m of course hoping that Hamburg will make the list, offering a non-stop trip home, as well as Amsterdam and Rome who have limited non-stop service to Asia today. PAL previously announced those routes – just to cancel the plans again after the new management takes over. In any case, the A350 won’t arrive till 2018, so I’m not holding my breadth either way. It’s great to see though that PAL is making some growth plans again!

Cebu Pacific is rolling out new uniforms. They consist of blue denim skirts with a prominent golden zipper in the front, yellow polo shirts and a colorful scarf for the ladies and blue denim pants and yellow polo shirts for the guys. Both get some fashionable hats – I hope we get to see those in the airport and not just in the media kit! They are a fresh new look and a nice upgrade from the old uniforms that were getting a little long in the tooth and screamed “low-cost carrier”. While still not as stylish as AirAsia, I’m looking forward to seeing them on my next flight!

V Air, the low cost carrier based in Taipei, Taiwan, is starting flights from Taipei to Manila’s Ninoy Aquino International Airport this week! They will fly Airbus A320/321 four times a week on Tuesday, Thursday, Saturday and Sunday, with flights leaving Taipei at 17:00h, arriving in Manila at 19:00h and the return flight scheduled for 20:00-22:00h. Promotional fares start at only $17, so get them while they are hot and give V Air a try (book here). I will try them as soon as I get a chance! (and, yes, that is really their logo!)