This week’s Travel News brings you some travel and technology news. While most travelers just want to fly from point A to point B, some enthusiastic flyers enjoy to fly no different planes and its exciting to see new planes enter service. Recently, Swiss Airlines received the world’s first Bombardier C100 passenger jet and Chengdu Airlines had the first commercial flight of the Chinese built COMAC ARJ21 regional jet – read on to find out more! 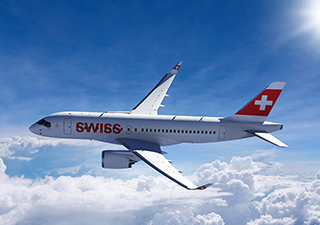 Bombardier has been developing and testing the C100 jet for years and after some delays common in the industry, the first one has been delivered to Swiss Airlines and will have its maiden flight on July 16th. The C100/X300 is a single-aisle jet with 100-150 seats, putting it between the smaller regional jets and the more common Airbus A320 and Boeing B737 most people have flown on. It has a 2-3 seat layout, so there are fewer of the dreaded middle seats. The jet also has some of the features of the Boeing Dreamliner of A350, like bigger windows and better fuel efficiency. Bombardier has sold 370 planes of the type and airlines like Canadian, Delta and Korean Air are among the customers, so people around the world will have a chance to fly it! You can find out all about the new plane, inside and out here!

A lot harder to try out will be the new COMAC ARJ21 regional jet. It’s the first passenger jet developed in China and sold to commercial airlines. It was “inspired” by the McDonaldDouglas MD-80 – a jet long built in China under license and incorporates a wing design by the Russian firm Antonov as well as engines and avionics from Western companies. The ARJ21 seats up to 90 passengers and, after a delay of more than 8 years, was delivered to Chengdu Airlines for domestic routes. It has also beens sold to Myanmar and Lao airlines, but without certification in Europe or the USA, you won’t see this plane in other parts of the world anytime soon! I wasn’t able to find detailed information in English – sorry!

I try to fly new planes as they enter service and report about them and how they improve your travel experience. You might read about the Bombardier C100/C300 here someday soon. But don’t hold your breath for a report of the ARJ21 – after a scary flight on a Chinese built propeller plane with Lao Aviation, I’ll wait for this one to get FAA certification before I get onboard!