Traveling to and from Manila’s Ninoy Aquino International Airport (NAIA) has been difficult, but after many delays, the much anticipated Skyway around the airport is finally open, drastically cutting travel times to the airport and between the terminals! Read all the good news after the break!

Everybody living in Manila has some traffic horror stories and many included trips to Manila’s busy airport. My personal worst trip was a ride to the airport form Makati, the financial center, to the airport for our Christmas trip. What usually is a 20-40 minute ride turned into a 2 1/2h nightmare, almost missing our flights! As the four terminals are placed around the single runway, to get from one terminal to another, you have to take the narrow road around the airport – together with thousands of cars, buses and jeepneys, resulting in endless delays. We personally ended up avoiding flights from Terminal 1 (International) and 2 (PAL) whenever possible due to the insane traffic and risk of missing flights! I also warned people to plan extra-long connection times of 3h or more to ensure you’d catch your connecting flight. 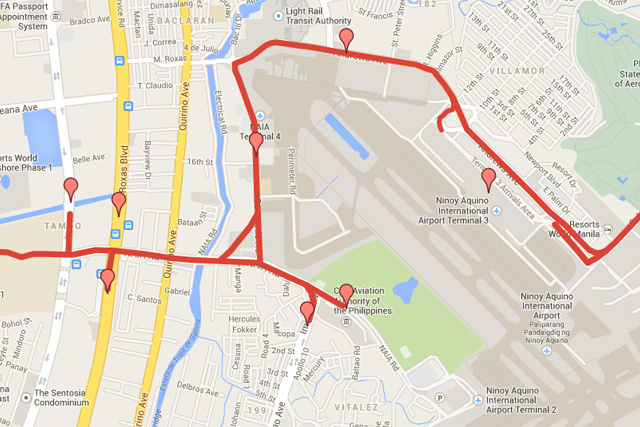 The traffic was made worse when construction on the elevated skyway started in May 2013, scheduled for opening in time for the APEC summit in 2015. While that never happened due to countless delays, the skyway finally opened on December 21, 2016 in a “soft opening”, now connecting from the Manila Bay to the Terminals 1, 2 and 3, as well as Bonifacio Global City and Makati! I had my first chance to try it when I returned from my Christmas trip and it took less than 5 minutes from Terminal 1 to Terminal 3 (instead of the typical 30-60 minutes) and less than 20 minutes to our home in Bonifacio Global City – a new record!

During the trial period of 1 month, access to the skyway will be free of charge, after that it will be PHP45 ($1) for cars – a small price to pay for the great time saving! There will be multiple on-/off-ramps and it will take first-time users careful attention to not miss an exit! Fortunately, any taxi driver working at the airport will know their way around soon enough, so visitors taking uber/taxi should not have any issues.
This – finally – makes Manila a viable connection-airport with Philippine Airlines and Cebu Pacific. You’ll be able to plan more reasonable connection times without having to worry that you’ll miss your connecting flight. Add to that the renovated Terminal 1 and visitors will have a much more positive experience going forward – what a great start into the new year!