Allegiant Air, a low-cost carrier in the US, has a history of questionable safety policies and frequent safety incidents, yet the FAA has not taken any action and the carrier maintains an ok 5-out-of 7 safety rating. Yet the Tampa Bay Times published did in-depth research of air safety incidents in the US and came to the shocking conclusion that Allegiant Air Planes fail more than those of other US airlines – what should you do?

I regularly write about travel and airline safety. I researched the tragic crash of AiAsia QZ8051 and recommended to avoid travel to Istanbul just last week. While airline statistics prove that air travel is the safest form of travel compared to bus, train or car, there are significant differences between airlines and I do recommend to consider airline safety when purchasing an airline ticket, not only price or comfort!

Previously, The Washington Post reported that “About 300 pages of Federal Aviation Administration records for Allegiant show a pattern of safety problems that triggered a relatively large number of aborted takeoffs, emergency descents and emergency landings from Jan. 1, 2015, through this March.” and “Allegiant had about nine times as many serious incidents over that period as Delta Air Lines had with similar types of planes of similar vintage — even though Delta was flying about three times as many such planes, according to a Washington Post analysis of FAA documents relating to both companies.” . And despite evidence, that Allegiant management was pushing their pilots to save money and time over safety concerns, they insisted that there is no safety issue.

Allegiant is flying a fleet of very old MD-80. While most other airlines have taken these planes out of service and replaced them with newer Boeing B737 and Airbus A320, Delta and American airlines are also still flying some of them – yet they have much fewer incidents than Allegiant, so the old planes are not an issue by themselves, it’s the maintenance and operation that determines the safety as well.

After a number of scary incidents involving Allegiant planes, the Tampa Bay Times built a database of more than 65,000 records from the FAA to compare the incidents across different airlines in the US and here are their findings:

Allegiant’s fleet has the highest rate of forced landings due to mechanical problems in the US – by a factor of almost 4 compared to the average: 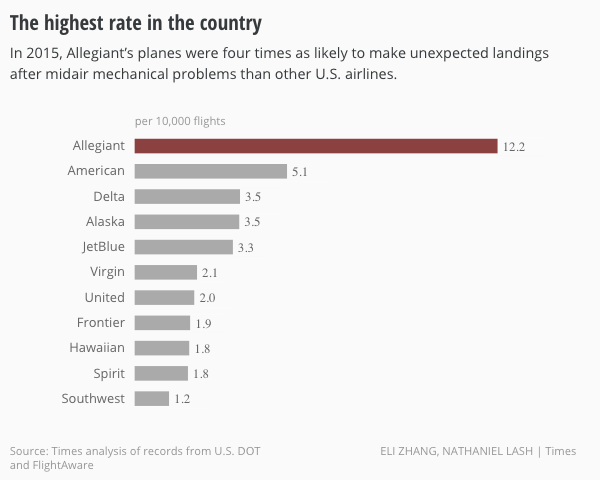 Allegiant Air is running a fleet of MD-80 planes, bought second hand, with an average age of 27 years (other carriers average 12 years). A fleet that old requires meticulous maintenance and the statistics suggest that Allegiant is cutting corners in maintaining their fleet to achieve the low fares they compete on.
The research shows that countless incidents were due to failing parts, were insufficiently repaired – resulting in follow-on failures of the same part. That is scary and indication that maintenance is not ensuring safe operation!

I am a fan of the low-cost carrier model and the most successful airlines in that market use modern, fuel efficient planes, usually a single model to simplify operations, use modern IT systems to save cost, sell tickets directly to avoid fees, run point-to-point routes and offer no-frills service. But they are not cutting corners by saving on maintenance, pilot training or safety procedures. Southwest Airlines in the US or Ryan Air in Europe have proven that you can be safe and cheap.

Allegiant appears to have cut corners in their attempt to offer low fares with old planes. They have recently announced plans to replace the aging MD-80 with new Airbus planes flown by many other low-cost carriers. That’s a good first step, but until they have retired their old fleet and improved their maintenance record noticeably, I wouldn’t set foot on one of their planes.

I like a good fare as much as the next guy, but I won’t sacrifice safety for a few dollars. I suggest you consider airplane safety as well and choose your airlines wisely!
You can find more details in the articles of The Washington Post and The Tampa Bay Times. I’m glad that these reputable papers have conducted the professional, investigative research to bring this important information to light!
Each of my airline overviews contains the Airline Safety Rating. While it is not the final word on safety, it is one piece of information that can help you make an informed buying decision and travel safely!

What do you think? Would you fly Allegiant Air? Are you considering airline safety when buying a ticket?