Recently, United announced their new Polaris Business Class with pod-like, fully-flat business class seats in a 1-2-1 layout with lots of new amenities in the air and on the ground. Now, Delta is trying to top that with the launch of an industry first: Business Class Suites with doors previously only found in the First Class of premium carriers like Singapore Airlines. If an SQ First Class ticket is out of reach, maybe this is the next best thing? Let’s look at the full announcement what you can expect!

Emirates and Singapore Airlines caused a lot of buzz when they started to roll out fully enclosed suites for total privacy in their First Class and everybody wanted to try it. Now, Delta is planning to bring this most talked about symbol of luxury to Business Class, with a launch of their Delta One Suites in fall of 2017 on planes operating long-haul flights. Here is what Delta has announced in their press release: 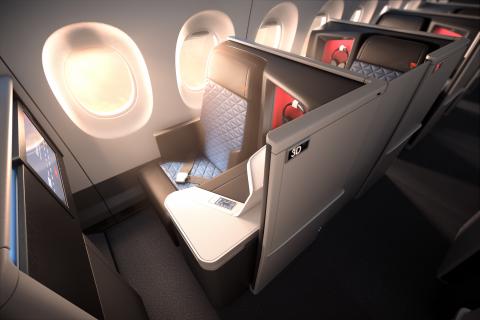 It appears that Delta is starting from the Thompson Vantage XL seat, a staggered seat with extra width and one of my favorite designs, and has customized it with doors, memory foam cushions and some other features. That does indeed make for an excellent seat with a lot of privacy. The Vantage XL offers a bed with a length of 79in (2m!) and a width of 23-24in (up to 61cm), although Delta is coy about the actual width of their seat and has not provided that information “for competitive reason”. The middle seats will have a privacy divider, incase it’s not a couple but two solo-travelers occupying them. While the press release claims “full height” doors they end at the top of the seatback and don’t go as far as in Singapore Airline’s Suites. I personally enjoy the privacy when traveling solo and do think that the standard seats already offer a lot of privacy. Whether these doors will feel claustrophobic or indeed more private remains to be seen, but I’m certainly looking forward to finding out! 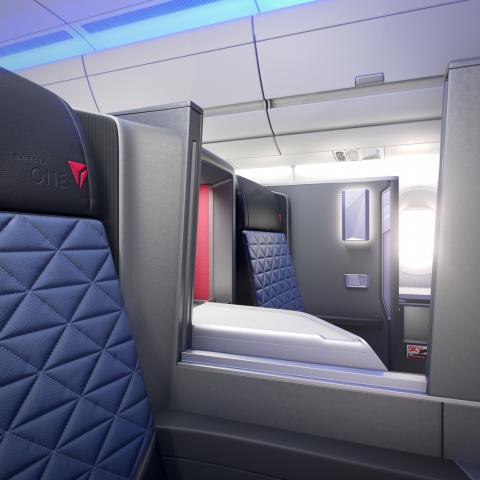 The Delta One Suite will also feature small storage compartments for all the things you might want to have close during the flight, a very large 18inch screen and customizable lighting. The memory foam cushion sounds like a good option to make sleeping more comfortable. All in all, this is a very exciting upgrade of the business class experience on Delta and could very well be one of the best business class seats out there. 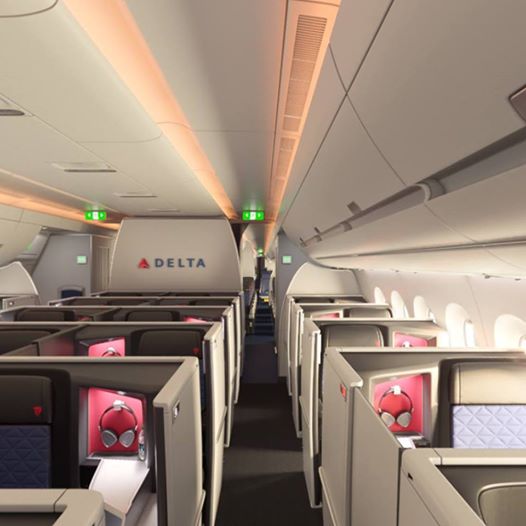 Now, when can you first try these out? Delta is rolling the suites out on their new Airbus A350 planes (25 planes on order), expected in September 2017. Subsequently, they will install the same suites on 18 Boeing 777 planes. Unfortunately, they will not be rolled out to the existing B747, B757, B767 and A330, who will soldier on with the current fully flat, narrower and door-less seat. Delta has a total of 189 of these planes in service or on order, so less than 20% of the long-haul fleet will have these new seats. That is one of the reasons I avoided Delta in the past – on a trip a few years back, I had four different seats on four different legs of the trip! This inconsistency makes it difficult to plan for a trip, because the airline can always swap planes in the last minute, leaving you with a “downgrade” to a lesser seat. That’s especially irksome, if you went out of your way to fly the new configuration!
And one downside about flying Delta will not go away with the new seats – and that’s the poor service when compared to leading carriers like Singapore Airline and the outdated IT infrastructure that brought the recent system outages with thousands of flight cancellations and delays! You’ll also continue to earn mostly worthless SkyPesos in Delta’s reward program and I don’t have high hopes to score one of these seats at a reasonable reward price!

Overall and despite these gripes, I consider this a positive announcement and a true enhancement of the Business Class experience. Delta is continuing there efforts to position themselves at the top of the US carriers and that’s laudable. Let’s hope they will also make investments into less buzz-worthy topics like their ancient IT systems and their staff to create a truly enhanced end-to-end experience! I’ll look forward to the route announcements and hope that I’ll get a chance to try it out sometime soon after launch!
For more details, check out the Delta Press Release and the New York Times story that broke the news!