Flying with All Nippon Air or ANA for the first time? Here you can find all the facts & figures about ANA, the experience you can find in ANA Economy Class, ANA Business Class or the ANA lounges, as well as the highlights of their rewards program, ANA MileageClub! 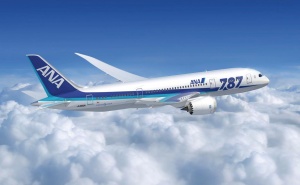 Facts & Figures? All Nippon Air (ANA, airline code NH) is based out of Tokyo’s Haneda and Narita International Airports (HND, NRT). They currently serve 81 destinations in 15 countries with a fleet of 214 planes.
Skytrax rates ANA a 5* Airline, their highest ranking, and Airline Ratings gives them a 7 (out of 7) safety rating, also the top rating available.

The Experience: ANA is considered one of only 7 5* airlines as rated by SkyTrax and has been in the top 10 list for the last four years, putting ANA far ahead of US carriers and you can expect a good travel experience when purchasing a ticket. I especially enjoyed my flight in their Business Class, featuring some of the most comfortable business class seats to sit, lounge or sleep on the market! I was less excited about ANA Economy Class, with a tight 31 inch seat pitch (for somebody as tall as me at 6ft3) and mediocre food! Their lounges at Haneda and Narita are a nice place to wait for your flights. Overall, I’d fly and recommend ANA Business any day and ANA Economy for anybody 6feet tall or less!

The Rewards: With one of the best Business Class products in the sky, it’s worth considering ANA for reward flights. While you can book them with StarAlliance partners like United or Lufthansa, ANA’s MileageClub program does have some advantages: They have sweet spots for business class between Europe and Asia or North America, making it much cheaper to redeem than on United! You can also earn more miles, because ANA is still a distance based program, rather than revenue based (like United). Add to that the option to earn and transfer points from credit cards, and you have a great alternative to other reward programs. Intrigued? Read all the details about ANA MileageClub here!