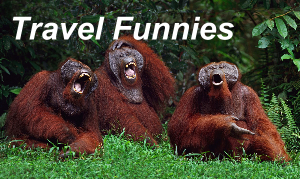 Having been a business traveler for more than 20 years, with a few close calls when trying to catch a flight to an important meeting or to get home after a lot of work, I appreciate the determination of people to make it to their plane, no matter what… but there are a few signs that you have missed your plane – and the plane door being closed is one of them!

Apparently, a Chinese lady, trying to catch her AirAsia flight from Kuala Lumpur to Jakarta didn’t think so. She was determined to get on her plane, charged down the jet bridge and tried to open the plane door herself! Security is trying to stop her and, after a lot of kicking and screaming, walks her away, allowing the plane to depart!

Only once in my life, and that was almost twenty years ago, did I see a friendly agent re-open the plane door. I arrived after a business meeting at Frankfurt Airport (if you have been, you know how huge it is!) 10 minutes before the plane departed. At that time, there were no lines and less security worries, I ran to the gate (suit & tie no less) and arrived at the gate, just to find the plane door closed. I pleaded with the agent and – god bless her heart – she agreed to walk me down the ramp and re-opened the door.
I can’t imagine that happening today, with busy airports and tight security, and charging down the the ramp, fighting off security in the process to get on board might be a little over the top! So, don’t do what this lady did and resign yourself to the fact that you have missed your flight. Many airlines close the plane door 10 minutes and I’d recommend to be at the gate at least 20 minutes before departure! Getting arrested will be more expensive than a new or changed ticket! Travel safely…