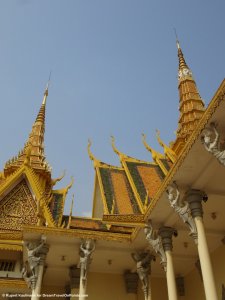 The Royal Palace in Phnom Penh is one of the most impressive architectural and historic highlights of the city. The Palace was built as the residence of the Cambodian Kings in 1866 and today is again occupied by the current King and the Royal Family. The golden roofs and towers are visible from the river promenade and many spots in the old town. It’s open to visitors and should be high on your list of things to visit in Phnom Penh!

After the establishment of the French Protectorate in Cambodia, the Cambodian capital and seat of the King moved to Phnom Penh and the Royal Palace was built in 1866, with a number of buildings added over the years. The palace follows traditional Khmer architecture and incorporates Thai, French and historic Angkorian touches, making it an impressive and unique complex. 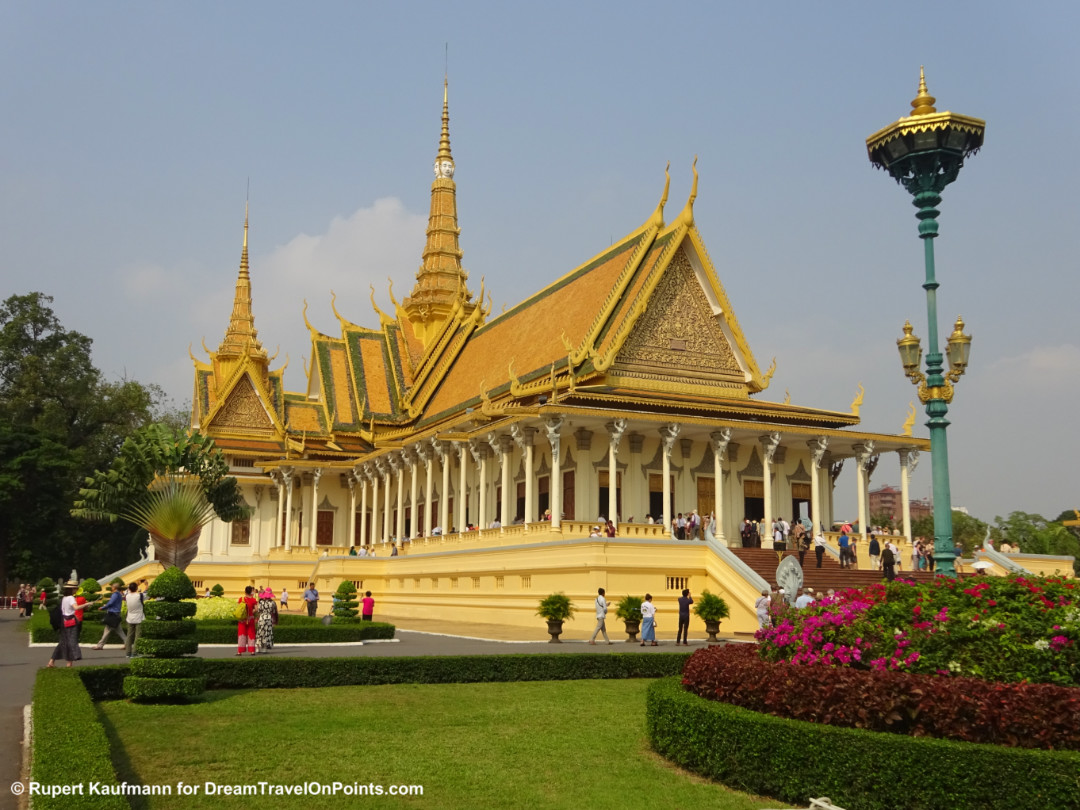 You’ll enter the Royal Palace past the walls surrounding the compound and start in the Central Compound, with the beautiful throne hall with its white walls and columns, stepped roof and gleaming, gold-colored tower surrounded by lush, green gardens. It is still used for royal or state ceremonies, but on most days you can peek inside to get a good view of the hall! 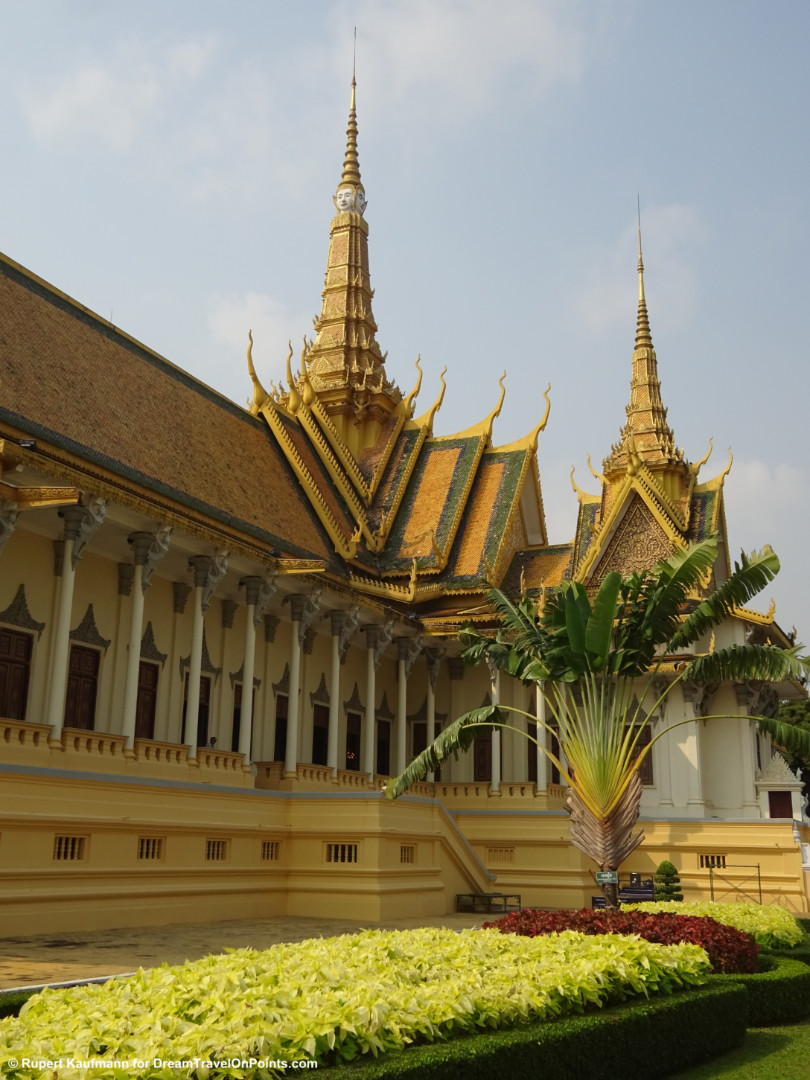 To the left of the throne hall is the Moonlight Pavillion that’s still used for Khmer dance performances or royal banquets. It’s a large, open-air structure, although without the intricate decors of the throne hall.
Under renovation during my most recent visit, the Napoleon Pavillion was a gift of France in 1876 and is constructed right next to the wall facing the river! 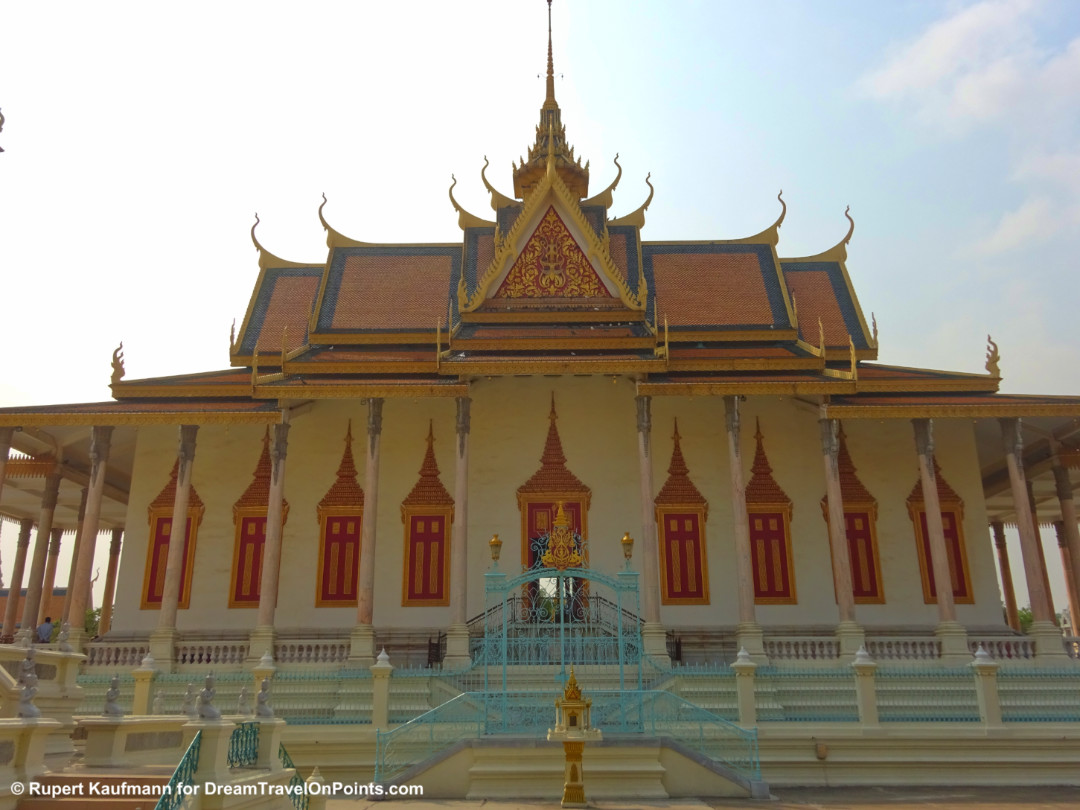 Separated by two walls, the Southern Compound is also open to visitors and you can see the Silver Pagoda with the Emerald Buddha here, as well as a statue of King Norodom.
Near the entrance is a massive wall paining with detailed scenes of Khmer history – it’s worth a closer look! 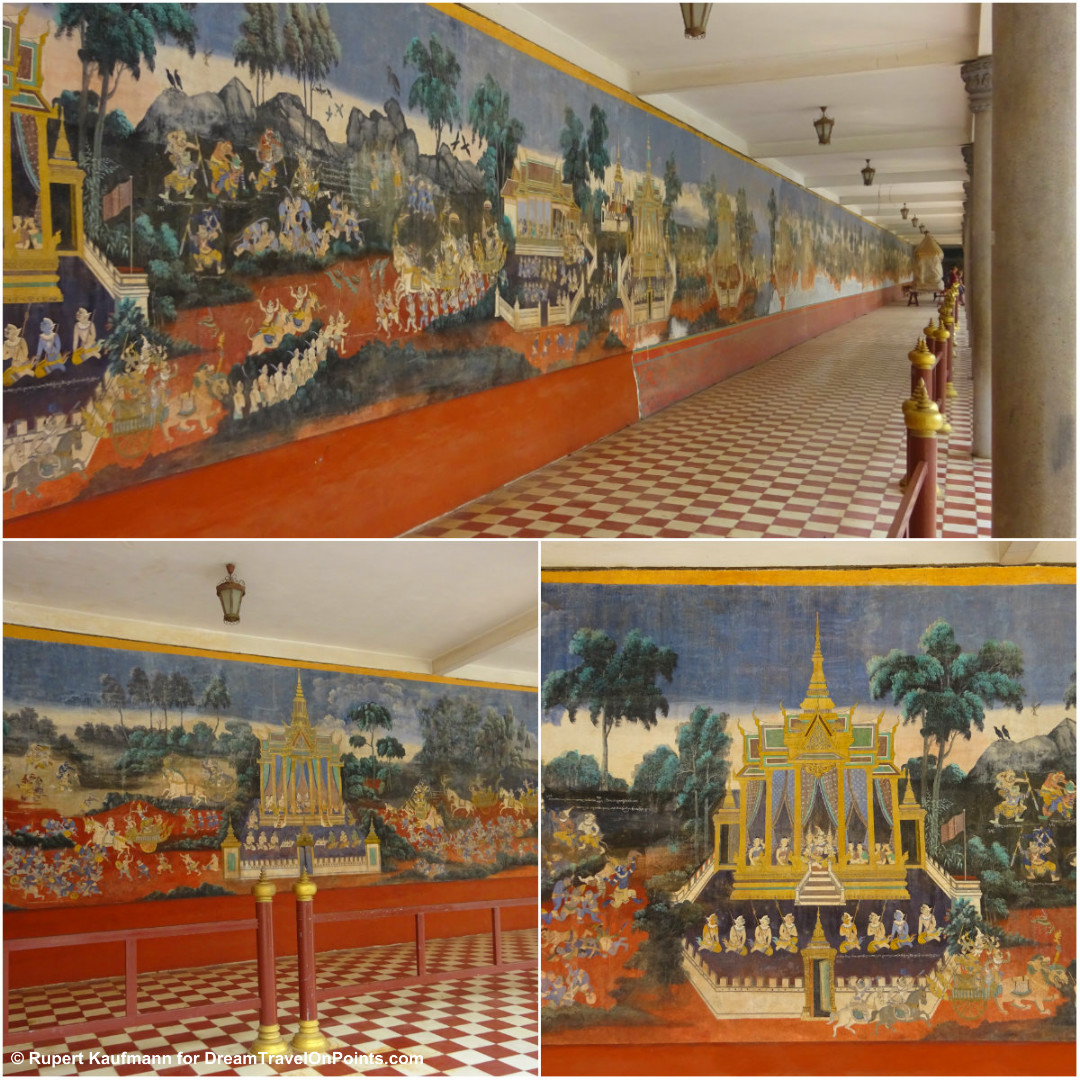 You’ll also find a model of Angkor Wat that provides a good perspective of the massive temple from the Golden Age of the Khmer Empire. 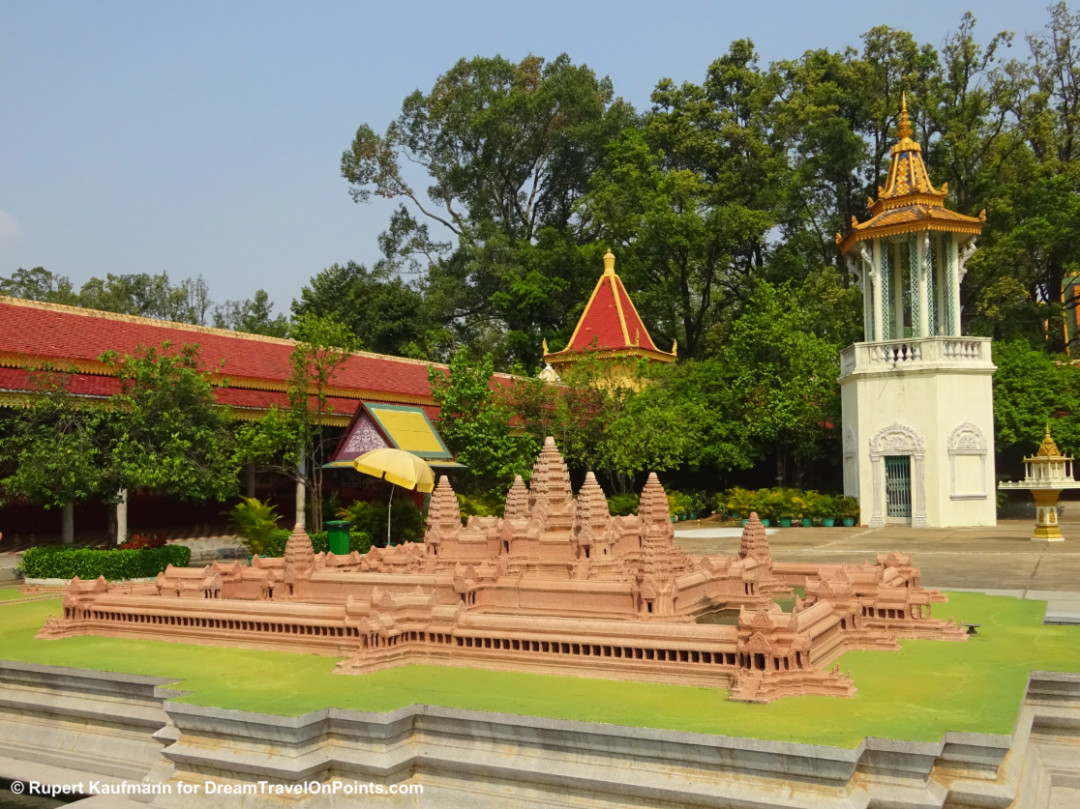 If you need a break from walking around (or all the tour groups), you can take a break on the little hill with a temple on the Southern side of the compound. Few people make the way up the stairs and you can relax a little on a bench among the trees!
At the exit, you’ll find additional exhibitions of royal carriages, golden thrones, elephant statues and other artifacts. 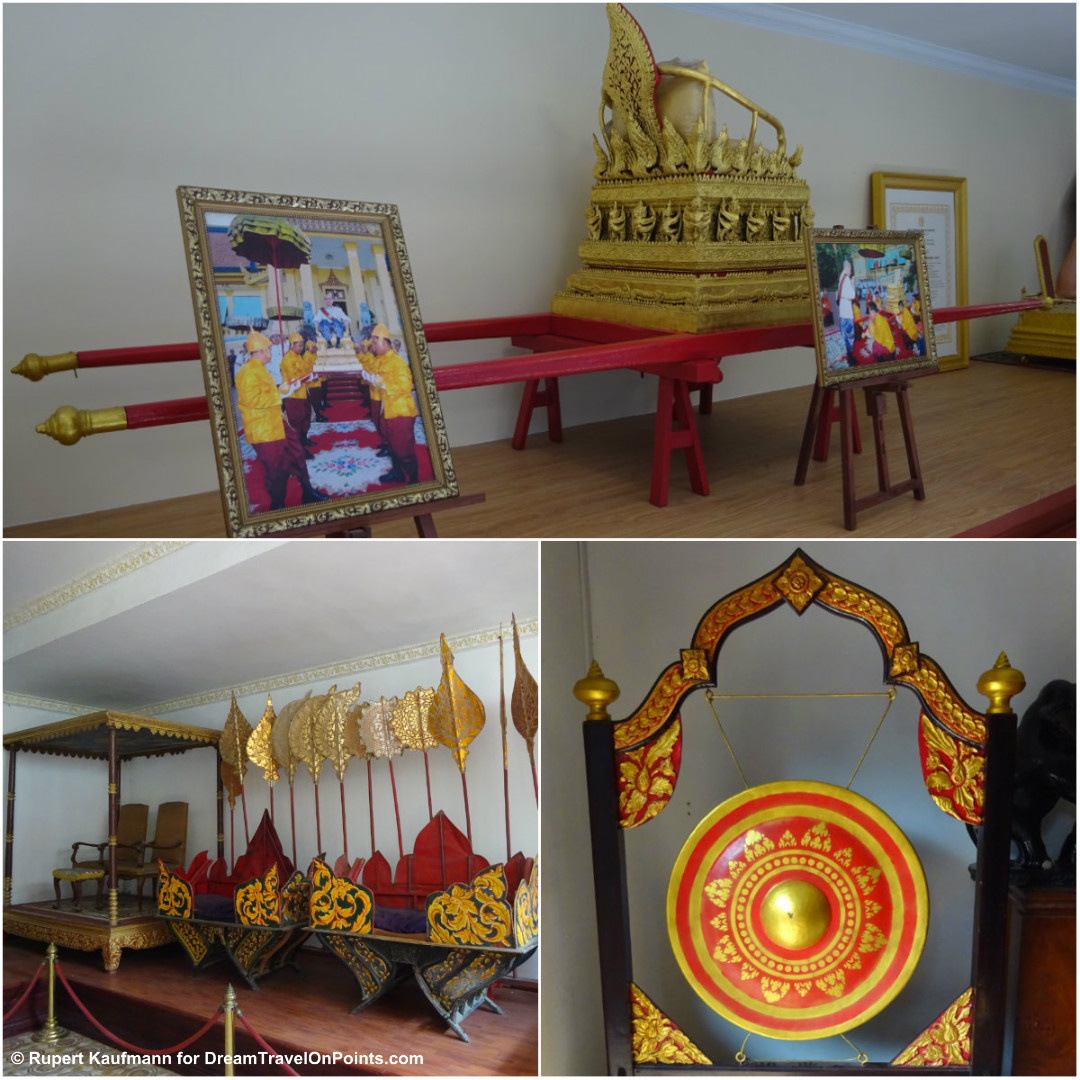 The Inner Court to the West with the private quarters and the Khemarin Palace to the North are of limits to visitors.

Travel Tips: The Royal Palace is open daily from 8:00-11:00h and 14:00-17:00h as of April 2018. I recommend to go early to avoid the crush of tour groups arriving a little later. The entrance fee is 40,000kip ($10) which is pretty steep for Cambodia. You can enjoy a walk through the compound on your own, plan at least 1h to see the majority of buildings. Or you can  hire a guide at the entrance for an additional $10 and get more in-depth information of the palace and pagodas – worth the money, especially as a couple or group!
Please dress respectfully, shirts covering your shoulders and pants covering your knees – you are visiting some of the most revered sights of the Kingdom!
Bring some water – it’s hot in Phnom Penh and you are exposed to the sun for most of your visit.
You can combine your tour to the Royal Palace with a visit to the National Museum nearby for insights into earlier Khmer history and a collection of artifacts going back thousands of years!