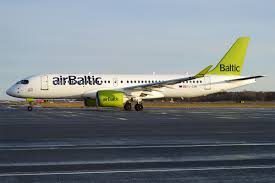 OAG has conducted an in-depth analysis of the on-time performance of airlines across the world and the winners are airbaltic (90.01%), Hong Kong Airlines (88.83%) and Hawaiian Airlines (87.24%). Several Low Cost Carriers (LCC) also make the top 15, including European Vueling, Jetstar Asia and Brasilian Azul. Two of my favorite airlines, Singapore Airlines and ANA perform also very well. Find out who else made the Top 15 and other details below!

While we all have that one terrible experience that made us to swear we’ll never fly airline xyz, I like the sound research of large numbers – and OAG certainly delivers. They reviewed 57 million flight records for all of 2017 – certainly a lot better than the experience of even the most avid frequent flyers or bloggers! They only looked at airlines that had records for at least 80% of their flights and meet certain size criteria. OAG considered any flight that arrived with less than 15 minutes delay as “on time”.

Without further ado, here are the top 15 across all airlines in 2017: 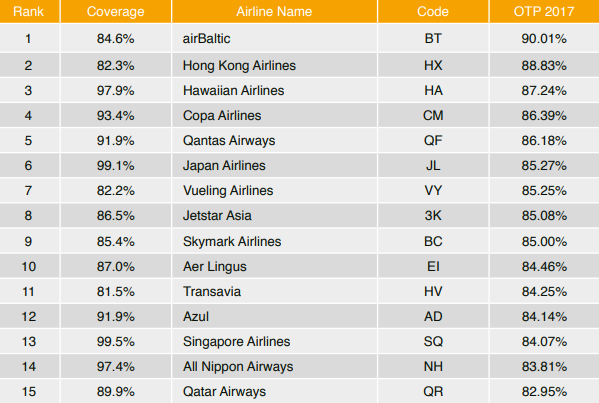 The top three are from Europe, Asia and North America, so all major regions are represented and it’s noticable that smaller airlines are taking top honors!
Japan Airlines and All Nippon ANA are the most on-time mega-airlines (or very large carriers), underpinning the reputation of Japanese businesses for flawless execution. My favorite airline Singapore Airlines also makes the list with  a solid 84% on-time arrivals. None of the big European or US airlines make it into the Top 15 – a sad state of affairs!

While many people avoid LCCs, their bad reputation is not deserved uniformly – several low-cost carriers make the list with much better performance than their mainline competitors – inclucing Vueling, Jetstar Asia and Azul!

While you can have a delayed flight on any airline due to unforeseen circumstances, this data proves that some airlines are just better at managing their operations. Most travelers only look at price and flight schedules to book their flights, but factors like cabin comfort, onboard service or operational excellence also deserve to be taken into account. So, the next time you book an important flight, take a peek at this list to pick the airline most likely to get you there on time!

You can find the full list, also sorted by size and type of airline as well as region here!
If you’d like to get more travel related news or deals like this from around the world, please follow me on Twitter – I’m posting news daily, so you can stay up to date on the world of travel with my Twitter updates! Or, for a weekly update, sign up for my newsletter for a Sunday Summary!