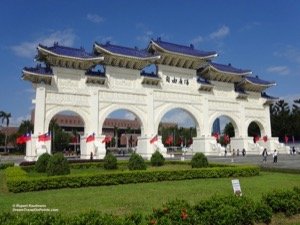 OAG analyzes the on-time performance of the world’s airlines and airports and for the first time, also published the world’s busiest domestic and international routes – as well as what your chances are to arrive on-time and what airlines have the best performance no these routes! The world’s busiest domestic route is between the two South Korean airports of Jeju and Seoul with 64,991 flights in 2017. The world’s busiest international route is between Hong Kong and Taipei, Taiwan, with 29,494 flights in 2017. Find out the other crazy busy routes around the world, which ones are the most delayed and which airlines you should choose to get there on time!

OAG analyzed 58 million flight records in 2017 and considered any flight with less than 15 minutes delay as “on time”. The research of the busiest route is especially interesting for travelers, as it also provides insight into how the different airlines serving these routes do with regards to on-time performance: While many airlines blame delays on weather or the airports and Air Traffic Control, the performance clearly proves that airlines can make a difference with well-run operations!

Six of the seven busiest international routes are in Asia, connecting the mega-cities of the region with hyper-frequent flights: 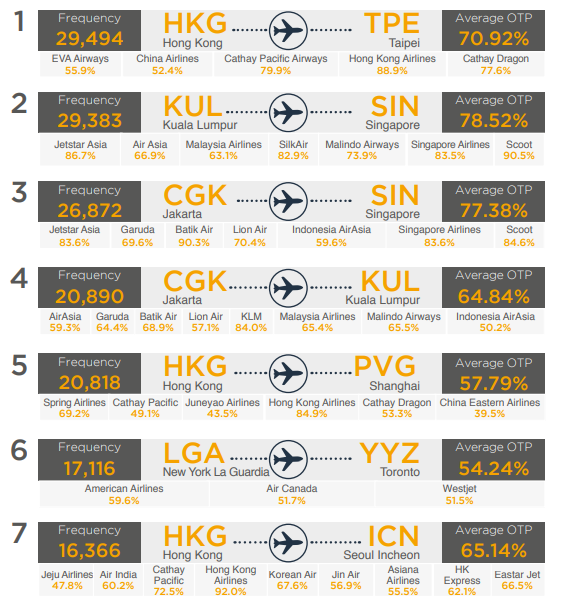 On the busiest route between Hong Kong and Taipei, Taiwan, it’s interesting that the Hong Kong based airlines all do significantly better than the Taipei based carriers with regards to on-time performance.
On the second busiest route between Singapore and Kuala Lumpur, the low-cost carriers Jet Star and Scoot beat out the full-service carriers Malaysia Airlines, Singapore Airlines and Silk Air with regards to on-time performance – an embarrassing black spot on Singapore Airlines white vest!
The busiest route in North America is between New York’s La Guardia Airport and Toronto – and a shockingly bad on-time performance of only 54.24% on-time. American Airlines is the least bad at 59.6% on-time! 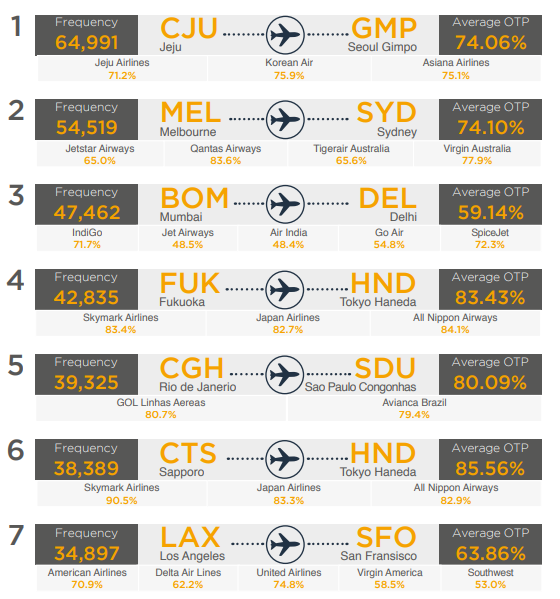 On the world’s busiest domestic route between the Seoul and leisure destination Jeju, the competing carriers are very close in on-time performance.
More interesting is the picture on the second-busiest route between ever-competing Sydney and Melbourne: Flag carrier Qantas has a significant lead with 83.6% over Virgin Australia (77.9%) and the two low-cost carriers in the 60s!
On the third-busiest route between Mumbay and Dehli in India with 47,462 flights in 2017, all airlines do poorly with an average on-time performance of a dismal 59.14%. There is a wide gap though between the worst (Air India at 48.4%) and the best (Spice Jet, 72.3%), so it pays to pick the right airline for the trip.

This OAG Report is very valuable as it allows you to see which airlines are most likely to get you to your destination on the world’s busiest routes. It eliminates the impact of weather or airport operations, making it very clear which airlines do better than others. If you fly a route frequently, it’s worth considering this data the next time you choose an airline.
You can find the full OAG report here.
If you’d like to get more travel related news or deals like this from around the world, please follow me on Twitter – I’m posting news daily, so you can stay up to date on the world of travel with my Twitter updates! Or, for a weekly update, sign up for my newsletter for a Sunday Summary!