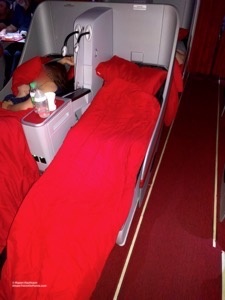 I have been looking for a chance to fly Air Asia’s Premium Flatbed seat, their business class offering, it’s rated by SkyTrax as the World’s Best Premium Cabin on a low-cost carrier. I had a chance to try it out on an overnight flight from Kuala Lumpur to Sydney and for a fare that wasn’t much more than other carrier’s economy class, you get a flatbed seat to sleep in. Read my review to find out what to expect from Air Asia’s Business Class!

Predeparture/Ground Service: Air Asia advertise the premium cabin as “Premium Flatbed Seat”, and not a business class. That’s fair, because you don’t get many of the perks you’d expect in business class. You do get 40kg of check-in luggage (which would cost $50 in economy), in addition to the free carry-on. You also get to pick your seat ($10-40 in economy). Similar to business class on other airlines, you have a priority check-in line – but don’t expect the same service. In my case, the priority check-in was shared with “customer service” and while there was only 1 person in front of me, they seemed to be handling a difficult problem, because I was still standing there 15 minutes later. The other agents ignored me, so I gave up. Fortunately, you can print your boarding pass and go to security without seeing an agent, if you don’t have any special questions or need to check luggage.
You also should receive priority boarding, but between agents not enforcing the boarding rules or the use of bus gates, your chances of boarding ahead of the general chaos are about 50%. On this flight, I was connecting from another Air Asia flight that was delayed by more than 3 hours, arriving at the gate only 10 minutes before my scheduled departure. The flight attendant as well as the ground staff were completely unhelpful, from providing false information to just telling me “you won’t make it” instead of answering the question for the departure gate! Knowing that Air Asia is notoriously bad in handling irregular operation issues and missing my flight would have meant spending my own money on a hotel, food and a new ticket, I raced through the huge low-cost carrier terminal KLIA1, passed two security controls (god only knows why there are two) and reached the gate with the door already closed, but 5 minutes to go. The gate staff wasn’t impressed, but between me telling them that their inbound flight was 3h late and my looks that could have killed, they called the plane (plane door was still open), agreed to let me board and re-opened the gate door. I plopped into my seat with 2 minutes to spare…

Service Onboard: I always found the inflight service to be friendly on AirAsia and this flight was no exception. The flight attendant serving business class came around to ask whether I wanted my meal at the start of the flight or before landing and even considered my request to have it as late as possible prior to landing to maximize my much needed sleep! Don’t expect any help storing your luggage or hanging your jacket, a fancy menu or pre-departure drink – you are on your own! We did each find a small bottle of water at our seats before departure to keep you hydrated during the flight.
If you’d like another drink, you’ll have to pay for those. There are soft drinks and alcoholic drinks on the menu, including beer, wine, prosecco and hard liquor. 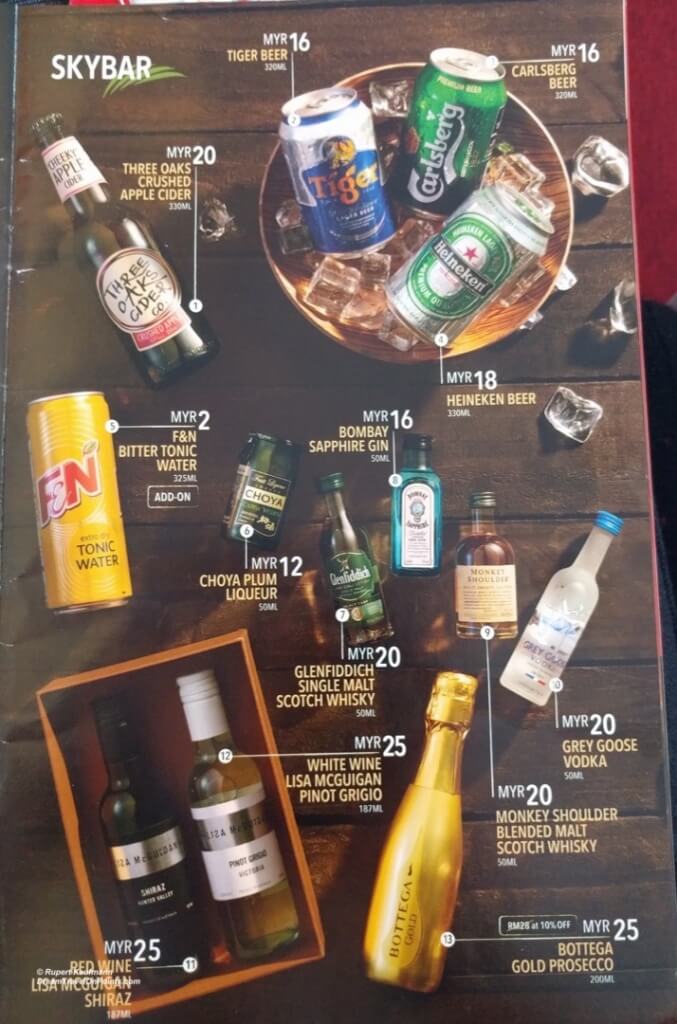 The meal is included in your premium ticket, but you are ordering from exactly the same menu as in economy class. I picked the “Big Breakfast” with eggs, sausage, potatoes, mushrooms, beans, a soft roll and butter, with a cup of coffee and a cup of orange juice. The food didn’t look quite as good as in the menu picture and was average for a low-cost carrier economy flight and not comparable to anything you’d find in business class on a full-service carrier. The taste was ok, the portion was pretty small and there was no refill on the coffee or juice – you’ll have to pay extra for anything else you want. It’s all served on a plastic tray with plastic/paper cup and plastic cutlery and the staff didn’t stop by to ask if you’d like anything else, once they dropped of the tray.

There is no entertainment offered other than the onboard magazine, but there is a power outlet at every seat, so you can keep your smartphone, tablet or laptop charged to read or watch a movie!

Hard Product: Air Asia X, the long-haul subsidiary operating these flights, is exclusively using Airbus A330 planes. The premium flatbed seats are arranged in a 2-2-2 layout with only two rows for a total of 12 seats. 75% of the seats have direct aisle access and there is enough legroom to get out of the window seats, if you need to. The cabin is typically Air Asia with advertising screaming at you from every available surface – not quite the experience you’d want in a premium cabin, but it helps to keep the fares low. Your storage is in the overhead bin 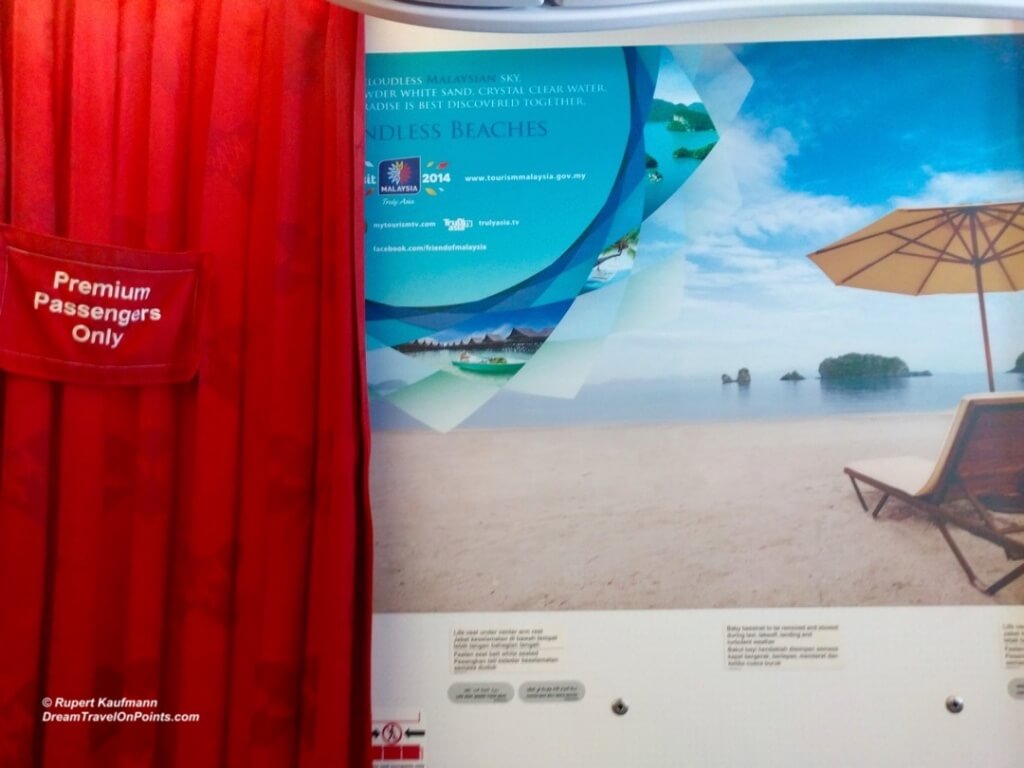 The seat is really what you pay for and it’s surprisingly nice. It’s an angled flat seat with a 60 inch pitch and 20 in width, plenty of space for me! It reclines from the seating position through a lounge position to the angled-flat sleeping position and I found it very comfortable to sleep in! In fact, similar to the angled-flat seats you find on Singapore Airlines’ or Thai Airways’ seats on regional routes! The provided blanket was nice and thick and the pillow big enough in combination with the headrest to be comfortable. The seat controls are as simple as they get and worked flawlessly. 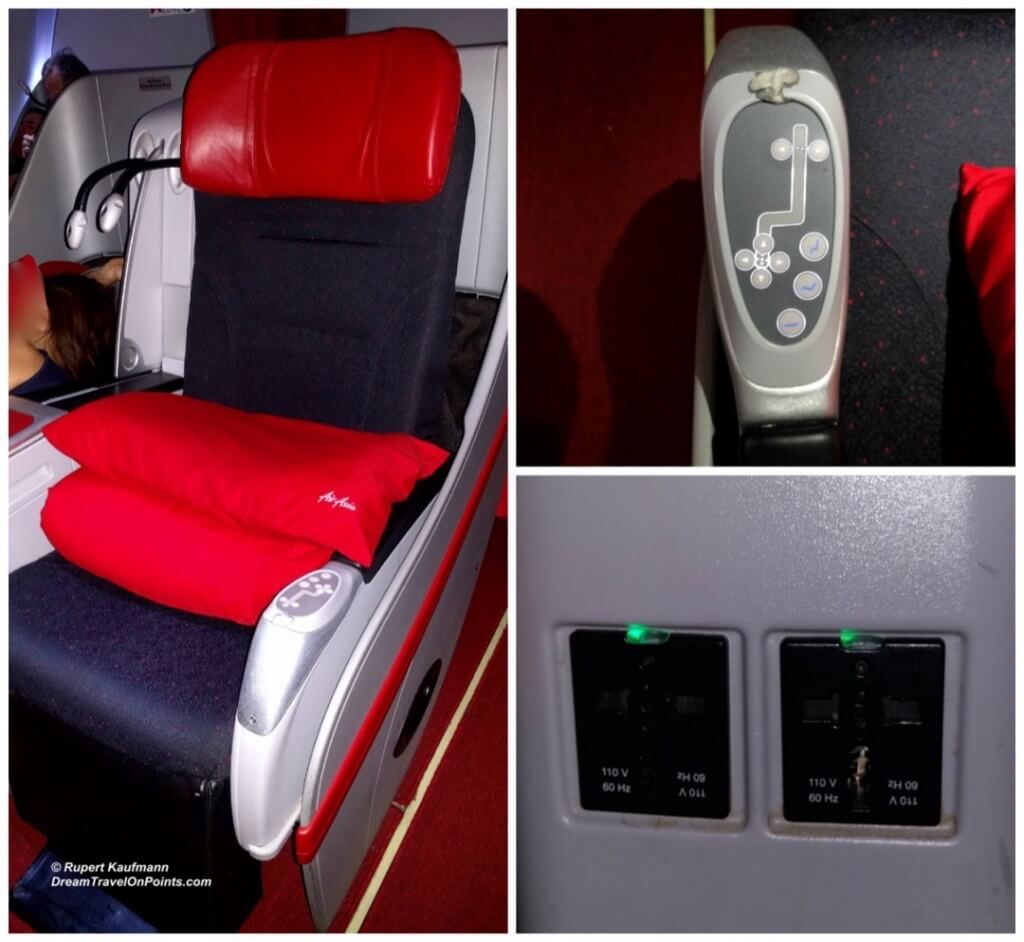 Conclusion: When buying Air Asia’s Premium Flatbed Seat, I’d recommend to look at it as economy class (review here) with a really, really nice seat – because that’s what you are buying. The ground and onboard service, food and entertainment are just the same as in economy class. But the seat is indeed the best seat I’ve seen on any low-cost carrier and deserving of the SkyTrax award. It’s just as comfortable as other airlines angled flat seats used on regional routes in Asia. I slept like a baby (and so did the actual baby in the seat next to me) and would highly recommend it on overnight flights. You can purchase the fare outright (like I did) or upgrade as late as at the airport for $250 per flight. AirAsia also sometimes offers an Upgrade option, based on availability for even less. I’d spend that for a good night’s sleep in a heartbeat, even if the rest of the flight experience is all-economy – it’s less than what full-service carriers charge for an economy ticket and for me the seat is the most important feature on an overnight flight.
On the other hand, I didn’t upgrade on my daytime return flight: I didn’t want to sleep and because you are getting the same service and food, there was not enough value for me to upgrade.
If you’ve always wanted to try a flatbed seat or just enjoy some extra space on a crowded plane, Air Asia X’s premium flatbed seat is a great option and a bargain!