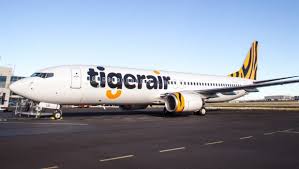 I love to travel, I love to save some money – and, ok as a former math major, I love some good statistics, so reading the latest study of the cheapest airline in the world based on the price per kilometer flown was lots of fun for me. For anybody less inclined to digg through the numbers, the winner is TigerAir Australia with an average cost of 0.06 cents/km for their domestic-only flights. The runner up is Air Asia X, the long-haul subsidiary of the best low-cost carrier several years running. To find out the other cheapest airlines, the most expensive ones and some surprises on the list, read on!

Rome2Rio, my favorite site to find the best train, bus or flight between two places and all your options, conducted the study of flight cost. They looked at millions of economy ticket price searches across hundreds of airlines in January and February 2018 and compared the cheapest tickets available. Expensive tickets more than 2x the cheapest were considered non-competitive and excluded.

As with any study, you can find issues, for example longer flights tend to be cheaper than shorter flights, domestic cheaper than international, plane equipment can vary and some airlines operate in monopoly situations. But this study provides some great data points and insights. So, without further ado, here is the full list of the top 50 cheapest airlines, for domestic and international flights: 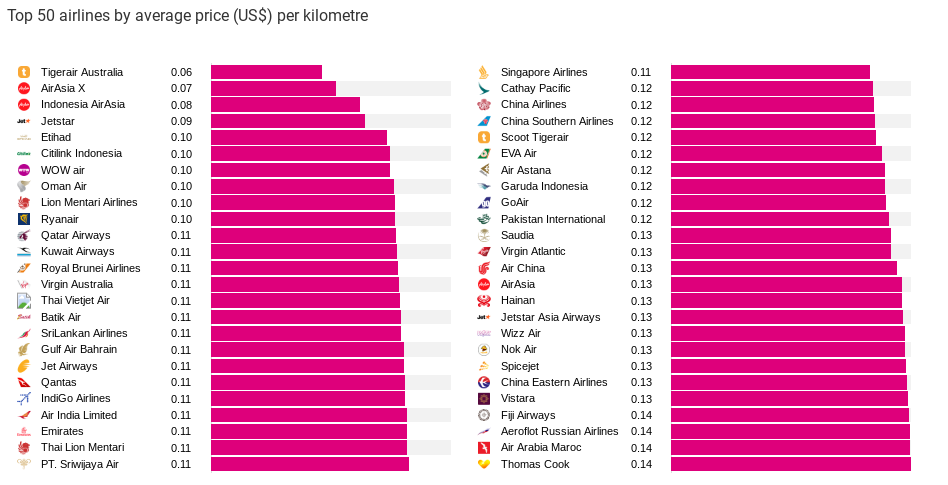 The cheapest of them all TigerAir Australia with their long, domestic flights, costs only 0.06 US cents/km. Air Asia follows closely in second place with 0.07 ct/km for long-haul AirAsia X and 0.08ct/km for Indonesia AirAsia in 3rd place. A number of other Asian low-cost carriers (LCC) make the list, with Jetstar (Singapore) at 0.09ct/km and Lion Air (Indonesia) at 0.10ct/km.

The European LLCs that started the price war across the North Atlantic with historically low prices can also be found near the top with Primera Air (0.09ct/km) and WOW (0.10ct/km). Largest European LCC Ryan Air with only short-haul flights is in the same range at 0.10ct/km. 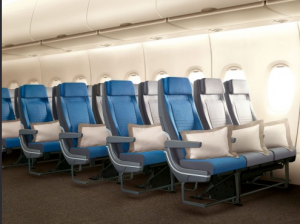 It’s surprising to see a lot of long-haul airlines considered “premium airlines” at such low prices, too: The Middle Eastern Etihad, Emirates and Qatar Airlines all have low average prices, too, of 0.10-0.11 ct/km. Even often outrageously expensive Singapore Airlines and Cathay Pacific are not far behind, although they might benefit from the exclusion of considered non-competitive fares of more than 2x. They serve some of the same routes as AirAsia, Jet Star and other LCC and many business travelers will fly them regardless of price, even if it is more than 2x!
Equally surprising to me was how expensive Lufthansa (0.22ct/km) and budget subsidiary Eurowings (0.26ct/km) are in the comparison for international flights only.

Airlines you won’t find near the top are all the US carrier – with the consolidation in the US market, domestic flights are expensive and Hawaiian is the cheapest at 0.16ct/km, followed by unsafe Allegiant at 0.20ct/km.

You can tell how fast the market is evolving from the fact that one of the airlines getting the most press for low prices, Norwegian Air, and well-known easyjet are far down the list.

If you want more details or find your favorite airline, check out the Top 50, list for only international and domestic fligths, as well as the details behind the study, at Rome2Rio.