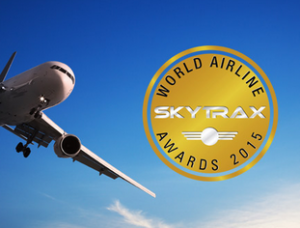 Every year SkyTrax announces the awards for the best airlines in the world, this year at the Paris Airshow. If you have followed my blog, you will be familiar with their airline quality ratings – they are one data point in my reviews of airlines. They are based on an airline satisfaction survey conducted with airline passengers around the world, also known as the “Passenger Choice Awards” and the best known ranking.

So, without much further ado, here are the top ten for 2015:

Eva and Qantas are new this year, with Lufthansa and Aseana dropping out of the top 10. But the Lufthansa Group is still doing pretty well, with Lufthansa, Austrian and Swiss following on spots 12,13 and 14 respectively. Air France (15), Thai Airways (19, one of my favorites) and British Airways (20) are also in the top 20.
The top US based carrier is, not surprisingly, Virgin America at No26, with the big three far down the list with Delta (45), United (60) and American Airlines (79). Given that the survey is based on customer satisfaction, the big three should be ashamed – they are far behind the best low-cost carrier Air Asia (25) or easyjet (39). Then again, they are probably used to it by now…

As you can see from the table, the winners have been very consistent  over the last 6 years, with Qatar, Singapore, Cathay Pacific, Emirates and Etihad in the Top 10 every single year since 2010! Not surprisingly, none of the big US carriers has made it onto the chart in that time…
And to me also not surprising, AirAsia won the low-cost carrier award for the seventh time in a row – they sure earned that. Also on that list, behind Virgin America on No2, is Norwegian Air – given their low cost fares across the Atlantic, that’s good news for travelers!

If you are a frequent traveler, you might also want to know how the big three airline alliances are doing? Over the last 6 years, StarAlliance gathered the most slots on the Top 10 chart with 27 (or average 4.5), OneWorld was second with 18 slots (or average of 3) and SkyTeam was dead last with only 3 entries on the chart. So, if you are looking for a top-quality experience from your airline alliance, you should choose StarAlliance, maybe consider OneWorld – or be prepared for a less than stellar experience on average…

Based on my personal experience, those awards do provide an important insight into the travel experience and I recommend to take them into account. Most travelers buy their tickets solely on price, yet if you are going onto that one big vacation a year, your honey moon or just one of many business trips, your experience will differ significantly based on the airline choice, so keep it in mind for your next trip!