NH hotels is the leading Spanish hotel group with almost 400 hotels in 29 countries, mostly in Europe in Latin America. I first stayed at an NH hotel in Argentina and was impressed by the style – something very much lacking in most American chains. Find out more about the brands, regions and price categories and how nh hotels compares to the other chains! 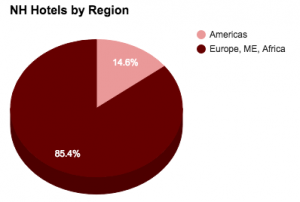 Regions: While nh hotels has expanded quickly since its start in 1988 with hotels all over Europe and Latin America. It only has a handful of hotels in North America and South Africa, with plans to open hotels in China this year. A full 86% of hotels are in Europe and 14% in the Americas. While the focus on Spanish speaking countries in the Americas and Europe is understandable, NH hotels is missing out on the growth in Asia and the potential for these stylish hotels in the region. It will be interesting to see how they do in China! 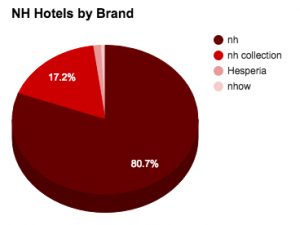 Brands: NH hotels has wisely focused on its core NH brand that makes up 80% of their hotels. They have positioned the NH Collection hotels above the regular NH hotels as “upper upscale” hotels, although I’d consider it to be flowing borders between the two brands. Nhow hotels are easier to differentiate – they are the funky design hotels in major cities. And then there are the Hesperia vacation resorts in tourist destinations. It is interesting to see that NH Hotels has kept these brands, despite growing through acquisition. While most American chains tend to keep the brands they acquire, NH Hotels is making the investment into re-branding acquired hotels, obviously trusting in the strength of their brand and keeping it simple for their loyal customers! 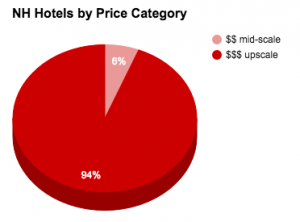 Price: All the NH brands are positioned as “upscale” hotels, although the core NH brand includes a number of 3* mid-scale hotels. NH has repositioned some of their hotels upward and closed others, to eliminate the negative impact on the brand reputation. They don’t have any public plans for the economy segment.
If you are traveling in Europe or Latin America, you are probably going to run into NH Hotels. They are one of the top hotel groups in Europe and with a much higher percentage of independent hotels there, it’s worth to get familiar with the chain prior to your next trip to Europe or Central America. If this sounds interesting to you, come back for the NH Hotels Experience and reviews of their hotels (coming soon)!