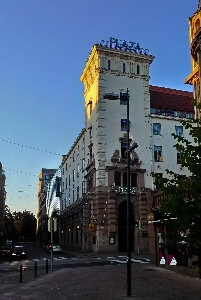 The Radisson Bu Plaza Helsinki was the second hotel of my Baltic Explorer trip and I was looking forward to staying at an upscale hotel in the center of Helsinki with all the sights in easy reach! I booked the hotel with points, using the (now expired) Bonus Award feature of the Club Carlson affiliated Club Carlson Visa Card, allowing me to splurge without the price tag!

Location: The Radisson Blu Plaza is located between the central train station and the botanic garden. While train stations in Europe often are not in the best neighborhoods, that’s not the case here: The train station square is nice and clean, the shopping district, picturesque Senate Square, the market and harbor are just steps away and the relaxing botanic garden and park is right behind the hotel. It’s a great location for visitors – easy to reach from the airport by train, easy to take public transport all over town and walk to many tourist sights, museums, restaurants and shops! Especially if you are here for a short stay, it doesn’t get much better than this! 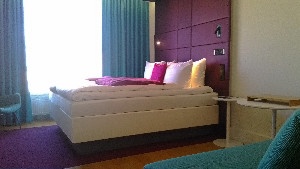 Service: The service at the Radisson Blu was surprisingly mixed for an upscale hotel: The front desk staff was professional and checked me in quickly and early without issues. They acknowledged my Club Carlson status and promised a welcome fruit plate, but there was no upgrade (which the vast majority of Carlson hotels will do). When I reached my room and got settled in, I found out that my safe deposit box wasn’t working. The front desk came to check on it, couldn’t fix it and there was no maintenance staff over the weekend. They offered to put my stuff into their safe, which isn’t really practical as I put my phone, laptop and camera in and out several times a day,  and I requested a room with a working safe. They didn’t have time to do that now, so I had to repack my luggage and have it stored to get a new room later. When I returned to the hotel late in the afternoon, there was some confusion about the room and they couldn’t find my luggage. After the initial scare, I helped them find it and made it to my room. After settling in, again, the new safe had a low battery warning! I gave up and stayed, hoping the battery would last through my stay! While the front desk handled the issue ok given their staff constraints, I’d expect housekeeping in an upscale hotel to do a better job at checking rooms before releasing them for guests. They also were running late cleaning the next day, despite having the “make up room” light turned on! 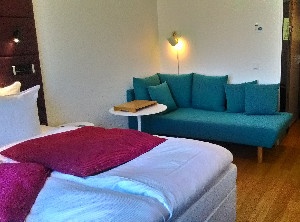 Room: My room featured a very cool design – if you are looking for a boutique’ish hotel and something different, you got it! The large. comfy bed had a purple (plum? aubergine?) pleather headboard that reched all the way to the ceiling and continued like a roof under the ceiling and down the opposing wall, with an embedded large TV. From the ceiling dangled a white, round, translucent lamp in the shape of two mushrooms. Against the wall was a sofa in a light turkoise green with lots of pillows. The closets and bar were held in white, completing the very modern look and feel. The bed had a multi-media panel built into the headboard to connect your own devices, very tech forward! The internet in the room was fast and reliable and everything in the room was working. The safe was large with a power outlet, so you could charge your devices while gone for the day! The bathroom was very small and held in modern, white and uneven tiles, with a white/black marbled counter top, a shower over a short tub separated by a curtain and the toilet. There was not much room to turn, but it was clean and in great condition. The standard amenities were provided in little bottles and the towels were of good quality.

Unfortunately, the room overall was a case of form over function: There was no desk and chair to work from, no rack for the luggage, no bathrobe and slippers and no decaf coffee – all things that the Holiday Inn across town offered at less than half the price, and I’d expect at any upscale hotel.

Amenities/Restaurant: The hotel offers a bar in the lobby, a large restaurant on the ground floor and another bar behind the restaurant. All of it was very stylish – and very empty during most of my visit. I didn’t try any of it and opted instead to try out the many restaurants within walking distance.
The hotel has two nice saunas, separated for men and women, with a changing room (lockers, but no keys, towels, no water), showers and a large dry sauna. This seems to be pretty standard in sauna-loving Finland and was comparable to the Holiday Inn I stayed before.
There is also a gym that doesn’t deserve the name: It’s a tiny room with one bike, one treadmill and one cross trainer. Fortunately, the hotel realizes this and offers keys to a nearby fitness center at no charge. I think that is a great way for hotels to handle it: Rather than investing into a mediocre gym onsite, contract a professional gym to give quests a chance to get a real workout! I wish more city hotels would do this!
Near the lobby was also a set of computers and a printer, giving me a chance to print boarding passes for my onward trip! I prefer this over emailing things to the frond desk to print – given today’s printer prices, this is another thing more hotels should do!

Conclusion: If you had enough of typical Scandinavian design, you will love the Radisson Blu Plaza with its funky design. Add the great location and you have two solid reasons to stay here.  I was a little disappointed by the service at the Radisson Blu Plaza Helsinki, felt a little bit like “we are to cool to care”. You’ll also have to take value into account: At prices in excess of $200/night or 44,000points in my case, I’d expect better, even in pricey Helsinki. If you love the room design and stay for a short time, try to find a good price. If you roll your eyes at the plum pleather, you might want to check out a few other options!