Wizz Air is a fast growing low-cost carrier (LCC) based in Budapest, Hungary, focused on connecting Eastern European cities with the rest of the region. Similar to other LCC, they connect many secondary cities non-stop, often with no direct competition, and they offer low, low prices. And you won’t be able to miss their planes in their bright pink/purple livery! Find out all about WizzAir fleet, safety and the experience to expect! 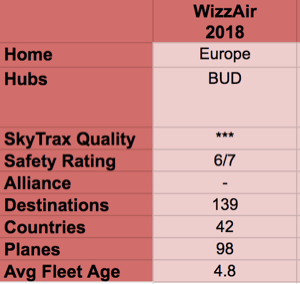 Facts & Figures: Wizz Air was launched in 2003 in Hungary, supported by American investment, and has grown to a fleet of 98 Airbus A320/321 planes with an average age of only 4.8 years, serving 139 destinations in 42 countries – that’s a pretty big network. And Wizz Air’s fleet is growing: with more than 270 on order, it has a bigger orderbook than any other European airline!
SkyTrax rates WizAir as a 3-star airline, the same as the big US airlines or many other low-cost carriers.
AirlineRatings gives WizzAir a 6/7 safety rating, deducting 1 point for Hungary’s ICAO country audit achieving only 6 out of 8 criteria – which is outside the airline’s control, but impacts their operations.

The Experience: Just like other LCC, Wizz Air relies heavily on online bookings directly with the airline. It’s a modern web site that makes booking your flight pretty easy:

Also like other LCC, the base fares are often very very cheap and you can get a ticket for less than $20 across Europe, but you’ll pay for everything else, including seat assignment, luggage, food and even printing your boarding pass at the airport or bringing your carry-on onboard. The add-on fees can quickly exceed the base fare, so you should compare to other airlines (again) after you have added everything you need – you might be cheaper off to fly a full-service airline!
I paid extra to select a seat and for Priority Boarding, which also allows you to bring one carry-on and a personal item onboard, avoiding the trip to the baggage carousel and well worth it for me!

The online check in worked without issue for me and I was able to download the boarding pass to my passport app, eliminating the need for a trip to the check-in counter.
The experience went downhill from there: While WizzAir declares a pretty good on-time record themselves, every flight from their hub Budapest at mid-day was delayed or cancelled, despite good weather. My flight was called to boarding and we were directed to a tin shed on the airfield that Wizz Air uses at their hub-airport. It’s worse than Kuala Lumpur’s old (now fortunately closed ) LCC terminal and the worst I’ve seen in a long time. 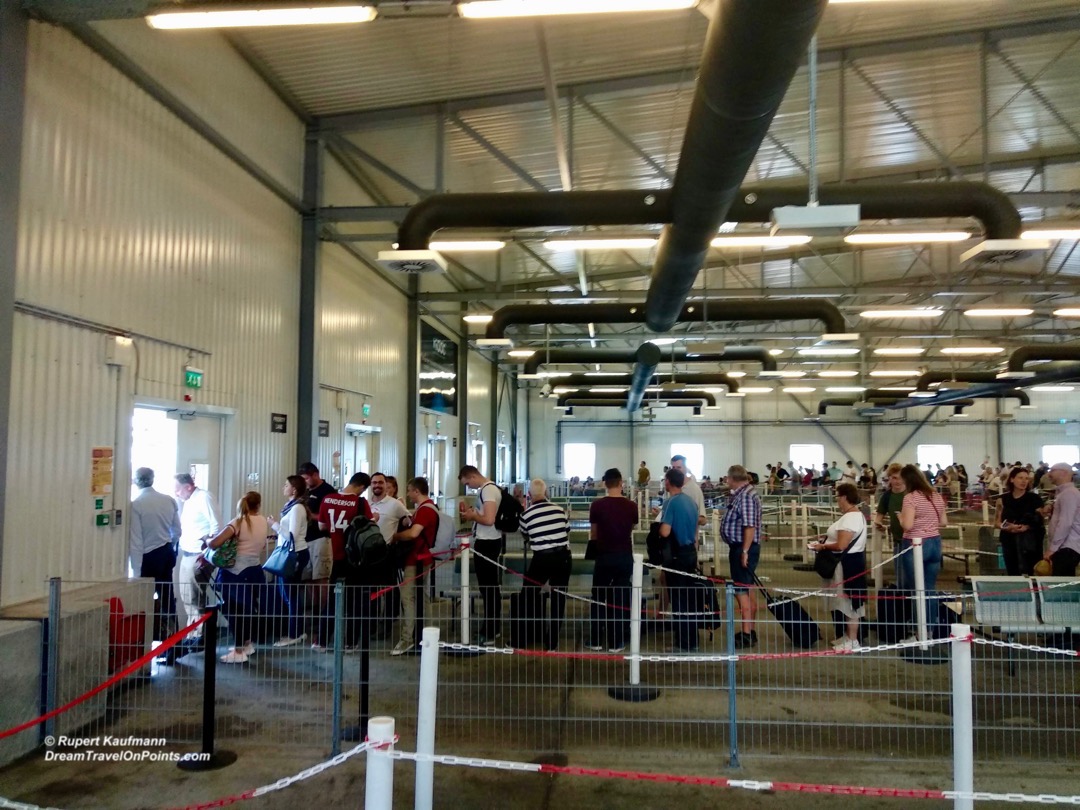 After a bit of waiting, staff told us that the flight was delayed by 30 minutes due to late arrival from Belgrade. Either staff was clueless or lying – WizzAir didn’t have any scheduled flight from Belgrade to Budapest and no flight arrived from there that afternoon. We were herded back across the airfield in the rain, up the stairs to the terminal without any further information. Sure enough, the new departure time changed every few minutes for a total of almost 2 hours. While delays happen, the poor handling by WizzAir operations and airport staff is unacceptable.

Once on board, the flight crew directed everybody to their seats, apologized for the delay and conducted the safety briefing. They were rather lax with safety regulations and allowed a child to reseat himself to the exit row. It took the flight manager on final walk-through to send him back to his seat!
The Airbus A320 has a high-density configuration with 180 seats in a 3-3 layout and a seat pitch of 30in. 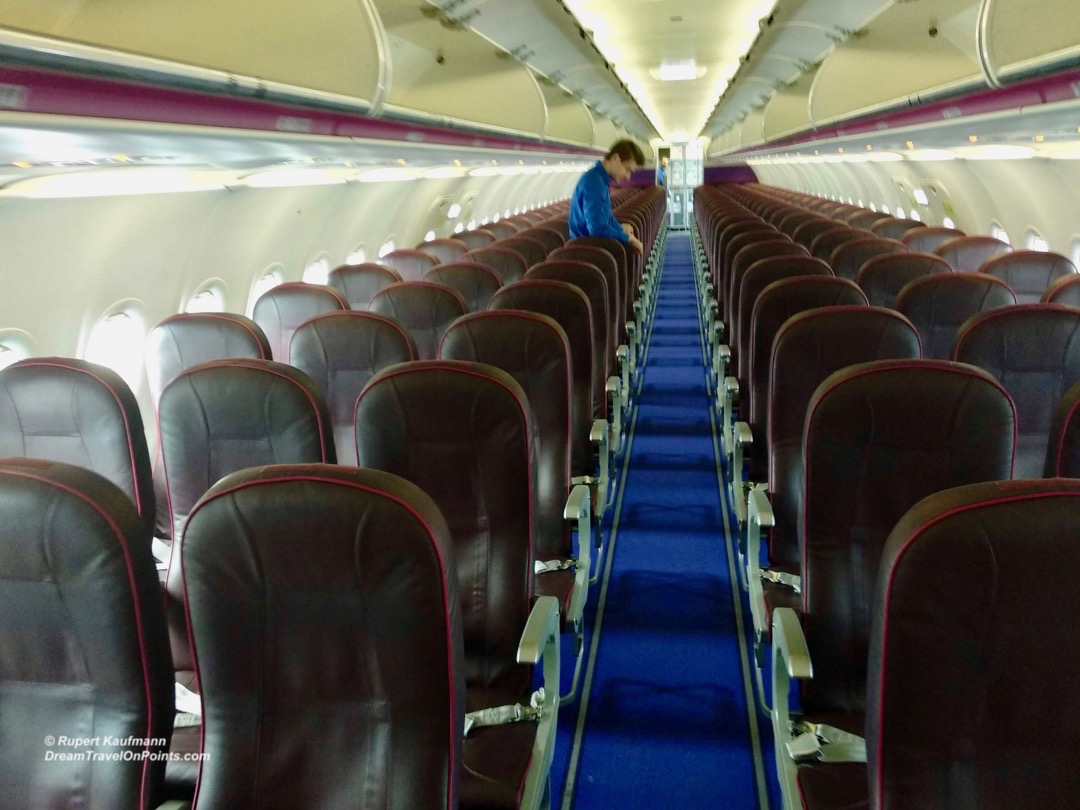 The seats are clad in dark leather and the plane was clean and in good condition, as could be expected with such a young fleet of planes. 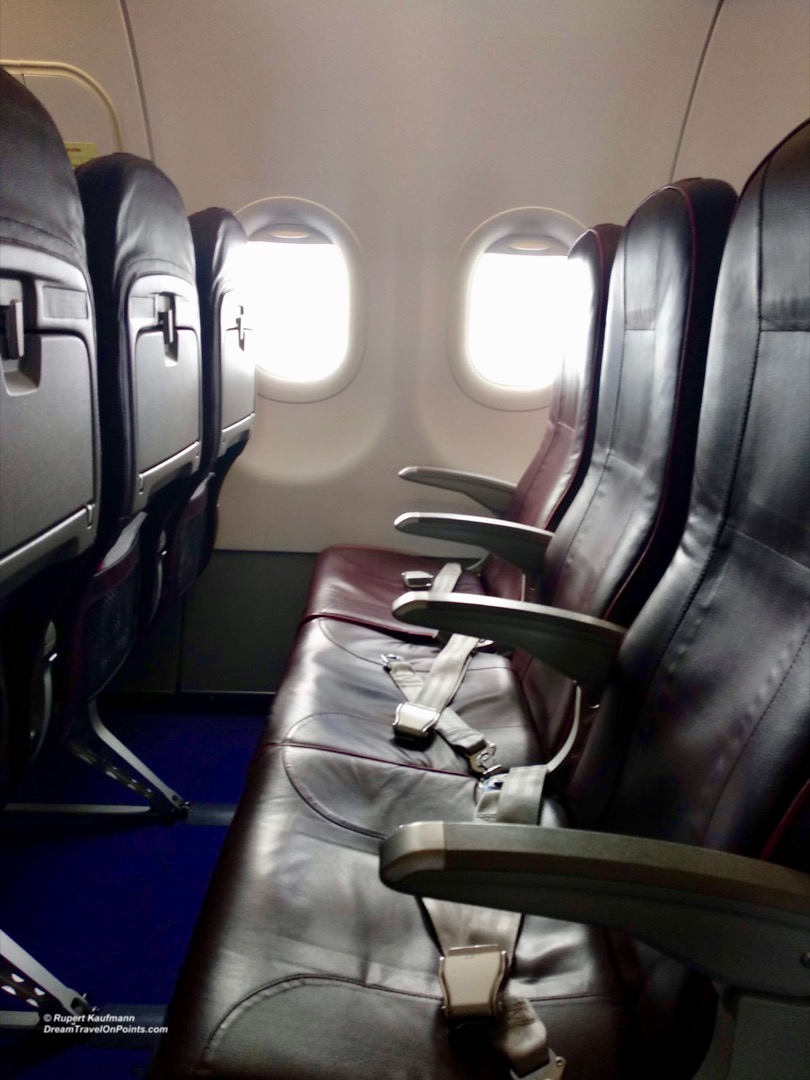 The slimline seats have minimal padding and are reasonably comfortable for my short flight of under 2h, but I wouldn’t want to be in it for much longer. For me at 1.90m/6ft3 the legroom is very tight, but acceptable for an LCC and a short flight: 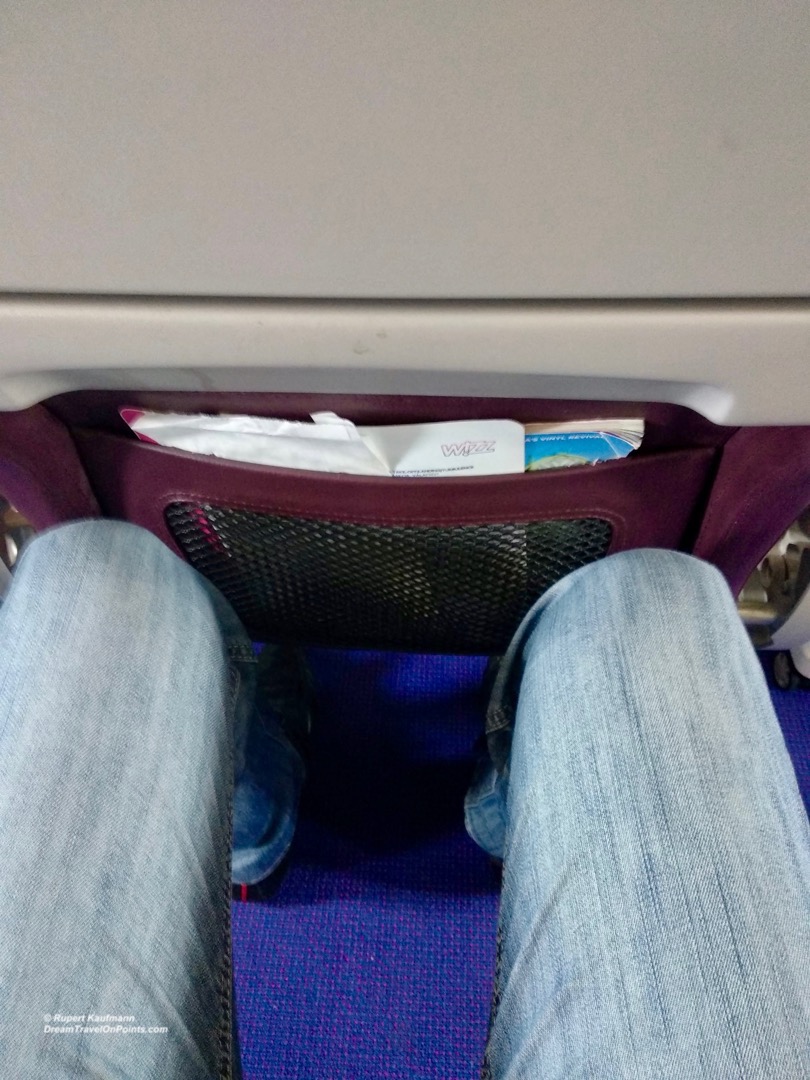 WizzAir has a long menu of drinks and snacks at very reasonable prices, with sandwiches or a glass of wine/beer for EUR4, snacks and soft drinks for less and combos at a discount.

Bottomline: WizzAir offers a lot of non-stop flights do secondary cities and to Eastern Europe at low prices, often without direct competition. Online ticket purchase and check-in are easy. You get new planes and friendly enough crews. You’ll have to deal with add-on fees for everything, so make sure that low price doesn’t become outrageously expensive by the time you are done. And be prepared for the most basic experience and worse when there are issues. It seems like WizzAir is growing too fast for its own good and operations and ground staff can’t handle it.
When faced with a choice between a much longer and more expensive connecting flight, I’d fly WizzAir again and be prepared for a poor experience. If there are other low-cost carriers, I’d rather pay a little more to fly Eurowings or Ryan Air for a slightly better experience.