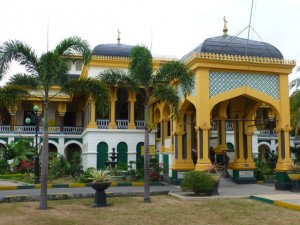 Few foreigners travel to Medan, Indonesia, and the ones who do, seem to leave quickly to see the sights of Northern Sumatra, like Lake Toba or the wildlife in the remote national parks. It even got a bad reputation among travelers for being “the worst” – but I disagree! While it is a fast growing city in a developing country with all the craziness, dust and dirt that comes with it, it has its charms and sights to spending a little extra time on your visit. 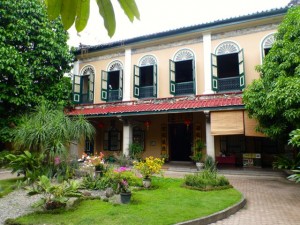 Why should I go? While Medan is not going to earn the title “dream destination” from me anytime soon, I really enjoyed my time there. There are still a few historic buildings from colonial times around the downtown area, some beautifully restored like the Bank Indonesia building, others forgotten and crumbling. It’s worth to wander and check out the architecture, although you might be the only person doing so! One of the key sights is the Tjong A Fie Mansion of a large Chinese trader, who became the first mayor of Medan and went on to build a mosque, churches and drive the early development of the city. It’s nicely kept and you get a personal tour of the building with lots of interesting information on the man, the family and the city. It’s well worth the fee of $3. 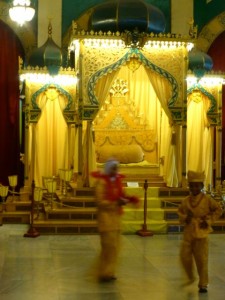 Not far from it is Istana Maimun, the palace of the sultan of Deli. It sits in a large park and is painted in bright white and yellow. It seems to be a popular attraction for locals, with a band playing music out front. A modest fee of 25 cents will get you into one big room at the entrance, with some artifacts as well as pictures of the current Sultan Mahmud Lamanjiji Perkasa Alam who inherited the role from his father at the age of 8. The main picture opportunity is the chance for the children to get dressed up in historic costumes and be photographed in front of the throne. They were a little younger than the current sultan, put on their most stoic face for the occasion and looked very cute in their outfits! Although I’m not sure they will enjoy the photo as much when their friends unearth it during their wedding in a few decades… 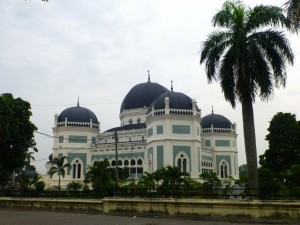 Another short walk will take you from the palace to the Great Mosque of Medan with access for the public. It was built in 1906, has an octagonal shape and is held in blue and white tones. While there is no entrance fee, you are encouraged to make a donation when you sign in. It’s an impressive building and despite having been to a few muslim countries, I never had the chance to be inside a mosque and enjoyed being able to see the inside. A local guide who attached himself to me (for a small “donation” at the end), offered some insights into the history of the mosque, some of the features and artifacts and the daily workings of the mosque. 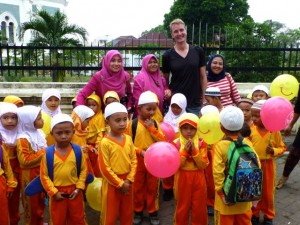 The best part of my sightseeing tour of Medan was outside the mosque though: I ran into a group of kindergardeners on a field trip. Apparently, I was a much more exciting sight than the mosque and the teacher wanted me in a photo with the kids. It took the teachers a while to get the kids ready – they had to literally turn each of them around, so that they would face the camera instead of staring at me! I was probably the tallest person they had ever seen and it was very cute! After the teachers had squeezed into the photo and all the phones and cameras had been clicked, they went on with their tour. For me, it was the highlight of the day and a big reason why I recommend exploring places off the beaten path by yourself, without a tour group. I’m pretty sure this wouldn’t happen to a bus load of tourists and the chance to meet locals, be welcomed so warmly and have a little chat can remind you of the goodness and friendliness you can find anywhere in the world, regardless of who you are,  where you are or what you believe in!

Traveltips: Medan is not the biggest airline hub out there, but it has a brand-spanking new airport with direct flights from Kuala Lumpur, Jakarta, Singapore and Bangkok, as well as other cities in Indonesia, Malaysia and as far away as Saudi Arabia! From the airport, you can take the equally new and clean train into the city. It’s much quicker and cheaper than a taxi and more comfortable than most airport trains in the US or Europe. It only runs roughly every hour, you can check out the schedule here: http://www.railink.co.id/ (it’s in Bahasa Indonesia, but Google Translate is your friend)
Around town, you can walk or take a taxi – stick with the Bluebird taxis, they are metered, have safe cars and drivers, all of which is NOT a given in Medan or anywhere else in Indonesia for that matter! You can get to most places in downtown for $2-3.
If you are planning to stay in town, there are a number of hotels in downtown, close to the sights, shopping and eating options. I stayed at the JW Marriott, considered the best hotel in town (review here). At under $100 or 10,000 Reward Points per night, it’s a great option to enjoy true luxury at a bargain price. There is also a Grand Aston, just across from the Merdeka Walk. Agoda is your best source for hotel rates in Medan!
For your shopping needs, there is a large, new mall opposite the central train station, called Center Point, with plenty of local and international stores. There are also a number of restaurants, so you might make this your evening destination for dinner as well. There is even a Gold’s Gym for a workout, available with a day-pass.
Another good option for dinner is Merdeka Walk, the central square in front of the train station. There is a row of restaurants with outdoor seating and plenty of people strolling by. I haven’t heard that many friendly “hellos” and seen that many smiles in a long time, giving you another indication that the best thing Medan has to offer are its friendly people, so make it a point to get out into town!