Turkish Airlines is the flag carrier of Turkey and serves destinations in more countries than any other airline. They received the “Best European Airline” award several years in a row and are a StarAlliance member, making me curious to try them out. Find out who they are and why you should care! 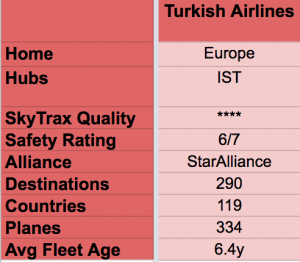 Who are they? Turkish Airlines (TK) is based in Istanbul and is serving more destinations from their hub than any other European Airline, a total of 290, in 119 countries (more than any airline worldwide). Similar to the Middle Eastern airlines, Istanbul has a strategic location, making it possible to reach destinations in Europe, Asia, Africa and the Americas non-stop! Turkish Airlines is using a fleet of 334 planes, with a mix of Airbus and Boeing narrow- and wide-body planes!
Turkish Airlines is a full-service carrier, but only offers Business and Economy class cabins. They don’t offer a First Class cabin and, after being one of the first airlines to offer a Premium Economy class, discontinued that at a time other airlines are launching it! The business class offering varies greatly between short-haul and long-haul routes, similar to most other airlines.
SkyTrax rates TK as a 4 (out of 5) star carrier, similar to Lufthansa, behind Singapore Airlines or ANA, but ahead of United Airlines. They were ranked number 12 in the 2017 SkyTrax Awards, a steep drop from rank 7 in 2016!
AirlineRatings gives them a 6-out-of-7 safety rating, with 1 star removed for a fatal crash in 2009.

Why should I care? Turkish Airline’s hub in Istanbul makes them a great choice for flights between Asia and Europe or the East Coast of North America, allowing a one-stop journey between many city-pairs for a convenient trip. With the largest number of countries served of any airline, they will get you to many places especially in the Middle East, Asia and Africa that other major airlines don’t go.
Turkish Airlines has earned a number of awards in addition to their 4 star rating and 12th rank among global airlines. Strong contributors to their ratings are the quality of the food served onboard – in business class by a chef! – as well as the humongous lounge in Istanbul! So, if food onboard is important to you or a pleasant ground experience on your stop-over, you should give TK a chance.

What else should I know? Turkish Airlines is a member of StarAlliance, making them a great choice to earn or redeem miles in United’s MileagePlus program or other StarAlliance carriers. Their own rewards program, Miles & Smiles, also has some unique rules worth checking out.
Due to the security situation in Turkey and the Middle East, TK’s growth has slowed and they have faced increased scrutiny. While I was concerned prior to my trip through Istanbul, I felt safe onboard as well as at the airport, and wouldn’t have any issues flying with them again.