Radisson Hotel Group (formerly known as Carlson Hotels) is one of the smaller hotel groups with just under 1,200 hotels worldwide. They are also one of the more difficult to track due to their complex ownership structure. With Carlson Hotels responsible for the Americas business and Carlson Rezidor for Europe, the Middle East and Africa, they have operated like two separate companies with different brands in the different regions. With the acquisition of both by Chinese group HNA, a global steering committee has been established and the Radisson Hotel Group as umbrella for both has been launched. I have put together the Radisson Hotel Group (RHG) facts & figures based on their web site and investor relations information as of March 2018! 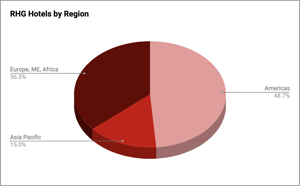 Regions: Radisson Hotel Group is one of the more balanced, global hotel chains. The US is the largest region with 49% of their properties, followed by Europe, the Middle East and Africa with 36% and Asia-Pacific with 15% of hotels. RHG has been growing quickly in Asia, more than doubling their properties in 2019! Within the regions, there is a heavy focus within the Americas on the US, and within Asia, on China and India, which makes their actual global footprint a little smaller than it sounds by the numbers!

Brands: RHG is the result of mergers & acquisitions and has been run as two separate business for years. They have started to bring the brands together and make them available worldwide. They have done what I’d consider the best job in explaining what role the different brands play in their portfolio with this “Brand Architecture”: 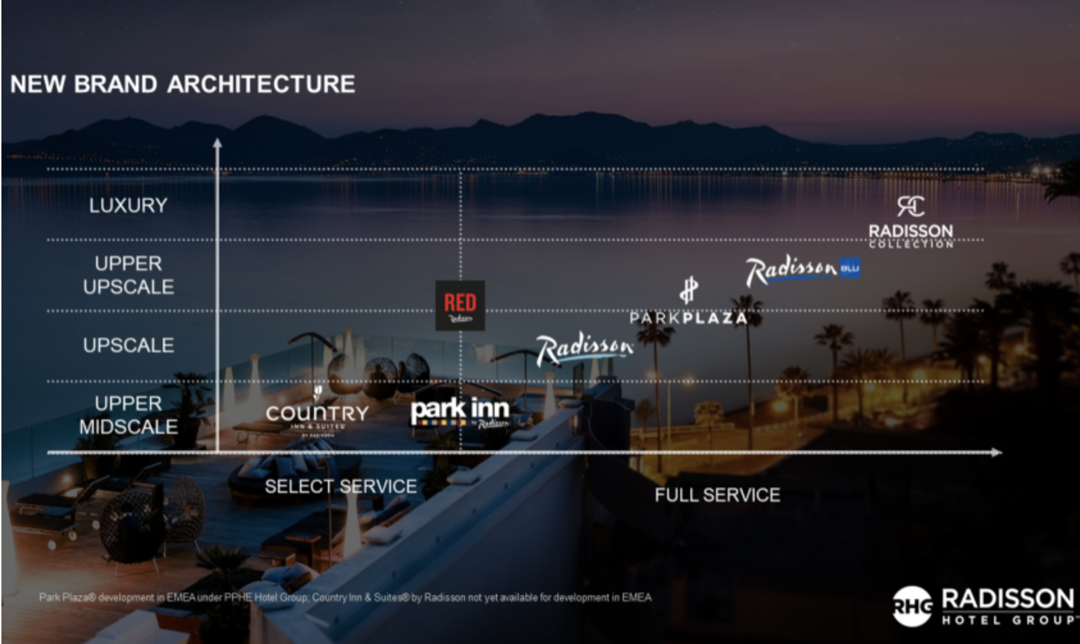 The just recently launched Radisson Collection sits at the top, with only 17 properties in Europe so far. Radisson Blu is an upper upscale brand with 28% of their properties, mostly in Europe but expanding to the US and Asia. Just positioned below is Park Plaza, 42 hotels, also mostly found 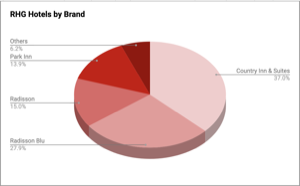 in Europe.The mid-scale Radisson brand (15%) is mostly found in the US, where they have lost a number of hotels, and in India, but they are now expanding into Europe. All of these brands are full service hotels, so you can expect restaurants, pools or gyms.
The Radisson Red brand is relatively new, and the most trendy brand targeting younger travelers. Despite the short time in the market, there are 31 properties around the world and more under development. They are fairly upscale, but select service, going with the trend.
Country Inn & Suites by Radisson is the largest brand with 37% of all properties. They are a mid-scale, select-service brand that is focused on secondary markets in the US with a handful of properties in India. The mid-scale Park Inn brand (14%) is mostly found in Europe and offers some select-service and some full-service hotels – think of them as the stylish sibling of the Country Inn! 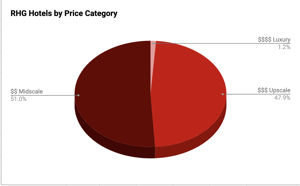 The Radisson Hotel Group has announced some significant changes and it shows in the numbers – they are rationalizing their portfolio, repositioning or rebranding properties and aggressively adding new hotels, especially in Asia. I consider these positive changes for travelers (as well as for shareholders)!