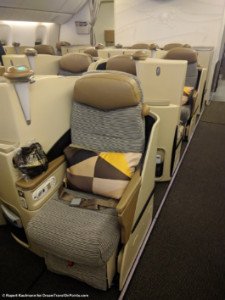 Etihad was only launched in 2003 and in a short time grew to offer flights around the world, become a 5-star airline and gain a lot of fans for its premium cabins. I finally had my first flight in Etiahd Business Class and was duly impressed by the great seats, service, food and entertainment. The lounge and ground service in Abu Dhabi were equally impressive. Find out the details and how Etihad compares to other premium airlines.

Pre-Departure: Eithad recently changed the baggage allowance. On flights from the Philippines, Etihad allows 40kg in Business class, the same as Economy class – not very generous but sufficient for me. To the US, the allowance is a little more generous at 2 pieces of 32kg (vs 2 x 23kg in Economy). Elite members in their Etihad Guest loyalty program have an extra 10-20kg allowance, depending on the level. You can bring an additional two pieces of hand luggage on-board, with a weight of up to 12kg total, as well as a folding garment bag and a small, personal items. That’s a generous allowance for carry-on and more I’d want to drag on-board!

At the airport, Etihad offers a separate line for Business Class and during my check-in in Manla there was no wait. Staff was friendly and professional and invited me to the contract lounge. None of the contract lounges in Manila’s Terminal 1 are great, but that’s not Etihad’s fault!
The Boarding Experience was good in Manila: Business Class was allowed to board early and the process was well organized.

Onboard Service: Service was warm and friendly from the start. Cabin staff greeted passengers at the door and guided everybody to their seats. The flight attendant responsible for my part of the cabin introduced herself. Staff was attentive throughout the flight, although not quite as precise in execution and ever-present as on Singapore Airline and neither as warm. I’d consider them a step below Singapore Airlines, but on par with Oman Air or ANA.

Food: On my flight from Manila to Abu Dhabi of about 9h, departing after midnight, a selection of snacks was offered throughout the flight and a full breakfast was served prior to arrival. 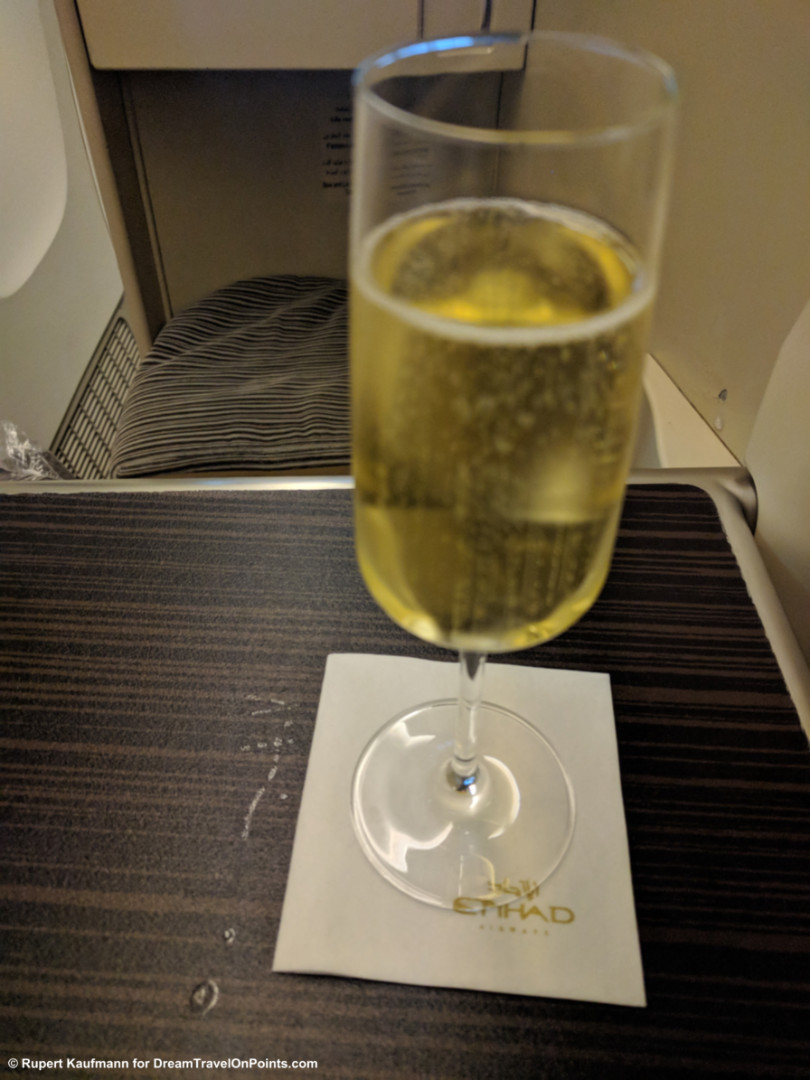 I had the welcome champagne (of course), skipped the snacks and went straight to sleep, but got up in time for the breakfast. 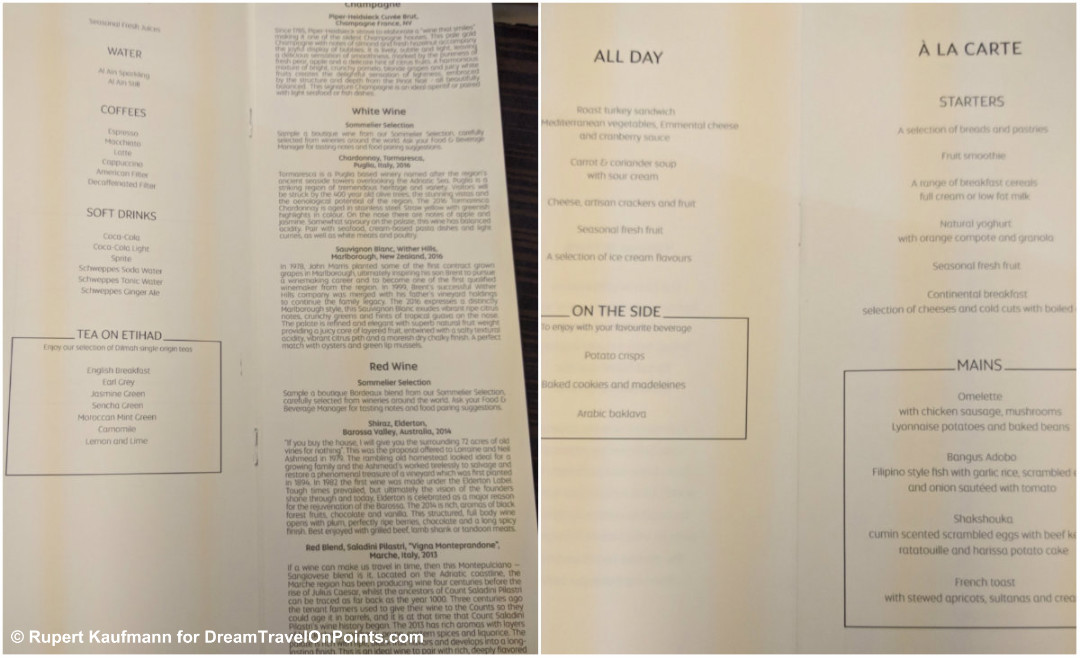 The menu suggested a selection of starters and a choice of main courses. I selected the fresh fruit, a pastry and an omelette. The breakfast was served on a nice tray with porcelain dishes and glassware. The omelette with sausage, potatoes and mushrooms was ok (granted, it’s hard to serve good eggs on a plane) – a good portion with average taste. After having read great reviews about Etihad food, I was a little disappointed. I’d call it average for Business Class and a step below the best in the industry, for example on Turkish Airlines or their Arab neighbor, Oman Air. 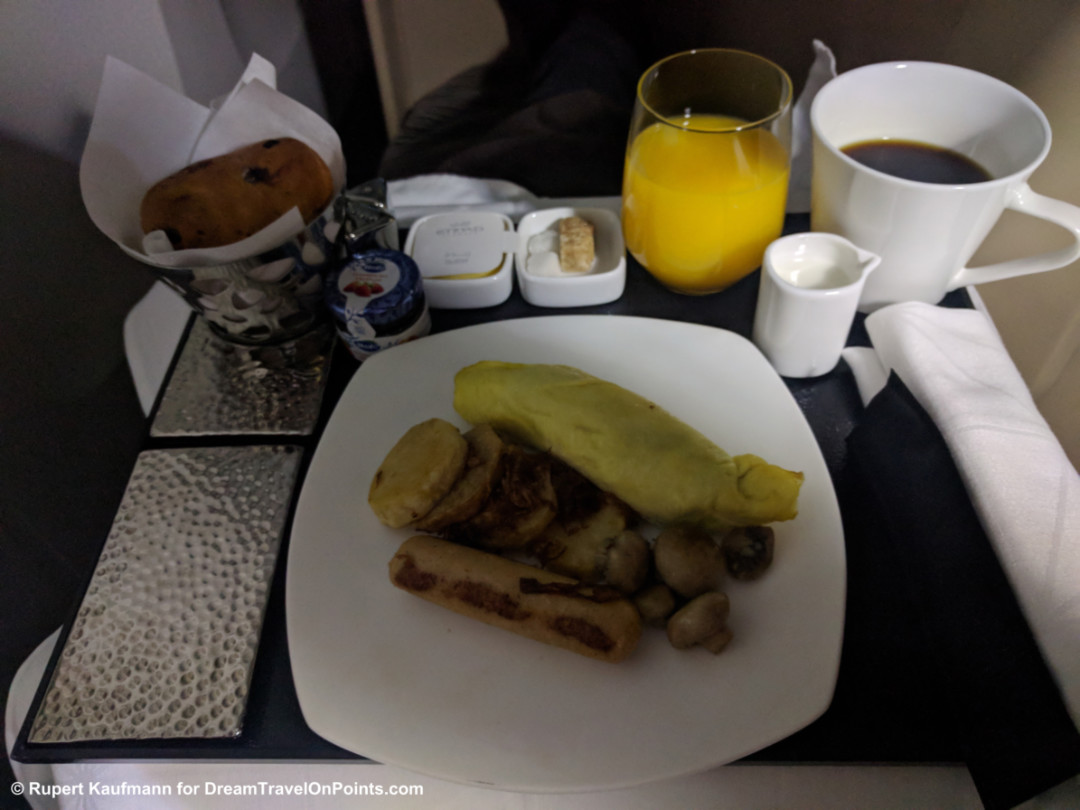 Seat Boeing B777: The cabin is held in beige/brown tones, which is inoffensive, if a little drab. Etihad has a staggered 1-2-1 layout. All seats face forward, are fully flat and have direct aisle access, similar to ANA, Asiana or Oman Air. I had a window seat (7A) and they offer the best privace being isolated from the aisle. The middle-middle seats are close together, earning the nickname honeymoon seats. All aisle seats have relatively less privacy. 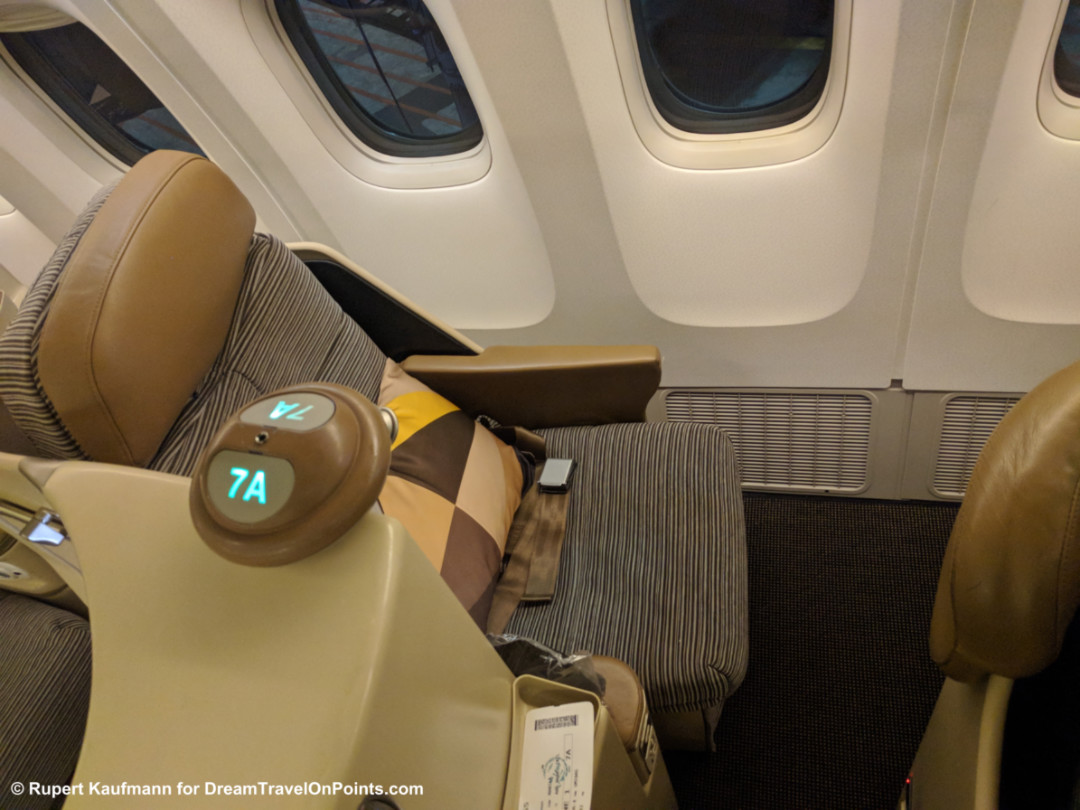 The seats can recline gradually from an upright position to work or eat, to a lounging position to watch TV or relax to a fully-flat sleeping position. I found the seat to be comfortable in each position. The seats don’t feel quite as spacious as the similar ones on Oman Air and have less well organized storage. There is a traditional remote control next to the seat as well as a USB outlet and headset plugs. The provided headsets were good. Each seat also received a small pillow and a cushy comforter to help with a good nights rest! 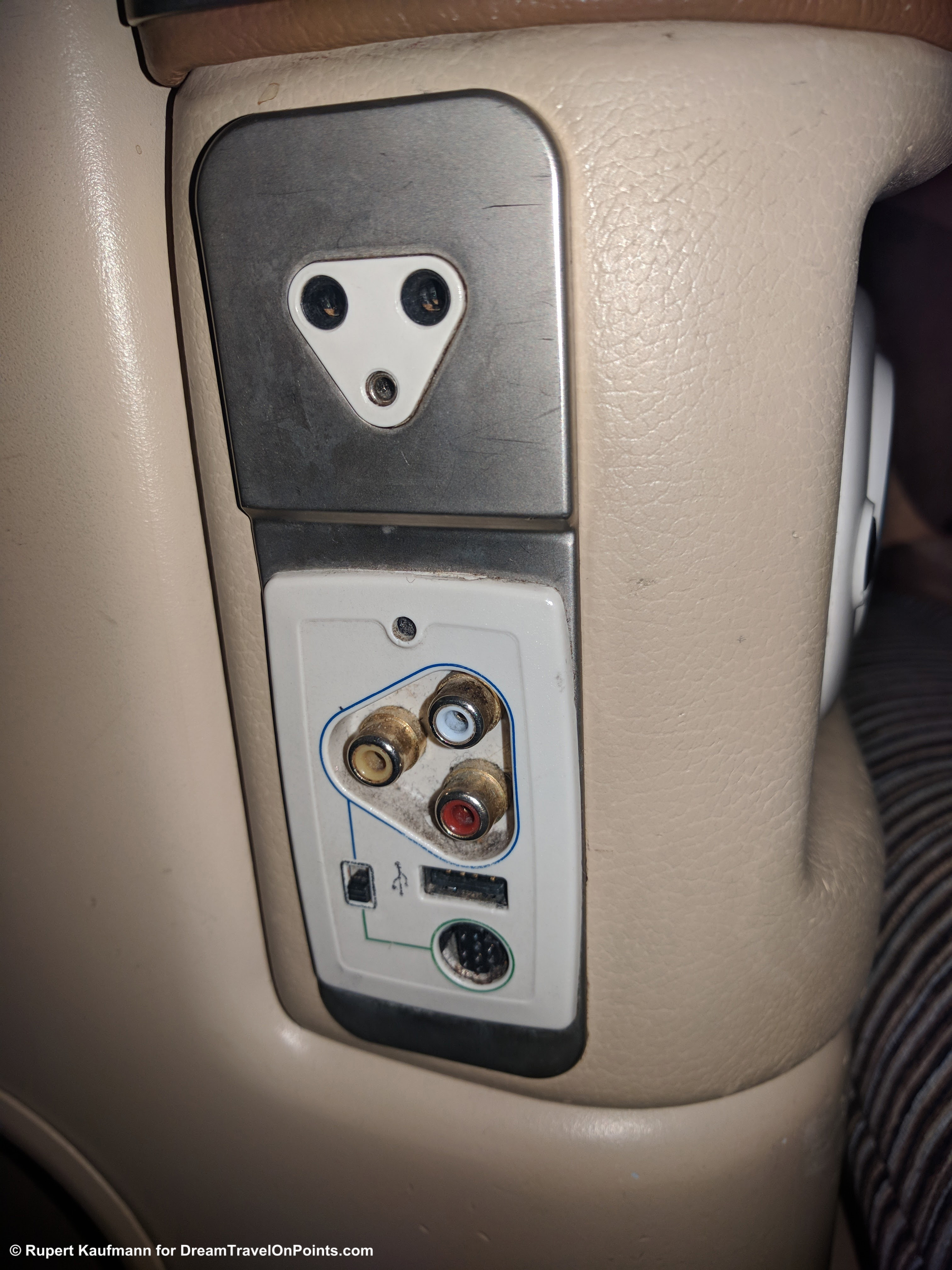 Entertainment: The Etihad ebox entertainment system is a standout feature of Etihad flights with a vast selectino of movies, TV and music. Where other airlines offer a handful of movies and a few episodes of popular TV shows, Etihad has a seemingly endless selection of movies, including recent Hollywood blockbusters, as well as whole seasons of top TV shows – a great chance to catch up on episodes you have missed. The screen is bright, clear and of high contrast. I was soundly asleep for most of the flight and didn’t get to see as much as I would have liked to! 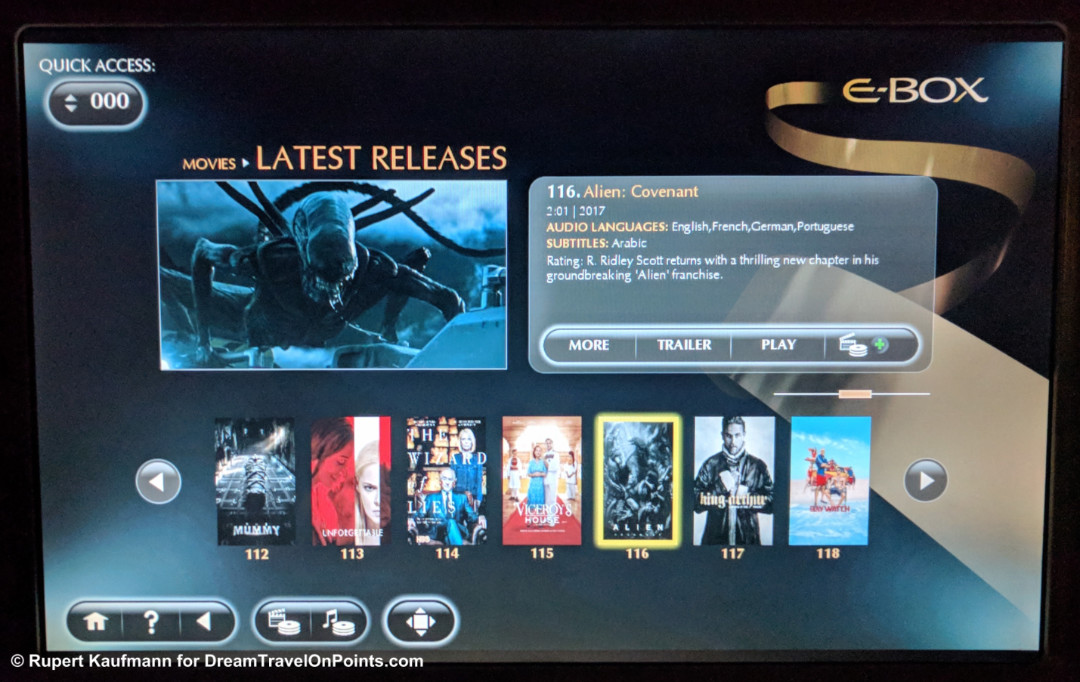 Ground Service: At Abu Dhabi, Etihad’s hub, they offer an arrival lounge for business class travelers. I arrived very early and took a shower at the lounge prior to heading to my hotel for a very early check-in. You can read my review of the lounge here!
Etihad was still offering a chauffeur service in Abu Dhabi at the time. It is very convenient and well organized. The service spot is easily found, staff has your limo reservation and guided me to my car without any wait. That sounds a lot more luxurious and special than it is though – transport was in a basic mini van, the same as the local taxis. It is a nice touch, but “limousine” and “chauffeur” are a little overstating the offering.

Bottomline: Etihad Airways certainly earns their 5-star ranking with their business class offering: The 1-2-1 layout with fully flat, forward facing seats is my favorite, the entertainment system is top notch and food and service were very good, making Etihad’s Business Class one of the best products in the sky. Yet after all the hype about Etihad, I was a little disappointed – it’s not the runaway best airline Etihad is often described as: Singapore Airlines has better service, Turkish Airlines has better food and Oman Air has better seats. And with the difficult financial situation and ongoing service cuts, it’s not likely to get better. I enjoyed my Etihad Business Class experience, I’d happily fly again and recommend them. I do suggest to compare fares – other regional airlines like Oman Air or Turkish Air offer comparable products at much lower prices!