As enticing as the adds of the hotel and airline companies sound, often the number of flights or nights and the amount of money you need to spend, to actually get enough points for a free night or flight is staggering. But you can do it, as yesterdays post showed (insert link here), and get status and points much easier than it sounds, if you are ready to hunt for some promotions.

One of my favorite programs (and least loved by other bloggers), Intercontinental Hotel Group’s Rewards Club, has one of the most controversial love-hate promotions. IHG ran two “The Big Win” promtions, followed by the current “Into the Nights” promotion. Both are “custom tailored” to each member, which basically means that if you staid a lot in the past, you have a huge target to achieve and if you haven’t staid much with IHG, your target is much lower.

After staying a lot with IHG on business for a while, my two Big Win promotions required such a huge number of nights that I deemed the goal unachievable and stopped staying at IHG alltogether! Long and behold, the promotion targets kept dropping and with the most recent “Into the Nights” promotion, my personal target was achievable and very attractive. I would get two free nights at any IHG property (including my favorite, Intercontinental Bora Bora, see review here) for hitting the following targets 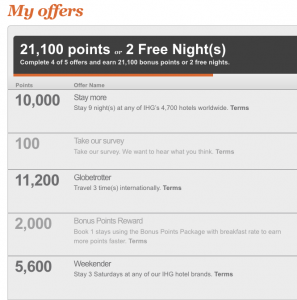 The key in achieving this kind of promotion is to combine the different targets, for example I can book a 2,000 points package for a Saturday stay in a foreign country and score on four different targets. In an ideal world, I could earn two free nights by staying at three hotels, in three countries, including one bonus package rate and fill out the survey.

I am working around my current travel plans to earn the two free nights as cheaply as possible and I’m willing to even make 1-2 “mattress runs” (checking into a hotel that I don’t really need to be at) to make it work! I AM a little nervous about IHG’s track record with this promotion – they have already changed the terms after it was released and news from other bloggers is filtering out that some “terms & conditions” are being applied that are unpublished.

I will post about some of the stays as well as the results from the promotion later, keep your fingers crossed!