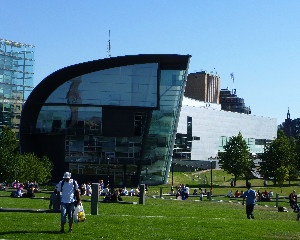 I enjoy visiting museums when traveling – they tell a lot about the place you are visiting, not only by the exhibits but by the way the stories are told! Helsinki was the first stop on my Baltic Explorer trip, I had four days to explore and the city has has a lot of museums to offer – so which ones are worth visiting?

I purchased the Helsinki pass for three days that gives you free access to 24 museums! That’s a lot, even for a museum fan like me. I did manage to see a few and the following overview will give you an idea, if it is worth visiting for you:

Ateneum: The Ateneum is the Finish National Galery, exhibiting fine art with a special Finish and Nordic twist: There are works of a number of Scandinavian artists, including Edvard Munch, Hugo Simberg and Theodor Kittelsen. Most interesting to me and unique to the Ateneum were a number of themed rooms, exploring national mythologies and folk traditions, as well as nordic landscapes. I’d rate this museum “for art lovers”… It’s across from the central train station and the entrance fee is EUR12.

Kiasma: The Kiasma (EUR12) is housed in a stunning building next to the train station and exhibits modern art. It organizes changing exhibits and during my visit featured photography from Robert Mapplethorpe, with works from the 70s and 80s in New York, some quite explicit, as well as the exhibit “Face to Face” with portraits from various artists. I’d consider the Kiasma more accessible. Between the exhibits, the great architecture inside and out, the cafe and the relaxed garden outside, it’s worth a visit! 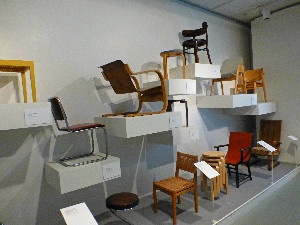 Design Museum: I enjoy Scandinavian design, especially for furniture, and that put the Design Museum on my list. It’s a small museum a little South of the center and it had three exhibits during my visit. My favorite was called “Finish Form”  and featured applied art and design in Finland from the late 19th century to today. It put the works, from household items to furniture and technology, into the historic context of their time, providing a good understanding of the design of the different periods. There were also a Finnish Fashion exhibit (which I thought was ok) and a temporary exhibit of the work of contemporary Chinese designers. Considering the small exhibit, the fee of EUR10 seemed a little steep and I’d recommend this to “design lovers”… 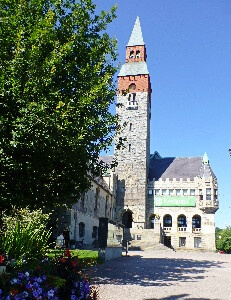 National Museum: One of my favorite types of museum is history museums. You not only get to learn about the history of the country you are visiting, but also how the people see themselves. It’s interesting to note how two countries who might have been on opposing sides of a war describe the same events… The Finnish National Museum holds a ton of information and presents it very well. It gives an overview of the land and the people from prehistoric times to the present. The permanent exhibit shows pottery and arms from the early ages, religious art from the middle ages and traces the development from the middle ages through renaissance and Swedish rule to Russian rule and independence. By showcasing the life of the people it provides more relatable information about Finish history – from the nobility and clergy to the craftsmen and peasants. The exhibit “The Land and its people” covers  Finnish culture, from “houses without chimneys” to folk costumes and wood carving and insights into the Sami people. It’s pretty heavy on information and was the museum I spent the most time in. If that sounds like too much, I’d recommend to skip past the early exhibits and focus on the Swedish and Russian realm and “The Land and its people” to get the most insight specific to Finnish history! The museum is a short walk from the central train station and well worth the EUR9 entrance fee!

You probably have to be a history buff to appreciate the last two museums on my list:

The Military Museum chronicles the history of the Finnish wars, from Swedish and Russian rule through the Civil War to the Winter War and World War II. It continues with coverage of peacekeeping missions in the modern times. The exhibit provides mostly historic background as well as some uniforms, medals and some weapons from the different periods. The focus is more on the history though: The 20th century wars are very difficult topics to address in Europe and the museum is doing a good job at laying it out. For me, especially the transition from Russian rule to the civil war and the wars against Russia, was presented well. The Military Museum is about a 20 minute walk from the harbor and charges a EUR5 fee. If you are visiting Suomenlinna, you can visit the military museum there with a very similar exhibit!

The Mannerheim Museum is set up in the former private residence of the military leader during the civil war and later president of Finland. The exhibit shows the residence with original furniture, uniforms, medals and weapons of Mannerheim. The entrance includes a private tour that provides insight into Mannerheim’s role in Finnish history. It’s helpful to have a prior understanding of the history to put the exhibit into perspective. WIth the very personal and narrow focus, most people will probably skip this museum and I can understand that…