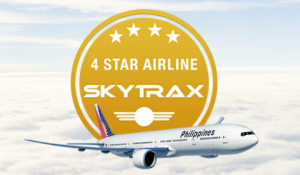 The Philippine flag carrier, Philippine Airlines, has been certified as a 4-star airline, passing 3-star airlines like United or Delta and joining 40 other premium airlines with this ranking, like Thai Airways or China Airlines. In 2016 set out the ambitious target to become a 5-star airline and while they have not achieved that goal yet, the 4-star rating is an important step towards that goal.

SkyTrax awarded an additional star after working closely with Philippine Airlines and conducting an audit. The 4-star rating recognizes the improvements to the fleet, including the introduction of new Business Class and Premium Economy cabins on their new and renovated Airbus A330 and Boeing B777. Philippine Airlines also invested in improved service with the tag line “Heart of the Filipino”, highlighting the friendly service the country is known for. SkyTrax also noted that it is looking for consistency, with an eye on the ordered, yet-to-be-delivered Airbus A350, and further service improvements.

My Take: The new Business, Premium Economy and Economy cabins on the A330 are a big step forward for Philippine Airlines, offering the best hard product in each cabin in Asia – even 5-star airlines, ANA and Singapore Airlines still fly recliner seats in Business Class or angled seats on regional flights! PAL has also made improvements to onboard food and drink service. Even in Economy class, PAL offers food and drink to all passengers and it’s a lot better than what 5-star airline Cathay Pacific dishes out! I also noted an improvement in the quality of business class food and the selection of wine and champagne! 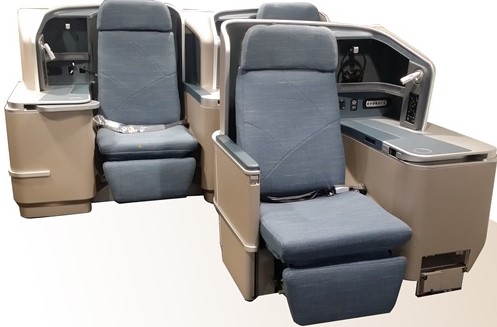 Philippine Airlines has also made improvements to the ground experience at their Manila hub in Terminal 2. While it can’t rival Singapore’s Changi airport, transfer have been eased, the terminal renovated and ground transportation options improved.

But the expected consistency is still a long way off – only a handful of planes have the new cabins and you can still end up with a much inferior product in case of equipment changes. That happened to me on a recent trip where I was planning to review the new Premium Economy class, but after equipment change was downgraded to Economy! I had to fight for a refund or upgrade to Business Class, something most travelers might not know or be willing to do. And the long-haul flights to the US and Europe are still served by Boeing B777 with a non-competitive 2-3-2 Business Class.

Similar to the credit for planned new planes, SkyTrax gave credit for the planned Mabuhay Miles lounge improvements. While the current lounge is nice enough, I wouldn’t call it 4-star by a long shot and look forward to the upcoming enhancements.

Bottomline: Philippine Airlines has invested into the fleet and service and the 4-star rating is the reward. I have personally noticed the improvements in some areas and congratulate the flag carrier to this achievement. But I am still waiting for the consistency SkyTrax noticed in the fleet. And without significant improvements to ground and call center service, the desired 5-star rating is still some way off.