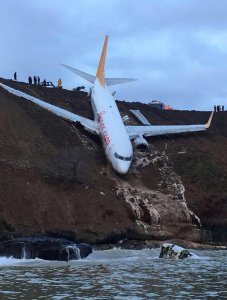 A Pegasus Airlines Boeing B737 skidded of the runway at Trabzon Airport in Northern turkey on landing and went over the cliffs edge, nose forward towards the ocean. Luckily, the plane’s landing gear got stuck in the mud before the plane plunged into the ocean. It’s a miracle that all 162 passengers and 6 crew members were able to escape the doomed plane unharmed!

The Pegasus flight was on its way from Ankara, the Turkish capital, to Trabzon, and started the landing as planned on the wet runway. Apparently, the plane struggled to slow down and turned left when the engine unintentionally accelerated, plunging the plane over the cliff. The plane got stuck in the mud just meters from the water. Understandably, with the nose pointing into the ocean and the tail in the air, panic ensued on the plane as passengers tried to escape to safety. You can see how perilous the situation of the plane is in this video:

It’s nothing short of a miracle that the passengers and crew were all able to evacuate without injury. I’d give credit to the crew to facilitate that! The following video was taken onboard the plane during evacuation – taking a video of what’s going on wouldn’t be the first thing on my mind in this situation, but it gives you an idea of what’s going on!

The plane is now anchored by steel cables to avoid it plunging into the sea. An investigation is ongoing what caused the incident. It’s too early to tell whether this was weather related, pilot error or a technical issue and I’ll follow the story when the final report is issued, probably many months from now!

I was scheduled to fly with Pegasus Airlines from Abu Dhabi to Germany when Air Berlin went bankrupt and cancelled my flight. I changed last minute to a flight with Etihad and I’m glad I did.
If you’d like to get more travel related news like this from around the world, please follow me on Twitter – I’m posting news daily, so you can stay up to date on the world of travel with my Twitter updates! Or, for a weekly update, sign up for my newsletter for a Sunday Summary!