China Airlines is the largest airline and the flag-carrier of Taiwan, not to be confused with Air China, the flag-carrier of mainland China. Even though they fly to Europe, the Americas and all over Asia, and are a member of the SkyTeam alliance, they are not very well known. Read on to find out more about them! 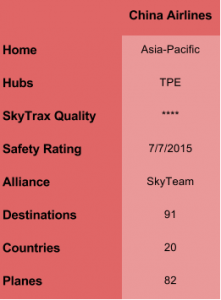 China Airlines – who are they? China Airlines (airline code CI) is based out of Taipei’s Taoyuan International Airport (TPE). They serve 91 destinations around the world, with most of them in Asia and some flights to the Middle-East, Africa, Europe and the Americas. The political situation, due to China’s demand for a one-China policy, they can’t operate to all the countries they’d like. They operate a fleet of 82 planes, with a mix of Airbus and Boeing and narrow-body and wide-body planes.

Skytrax rates China Airlines a 4* (out of 5) airline, putting them ahead of any of the US network carriers (read more here). Airline Ratings give them a 7 (out of 7) safety rating, so you can feel safe flying with them (read more here).

China Airlines has a frequent flyer program, Dynasty Flyer (Dynasty is their call sign) and they are a member of the SkyTeam alliance, giving you lots of options to earn and redeem miles!

Why should I care? China Airlines is not a well-known carrier and is often confused with mainland China carriers. Their international fares for both Economy and Business class are often significantly lower than competing network carriers, so you can find a good bargain with them. Their hub location allows them to fly non-stop to the US and Europe, making them a good option for a lot of Asian destinations.

As a member of the SkyTeam alliance, you can also use points with them, for example Delta, KLM or Air France! Their availability is pretty good, so you might be able to score a free ticket in a premium class with them!

What else do I need to know? China Airlines launched a “NexGen” overhaul program in 2014, rolling out new planes and onboard programs. During that exercise, you will experience some of the old and new planes. Their new Boeing 777-300ER have their new business class product, but no more first class. I recommend to check what you are flying before you book – your experience can vary greatly!

China Airlines operates their own lounges at 8 airports, so you might be using a SkyTeam lounge at some airports. They have an English language website, so you find more information about them here.