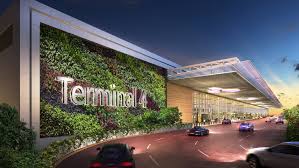 Singapore’s Changi Airport has been rated the world’s best airport year after year and is determined to stay on top. It recently unveiled the new Terminal 4, the most modern terminal on the planet, designed to enable a fully automatic, self-service for passengers. I had a chance to fly out of Terminal 4, so follow me along through the stunning SIN Terminal 4 in ten photos!

The green wall welcomes you to Terminal 4 – a feature common at Singapore buildings and a nice, green touch. Once you enter the terminal through the glass front, you’ll know that there is nothing budget about this replacement for the former budget-terminal: The high ceilings with metal slats, swooping light fixtures and lots of natural light make the departure hall feel airy. 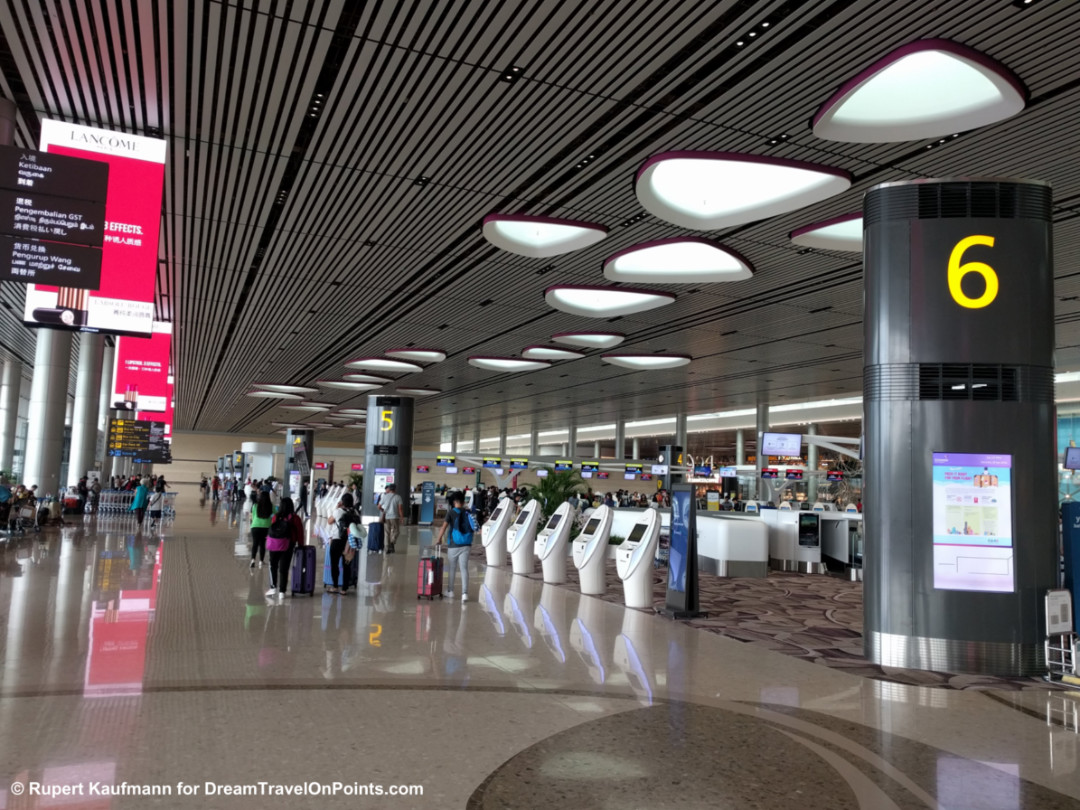 The first high-tech feature of the terminal you’ll see are the self check-in terminals in front of the desks. They are meant to be the primary means of checking in and not only issue your boarding pass, but can print your luggage tags and scan your boarding pass! Unfortunately, many regional low-cost carriers insist on a document check here (instead of at the boarding gates), so I had to get in line despite having only carry-on.
The luggage terminals are designed to facilitate self service as well, but they seemed to have some teething problems. During my check-in, the luggage belts were backed up and check in was stopped. I was allowed to cut in front of the line for my document check. All luggage terminals I saw were still manned, it might be too early for self-checked luggage to be available! 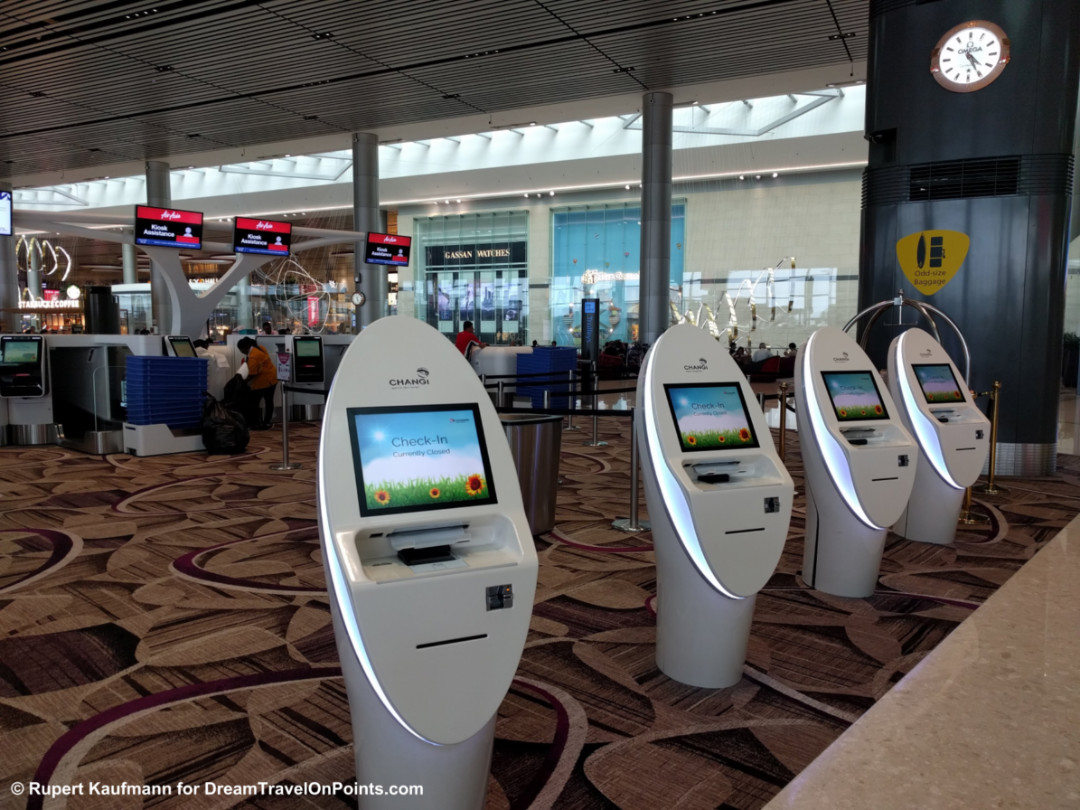 Your next stop is immigration. All Changi Terminals have automated gates for Singaporeans, residents and trusted travelers. A little known fact is that ALL travelers, even non-residents, can use the automated gates at departure from Singapore, if your finger prints were taken at entry to the country, which is standard at the airport and even land crossings. With most travelers able to use the automated gates now on exit, there seem to be a lot more of them than at the older terminals and I’ve never seen a wait. 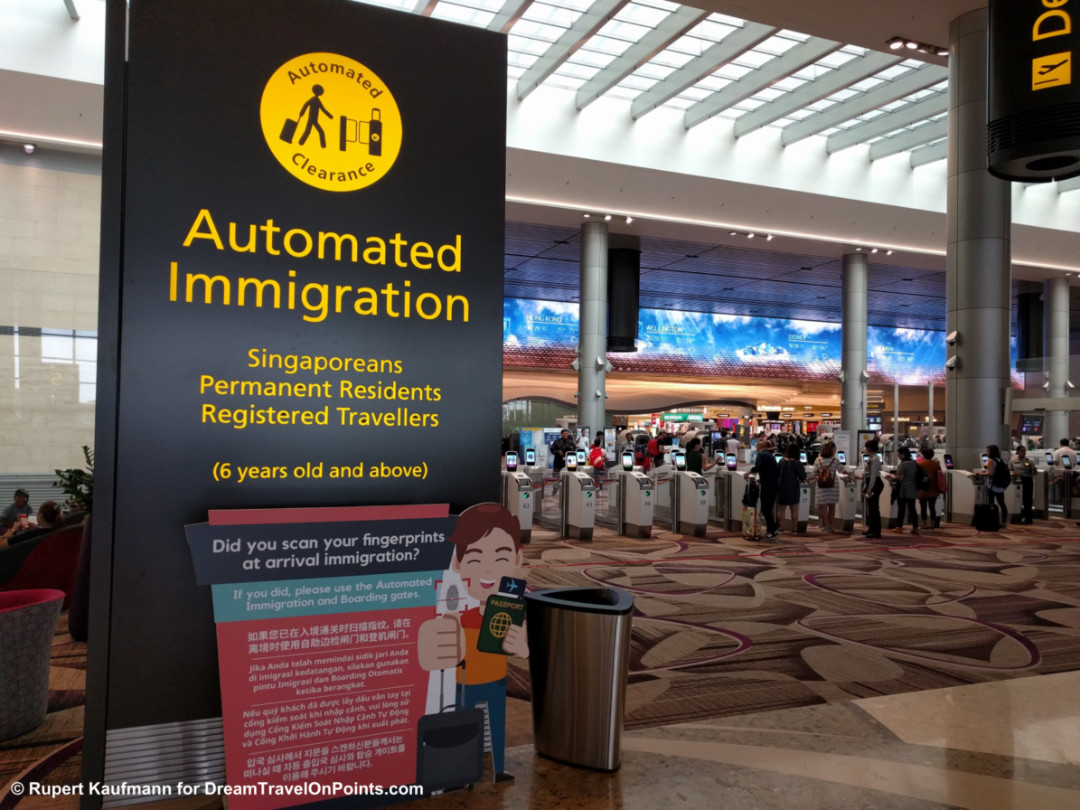 A common sight at other airports, but new for Changi, is the central security checkpoint. While you go through security at the gates of Terminals 1, 2 and 3, the new Terminal 4 only has one security checkpoint prior to entering the “airside” terminal. It has standard luggage scanners as well as full-body scanners and regular metal detectors alternating. If you prefer one over the other, pick your lane accordingly! There was no wait, but the experience is the same as elsewhere and there is certainly no “self service” here – all checkpoints are staffed! 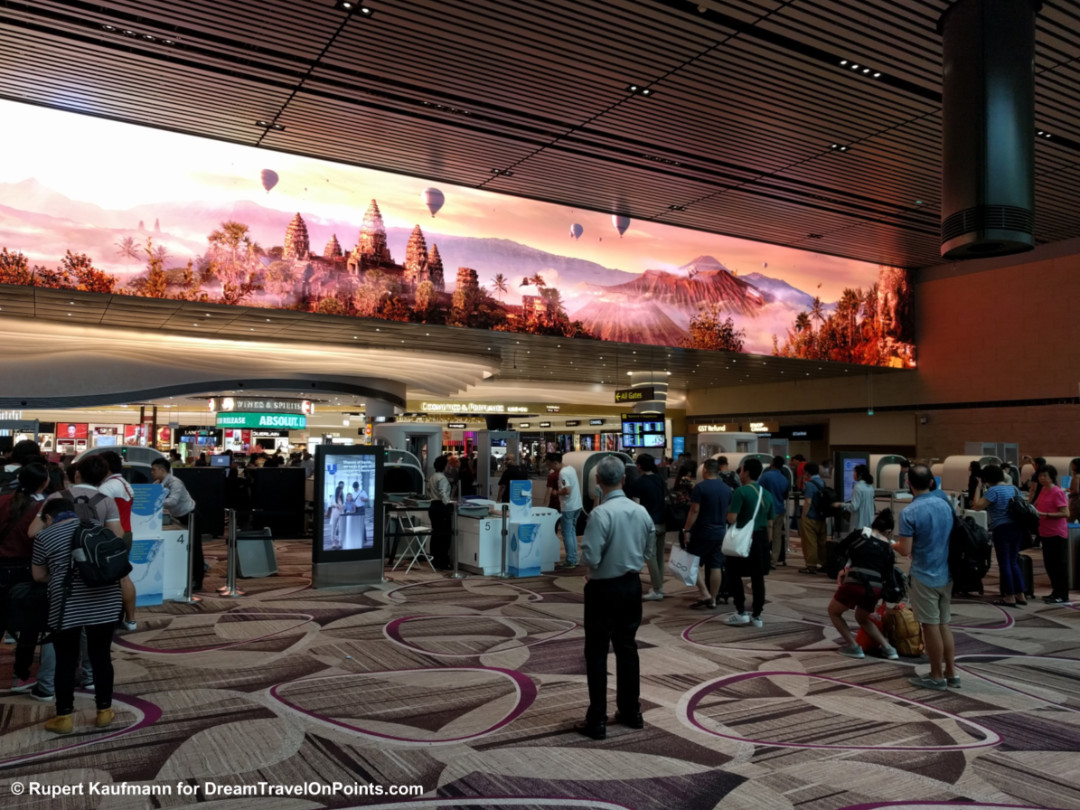 While the old budget terminal offered only limited services, the new Terminal 4 offers the full range of services. You are welcomed by what feels more like a mall and entertainment center with jet bridges than an airport. There are plenty of restaurants, food stalls and shops spread out over two stories, keeping your stomach full and your wallet empty. 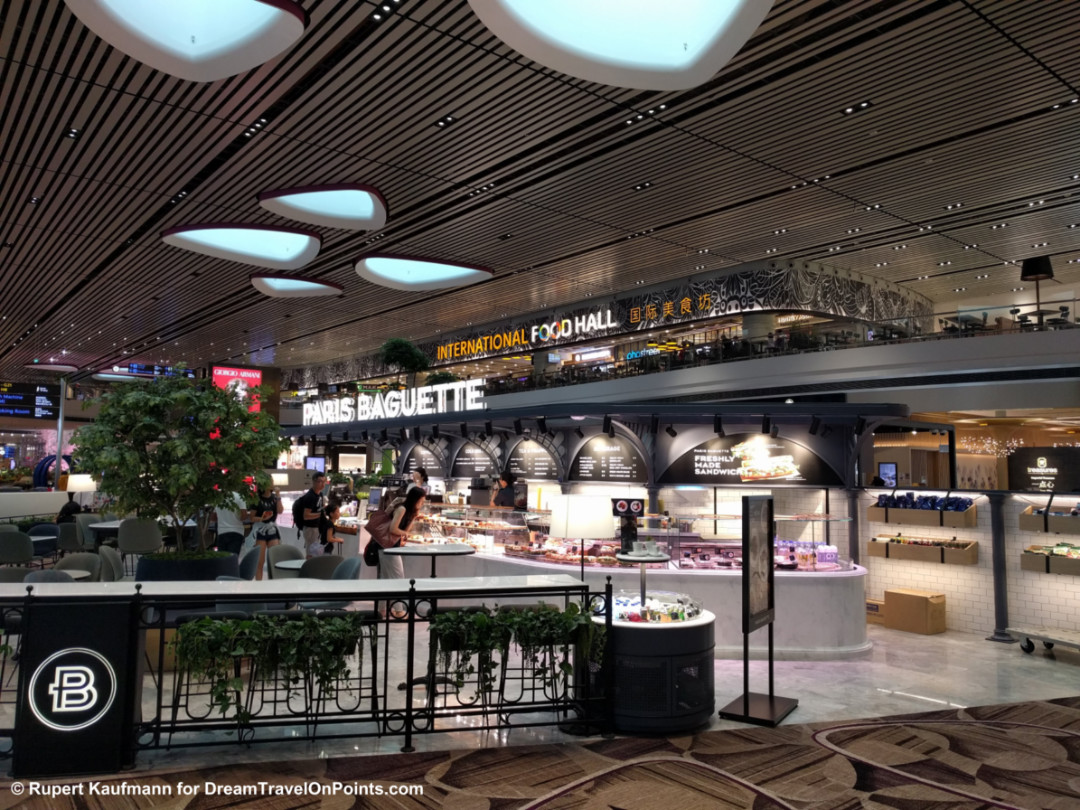 It’s easy to spend your time till departure here – there are computers to browse the web (and safe your phone’s battery! 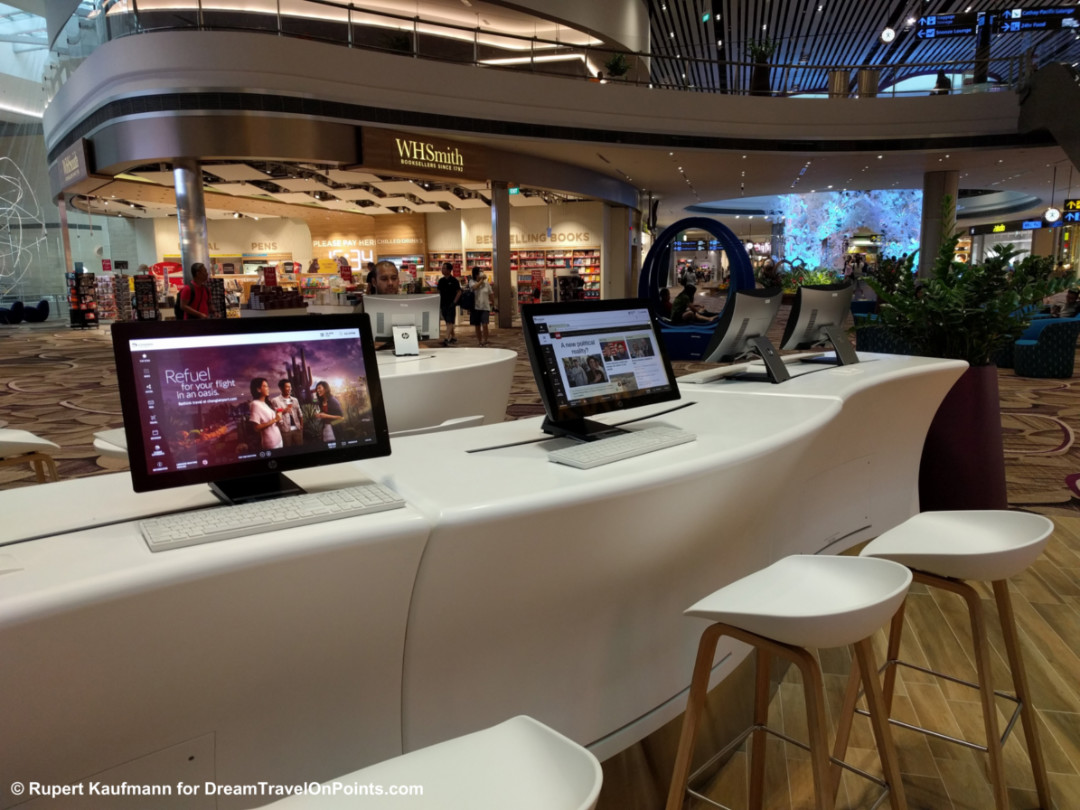 You can watch the latest sports competition on large-screen TVs with comfortable, living room style seating. 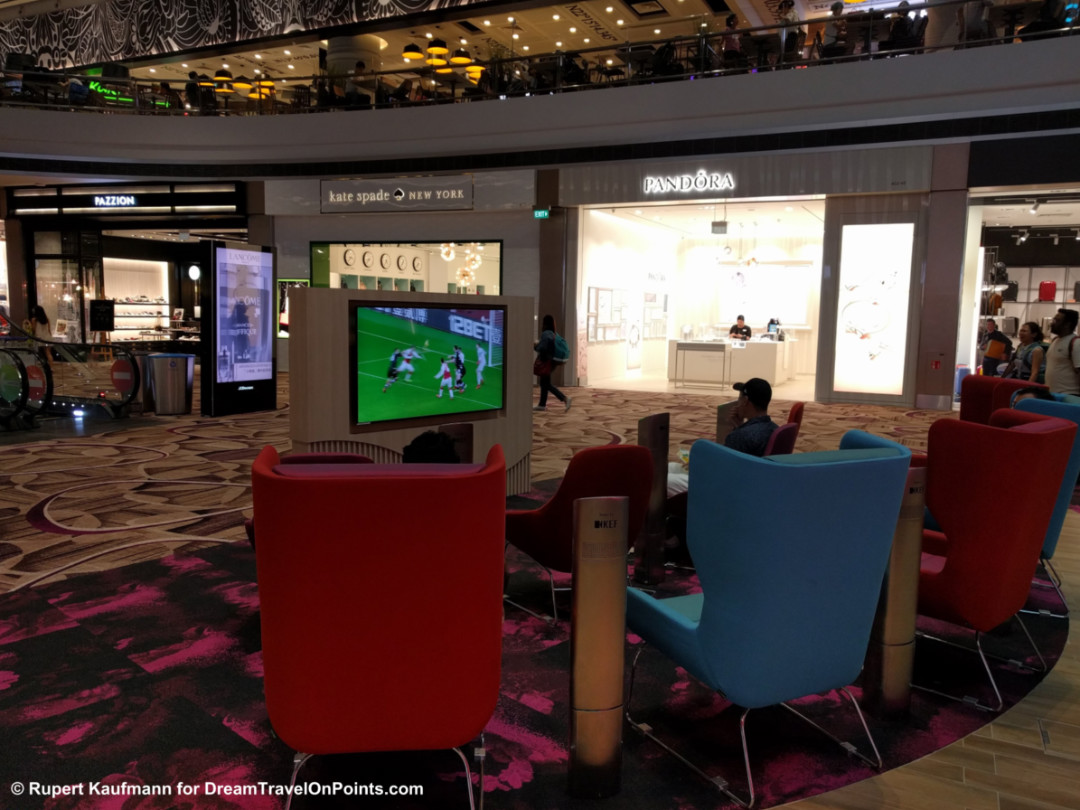 There are also seating areas with swooping couches and table-top computer games – a classic throw-back in this modern terminal! 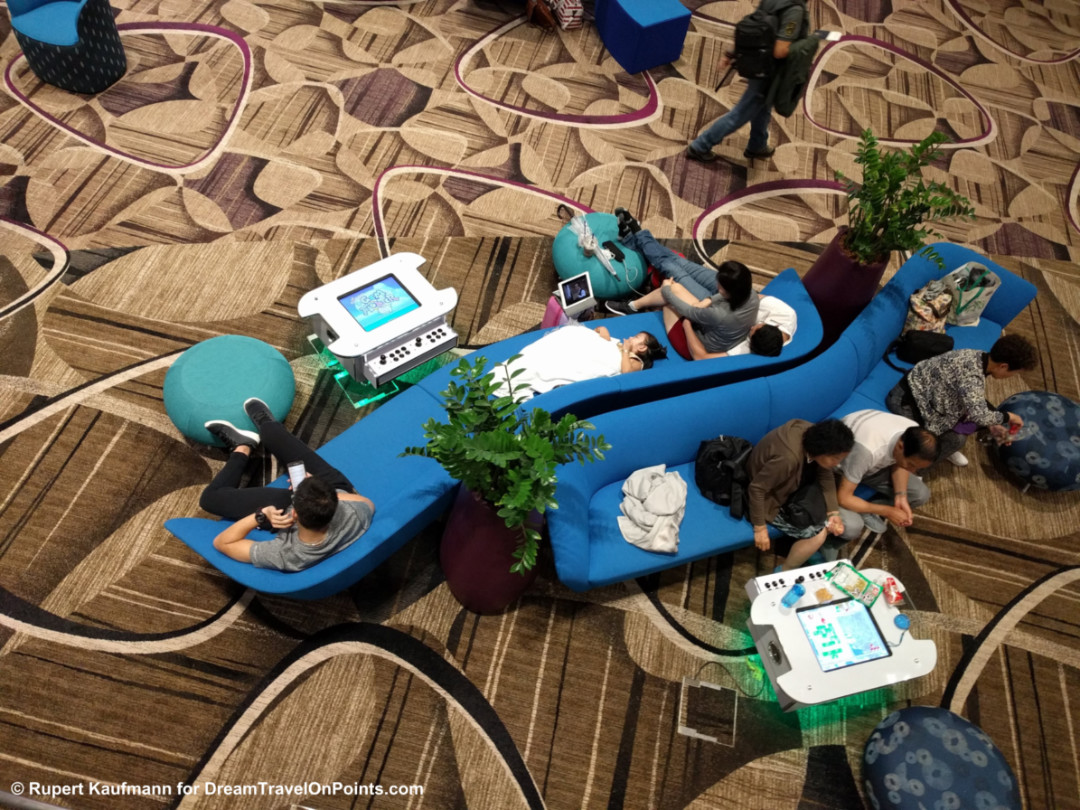 And if the kids get kranky, there is a mini-playground – although the soft spirals were mostly occupied by adults taking a nap! At least THEY won’t be cranky on their flight! 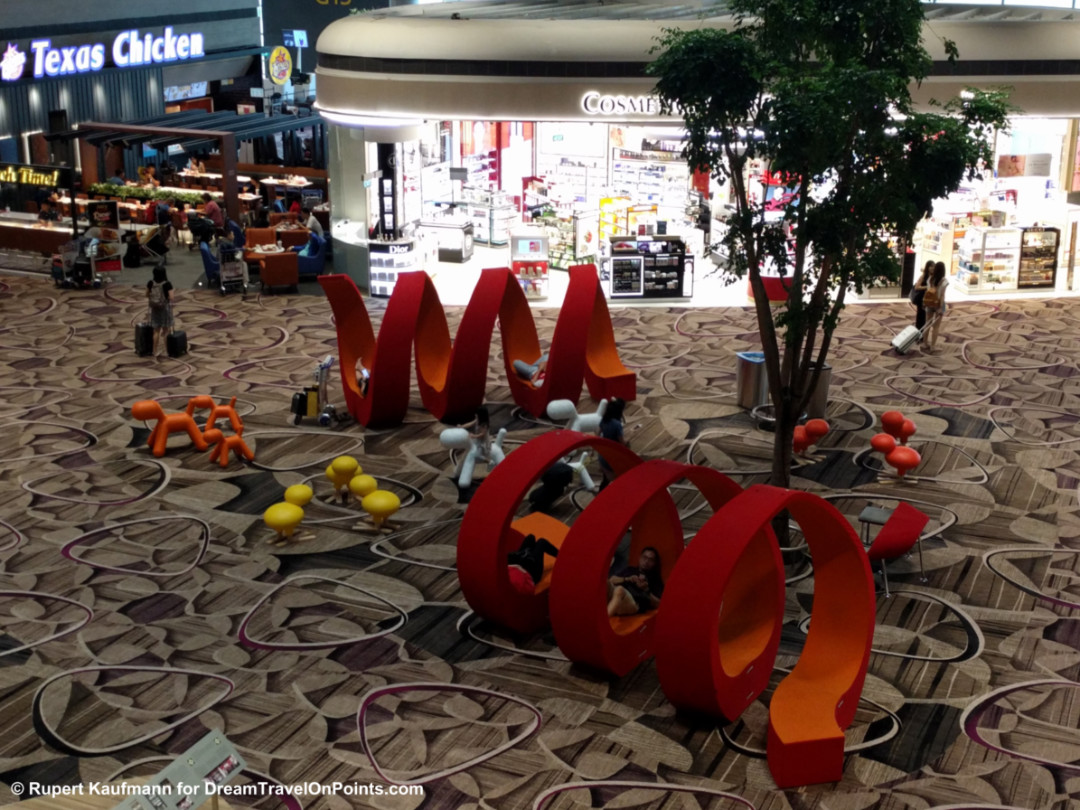 If you don’t miss your flight with all these distractions, you’ll see the last bit of high-tech at the boarding gate. All gates feature fully automated gates that are linked to immigration and security. You’ll scan your boarding pass and your photo is taken to match with your photo from immigration, validating that the person boarding matches the boarding pass! This is the same technology Lufthansa is testing at Los Angeles Airport and it’s significantly speeding up the boarding process. It worked flawlessly in my case! 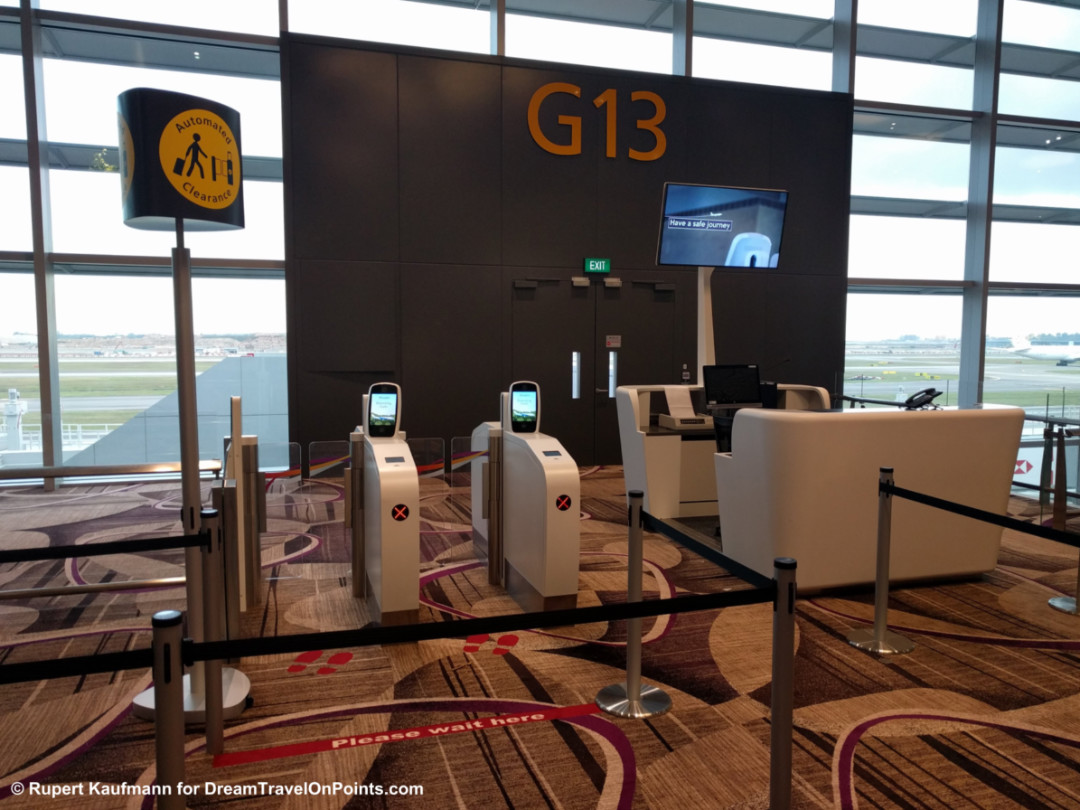 Bottomline: With the mix of high-tech features and endless options to spend your time with entertainment, shopping or food, Changi’s new Terminal 4 is a delightful place to start your trip. It’s such a drastic difference from the miserable experience many US and European airports provide, I have no doubt Singapore’s Changi Airport will keep the crown of Best Airport for a while – and that’s without the new (Crown) Jewel opening later in 2018! You might want to arrive early at the airport on your next trip to check it all out!