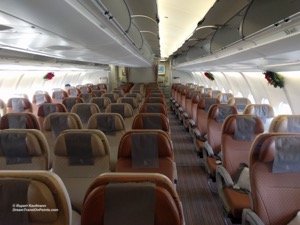 Singapore Airlines (SQ) became my favorite airline, after many flights in Business class while I was living and working in Singapore – I enjoyed their great seats, food and outstanding service. But even if Business Class (my review) or First Class (my review) is not in the budget, their Economy Class also has a good hard product and excellent service. For a recent trip to Yangon and Bagan, we were able to get Singapore Airlines ticket during a sale at competitive prices. Check out how we liked Economy Class!

Pre-departure: We booked our tickets during a sale, which required going to their office and purchasing the tickets in person – something I haven’t done in ages! While this is common in the Philippines, I find it outdated and inconvenient.
For all destinations except the US SQ has a weight concept and allows 30kg of checked luggage in economy class, with an extra 20g for StarAlliance and KrisFlyer Gold members or an extra 30kg for PPS members.
You are also allowed a carry-on luggage of standard dimensions up to 7kg and a (small) personal item. SQ is fairly generous and I have never seen them weigh a carry on on countless flights. That should suffice for most travel needs!

Flight Experience Boeing B777-200: While SQ has some wonderful cabins on their new planes, low-cost routes like Manila-Singapore are served by very old Boeing B777-200 that are at the end of their aesthetic lifecycle. The economy class cabin is configured in a comfortable 3-3-3 layout, much better than the 3-4-3 layout other airlines squeeze into a B777 these days. The seat pitch of 32 inch is comfortable, but the cloth seats were well worn and what little was left of the padding was not enough for a comfortable flight. 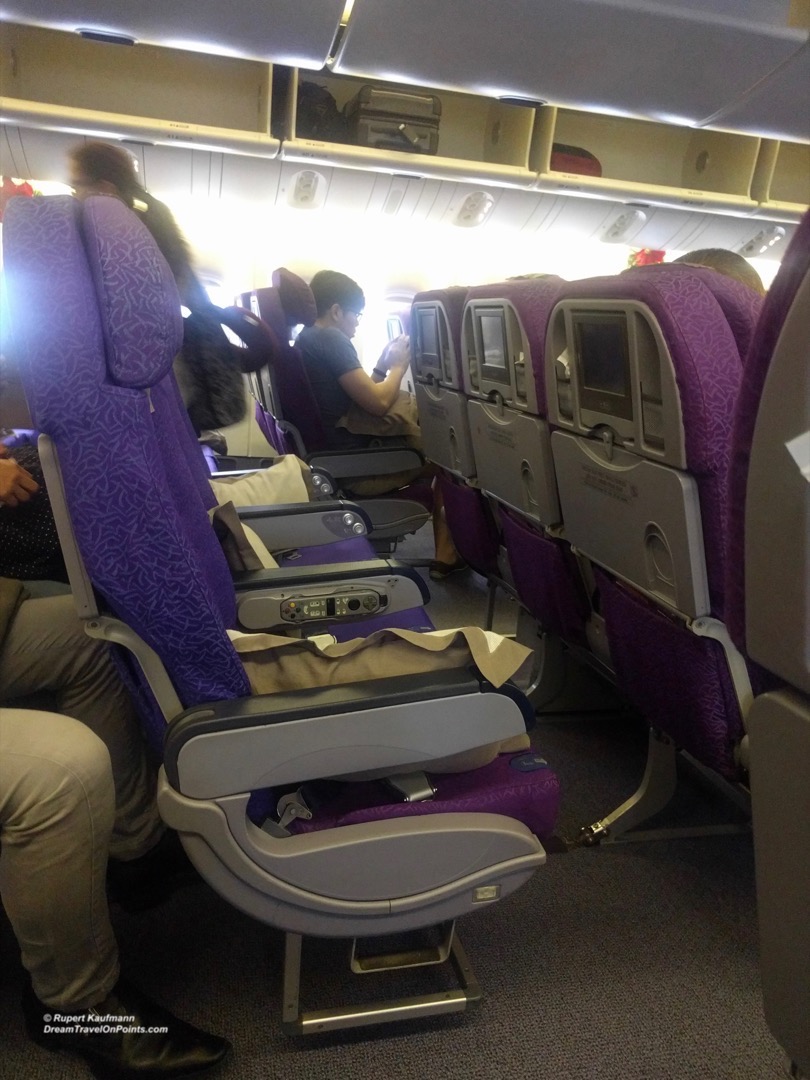 Each seat has a personal video screen that also shows its age – it’s very small (around 8in), is low resolution and very dim with faded out colors, making it difficult to view on daytime flights. The cable remote located in the side of the armrest is one of the worst designs on an airplane – it’s unintuitive and difficult to operate and despite being pretty slim, I frequently would activate it while it’s docked in the side of your seat! There is no USB or charging port, so make sure to have your devices fully charged before boarding. The selection of movies and TV is excellent though, from Hollywood blockbusters to regional films, there should be something for everybody! 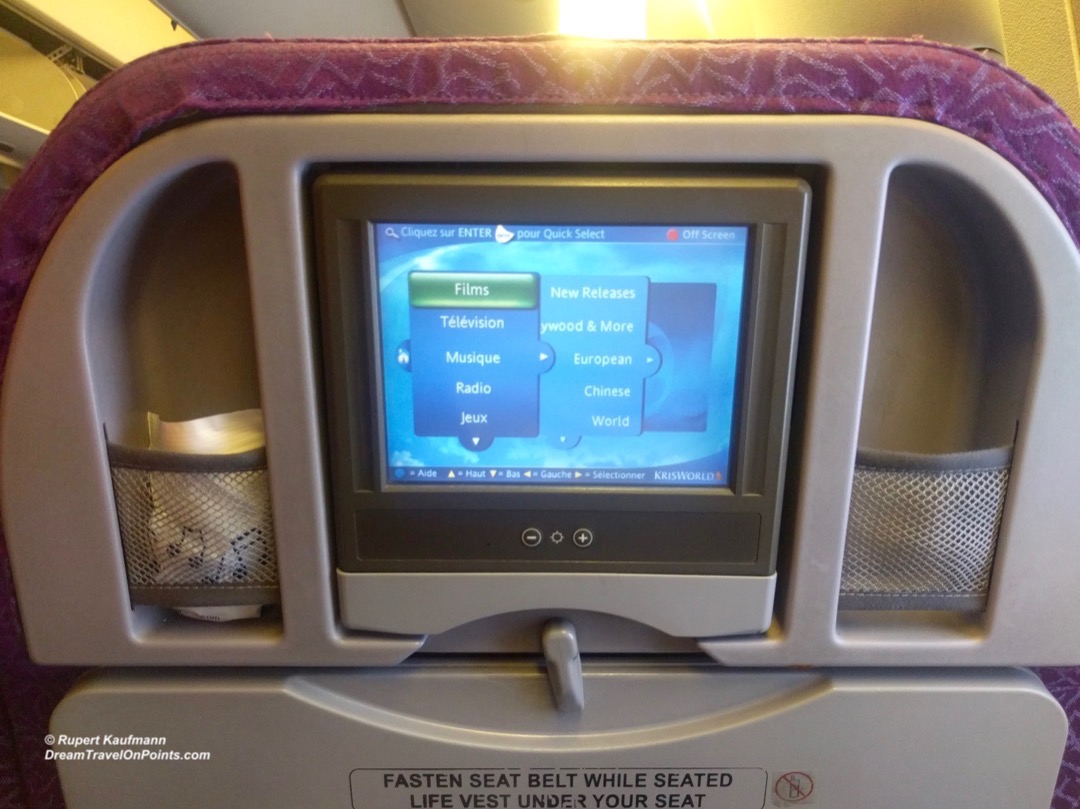 Singapore Airlines B777-200 is a plane I make every effort to avoid in business class (2-3-2 layout with recliner seats!) and economy – it’s a shame they are still flying it!

Flight Experience Airbus A330-300: Singapore Airline’s A330-300 is a much newer plane, configured for regional flights with a 2-4-2 layout in Economy Class and a seat pitch of 32 inches. The newer economy seats are held in beige/brown and have more comfortable padding, making for a much better flight. 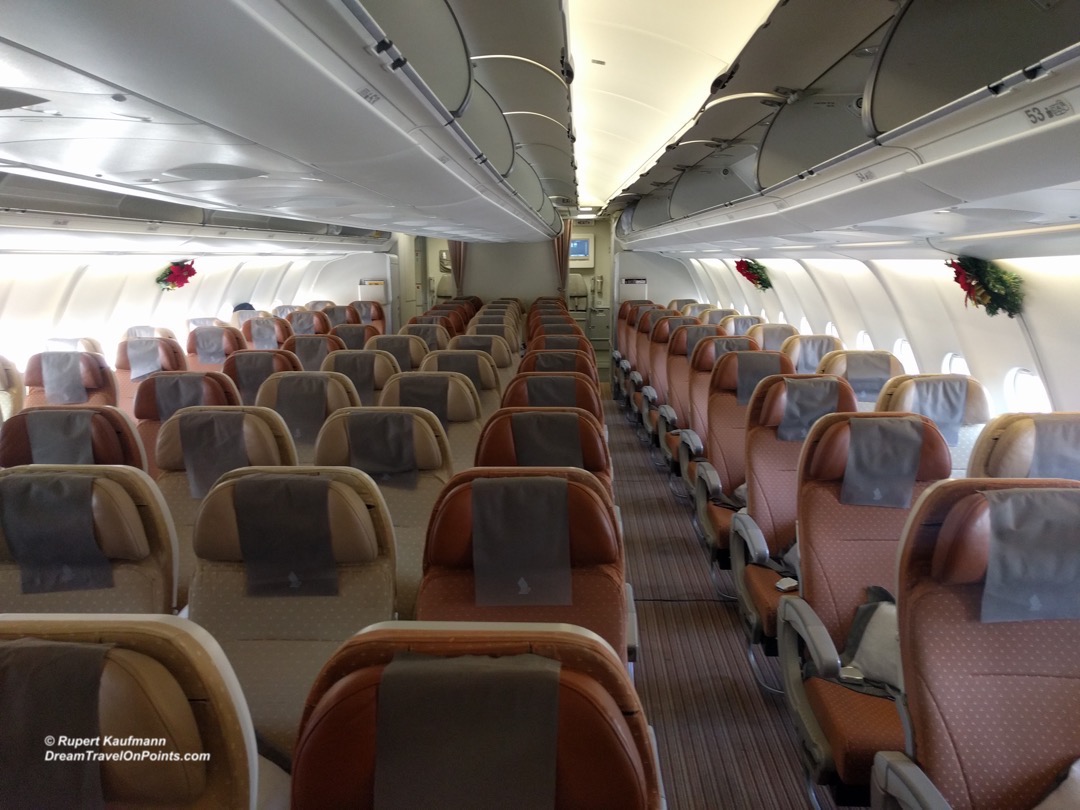 They also have newer personal video screens that are bigger, higher resolution and brighter to enjoy the great selection of movies, TV Shows and music. The remote is installed below the screen and is much more intuitive. You’ll also get a USB port to charge your phone or tablet, audio ports as well as a cup holder and a coat hook! That’s about as many features as you can squeeze into a narrow economy seat! 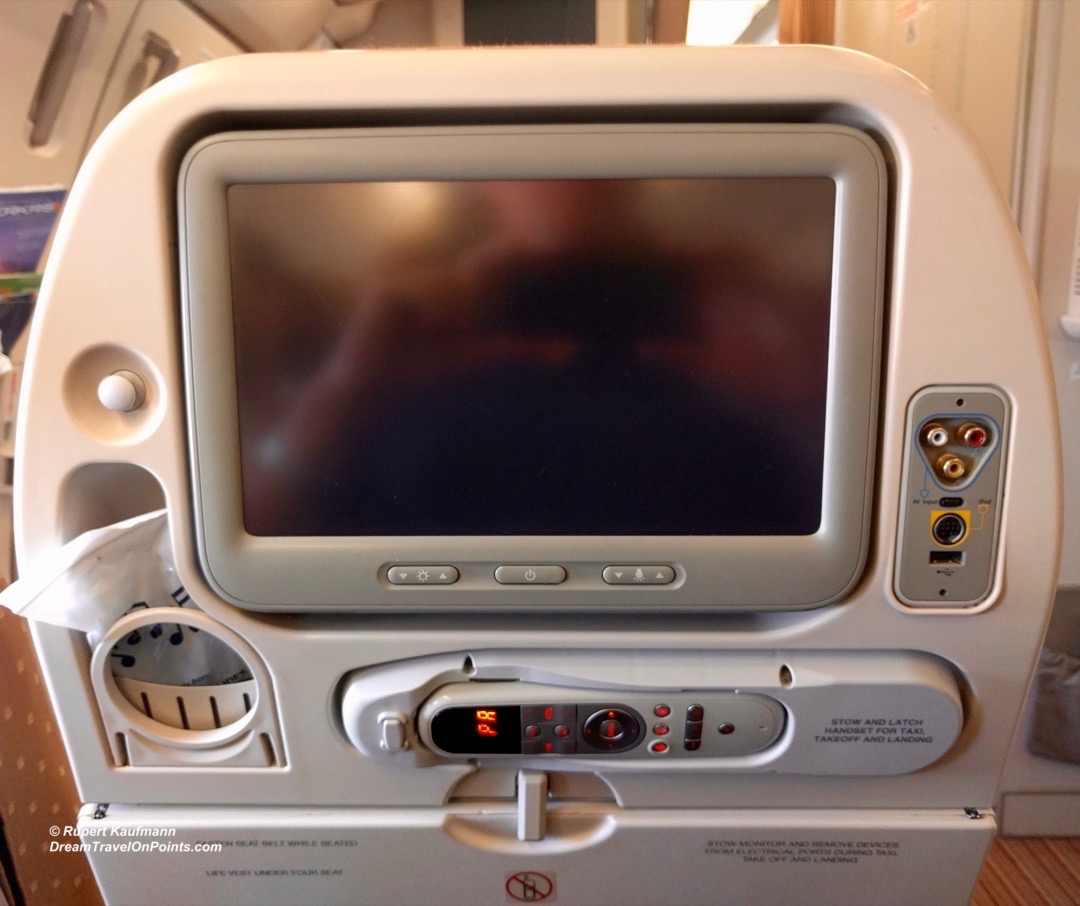 Onboard Service is really what makes Singapore Airlines stand out. And even when flying Economy Class, it is friendly and attentive to a degree I haven’t found on a US3 airline in years! Even in Economy, SQ provides free headsets for the entertainment, they come around with printed food & drink menus and will do multiple rounds of drinks. Even more important is that they are doing it with a smile, are attentive to individual needs and especially helpful to families, senior travelers and others who need special assistance.

Food served onboard is also very good and deserves top honors! You receive a printed menu with the list of appetizer, a choice of main courses and the dessert, as well as a list of available drinks, including wine, beer, cocktails (!) and spirits! 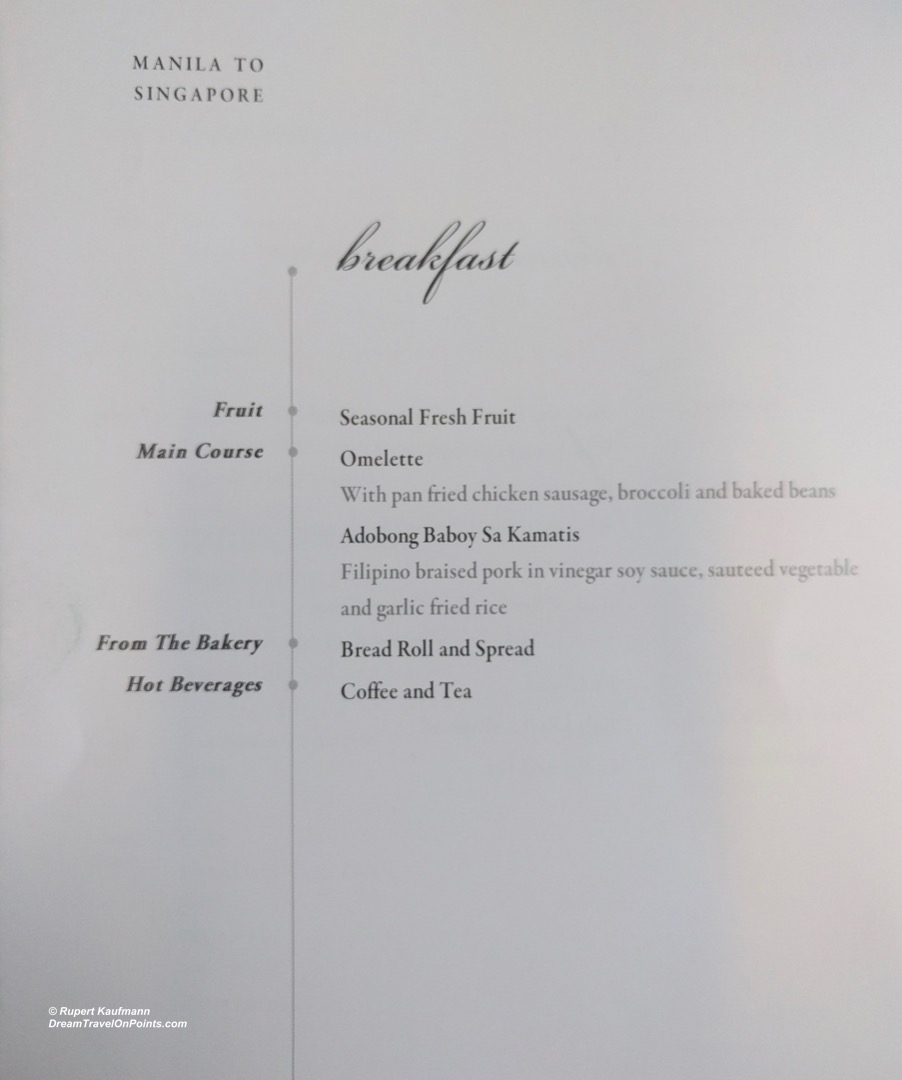 On each flight, there was a choice of Western or Eastern meals. On our morning flight, I chose the omelette, that was served on a tray with fresh fruit, a bread roll, coffee and juice. While it wasn’t a culinary delight, it’s some of the better food you’ll find in economy class with good quality food items and good portions. 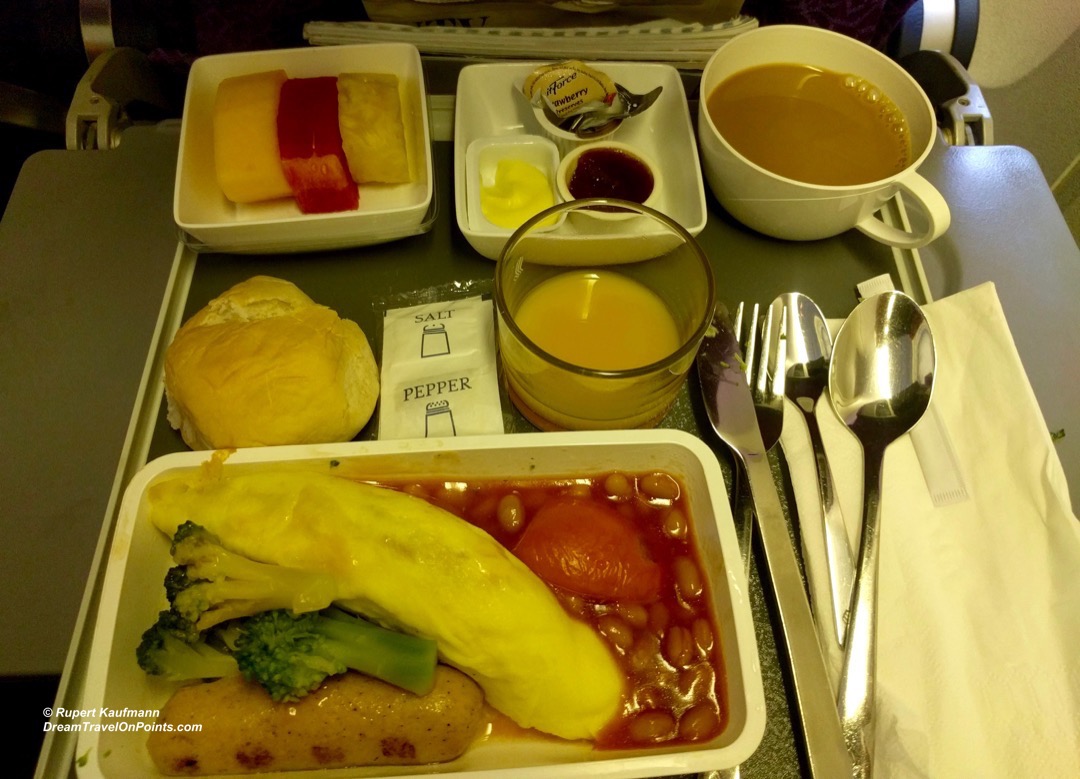 On our evening flight, I picked the chicken with mashed potatoes, served on a tray with salad, bread rolls and followed by ice cream – any economy meal that ends with ice cream is a winner in my book! I also indulged in a glass of wine with my meal and it was better than most economy class wines (and some business class wines – looking at you, United!). 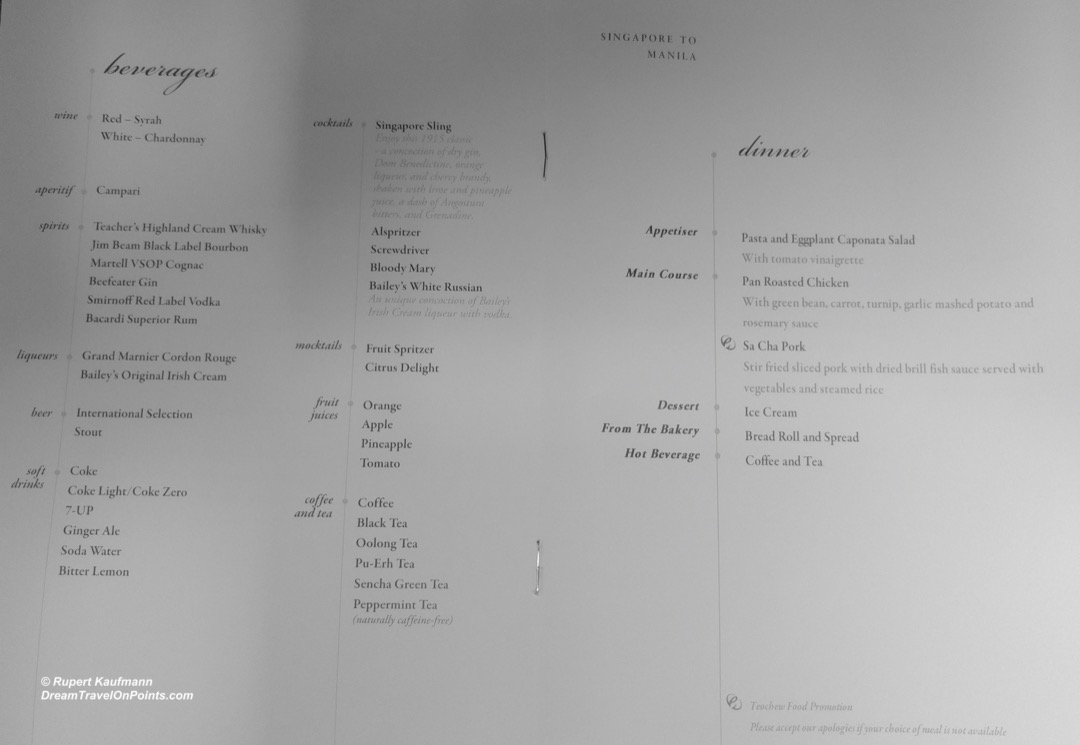 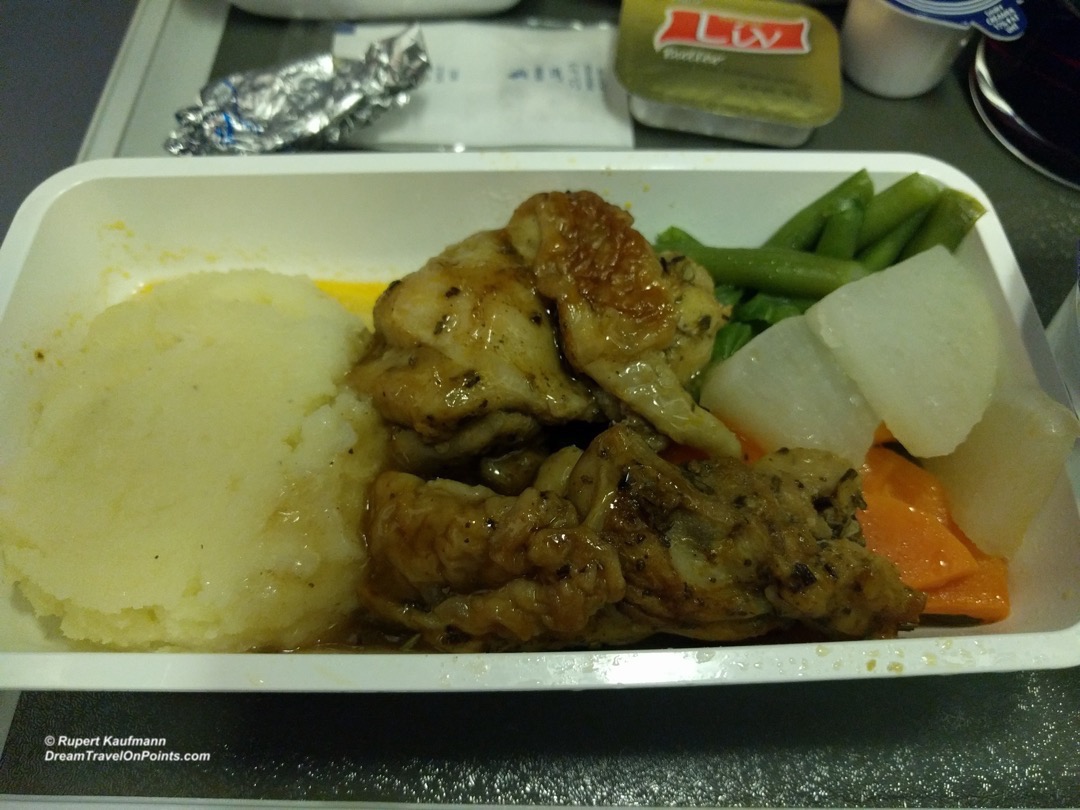 Even on our short-haul, day-time flight, a meal was served (although without the printed menus). We had one beef dish with rice and a chicken with potatoes dish, each served with a small salad and a mystery cake, served on a tray with water, followed by drinks from the drink cart. 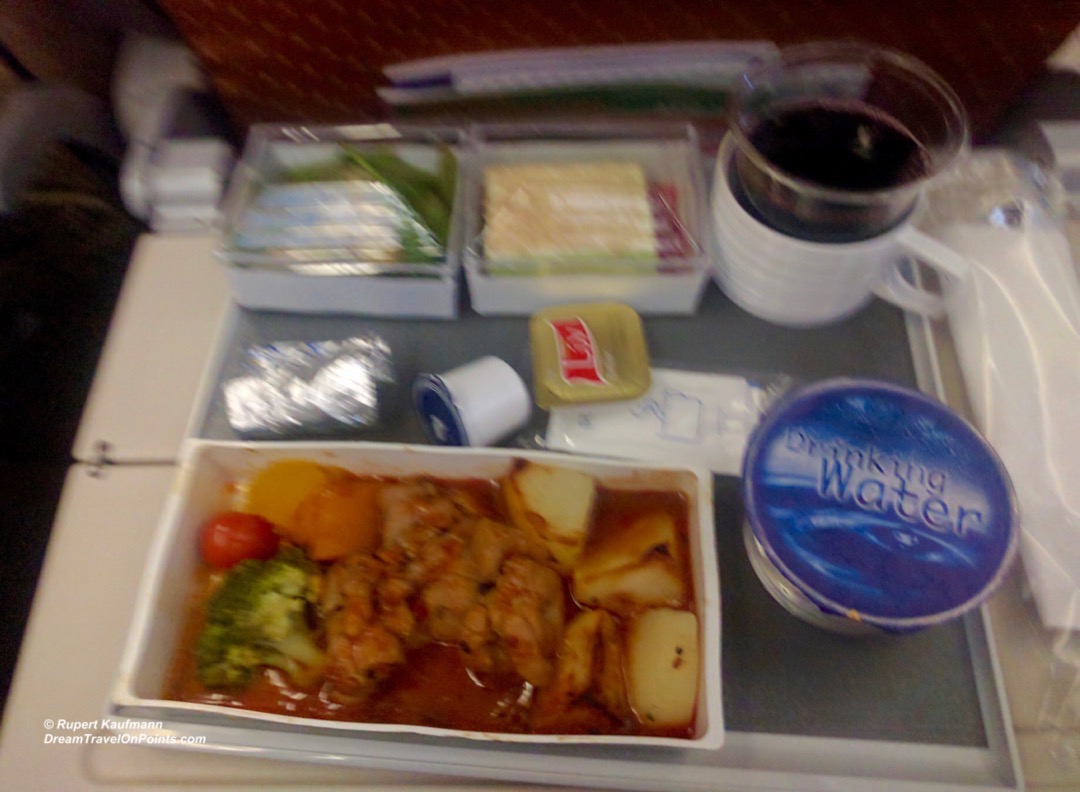 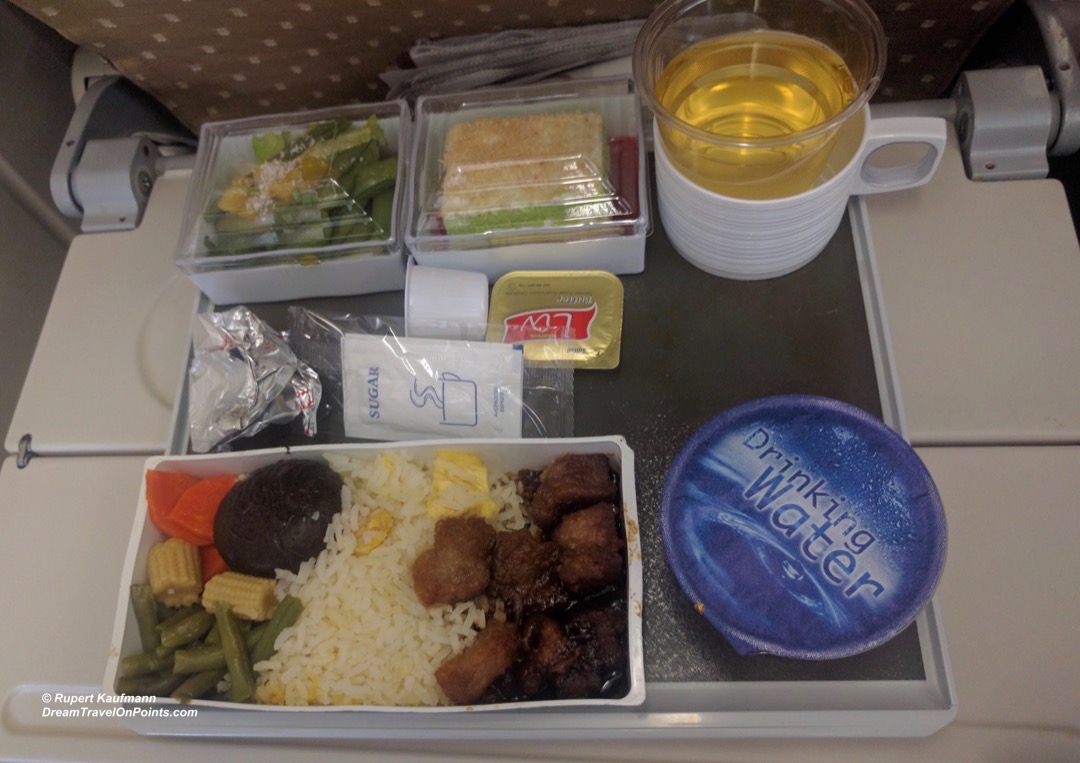 Rewards: If you are choosing Singapore Airlines to earn KrisFlyer miles or miles on a StarAlliance carrier, look at the fare class of your ticket carefully. Many of the lowest economy fares (that I’d consider competitive with other carriers) don’t earn any StarAlliance miles and often few even in KrisFlyer. Our discount ticket for example only earned 10% of the distance flown!

Bottomline: Despite the race to the bottom worldwide, led by low-cost carriers, there are still some airlines offering a much better economy class experience – and Singapore Airlines is one of them. You get spacious seats, friendly, attentive service, personal video screens with varied entertainment and good food. All of that combined adds up to a very pleasant experience, rather than the A-to-B transport the low-cost carriers, US3 airlines and many others offer. I’m willing to pay extra for that experience, maybe a mark-up of 10-15%, especially for longer flights. Do look out for the planes used though – just as in Business Class, SQ flies very different plane configurations, and I would avoid their old planes with bad seats and poor video screens!