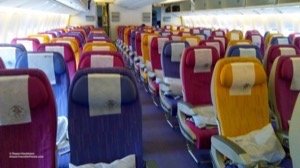 Thai Airways is one of my favorite airlines for traveling in premium cabins  – their Business Class and First Class service is excellent and I really enjoy the journey! While Thai Economy is not nearly as luxurious, you are welcomed by the same Thai Smile and friendly service – find out what else you’ll get!

Pre-departure: I booked my most recent ticket for a flight between Manila and Bangkok online on Thai Airway’s website, which kinda works most of the time. It’s not as functional or reliable as most airline websites in the US or Europe, but with a little bit of patience, you’ll get the ticket and will be able to track your flight and check in online as well.
For economy class travel within Asia as well as to Europe, the maximum checked luggage is 30kg. For travel to the US, it’s two pieces up to 23kg. StarAlliance Gold members get an additional 20kg. You are also allowed a carry-on luggage of standard dimensions up to 7kg and a (small) personal item. This is a generous allowance and a lot more than I typically need!

Flight Experience Boeing B777-300: Thai Airways flies a number of different configurations of the B777 and on these flights I was lucky enough to fly a newer version of the regional plane. It has a 3-3-3 layout, giving you a nice 18in seat width (compared to many airlines 3-4-3 layout) and a 31-32 inch pitch. That’s ok for short, regional flights, comparable to Singapore Airlines and much better than the 29in pitch on the low-cost carriers. The seats are in a mix of purple, pink and yellow, which makes for a very bright and colorful cabin! 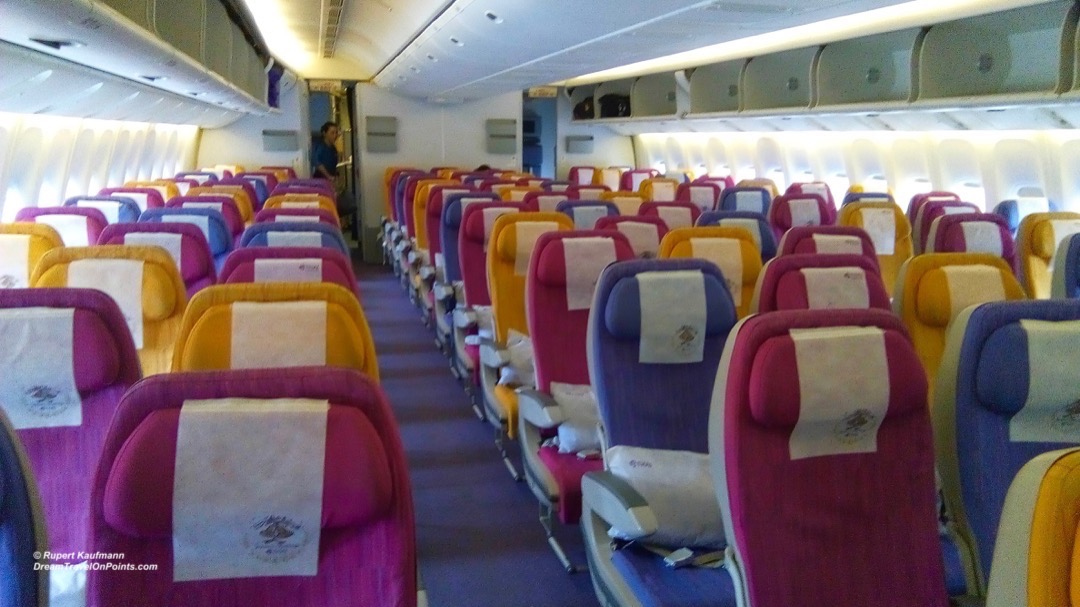 Each seat has a personal video screen of approx. 9 inches that was bright and good resolution, making it easy to watch even during day time. The wired controller is in the armrest to the side and easy to use. The system offers a selection of Thai, regional and international movies and TV shows, as well as music and games. I’ve always been able to find something to watch and the selection and quality is comparable to other Asian carriers. 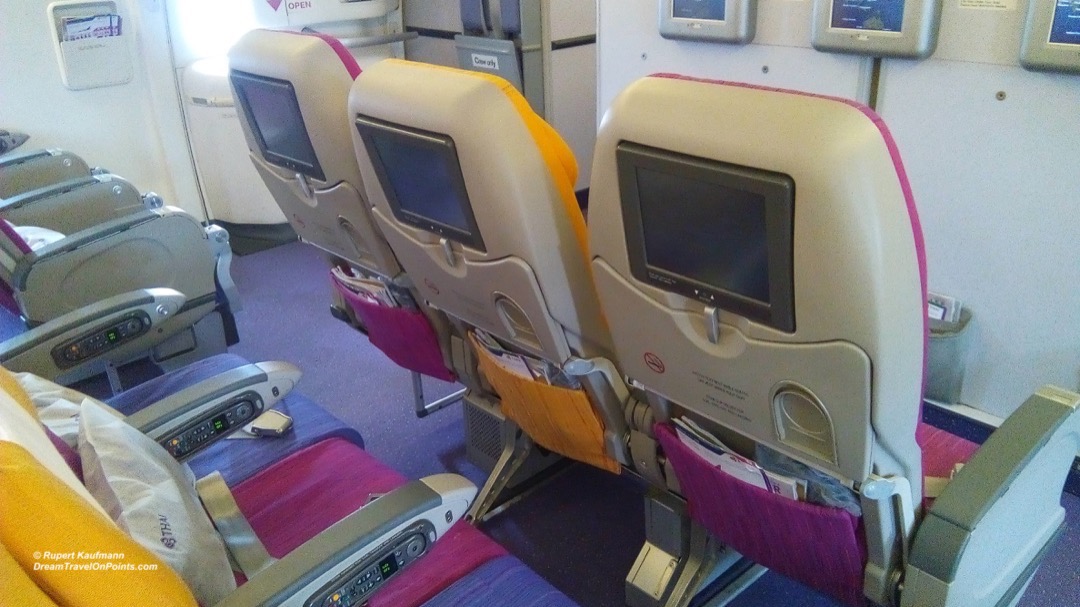 Flight Experience Boeing B777-200: Thai still has some very old B777 used on low-cost regional routes (including sometimes Manila – Bangkok). While they have the same 3-3-3 layout with 18in width and 31-32in pitch, they don’t have personal video screens and instead have the old-style overhead monitors with entertainment depending on the route. While it’s still better than a low-cost carrier without any entertainment, I do my best to avoid these B777-200 whenever possible.

Flight Experience Boeing B737: Thai Airways uses narrow-body B737 for short-haul routes. They are configured in the typical 3-3 layout and feature the same colorful purple, pink and yellow seats. The seats are only 17.2in wide, but have a good 32in pitch, giving you plenty of space on those short flights. The planes have overhead monitors, but the entertainment value is limited on the short flights they are used on. 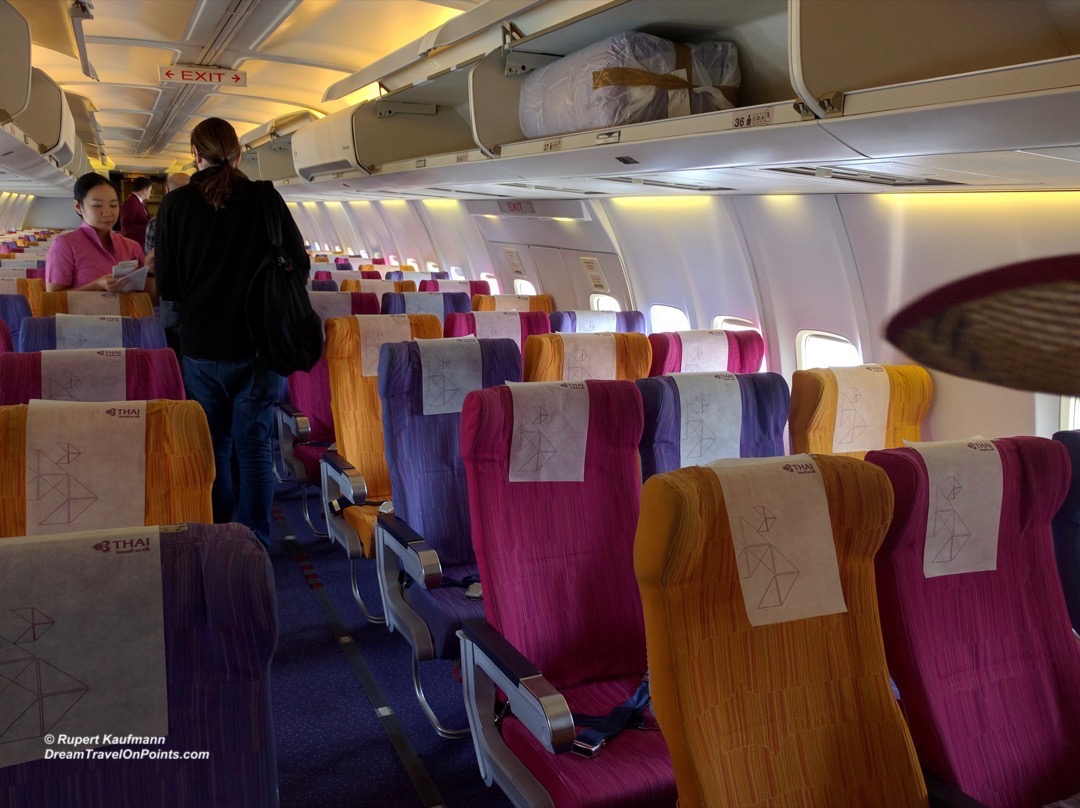 Onboard Service is what I like most about Thai Airways and has made me a fan of their Thai Business Class and Thai First Class. The cabin crew wears stunning traditional outfits and welcomes you with a friendly smile, even if you are flying in the back of the bus! Even though they have a lot less time per passenger than in front, they do make the flight a lot more pleasant than what you’ll experience on a US airline.
Thai Airways maintains the full-service offering on all of their flights and is serving food and drink onboard, even on flights of only 1h. The menu varies based on the length of flight and destination.
On my most recent trip from Manila, I received a three-course meal served on a tray, with a mystery salad and bread roll, a main course of noodles and beef and fruit for dessert, as well as water and drinks including wine or beer. The main dish was very tasty and big enough to serve as a meal. The fruit was fresh, but I skipped the salad of hard to identify ingredients. Sorry for the blurry picture –  I added it for a general idea! 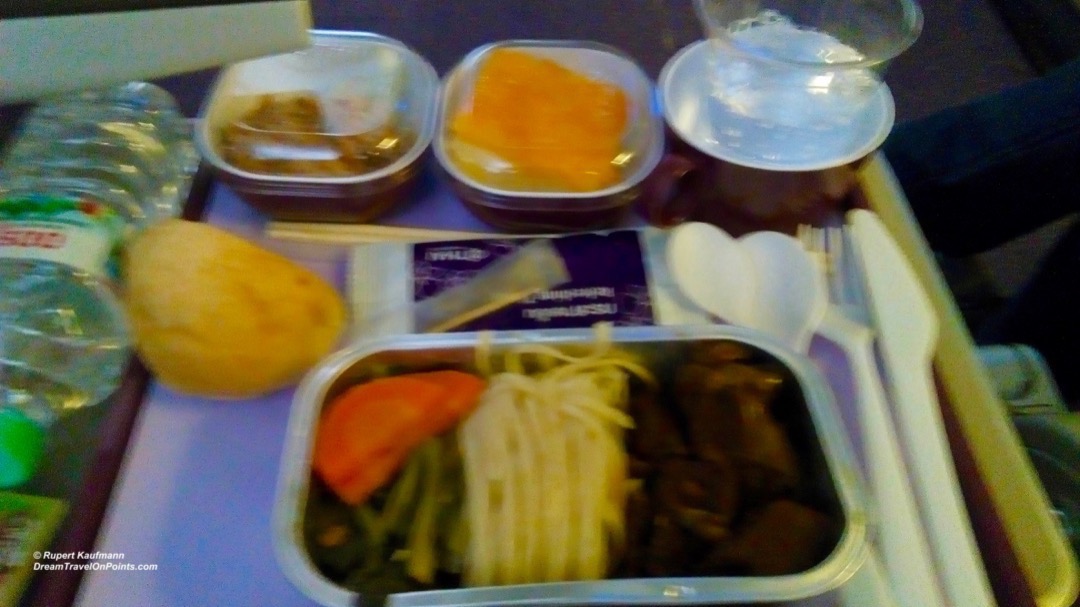 Even on two short-haul flights of around 1h on B737, a meal was served in a box, consisting of a cold salad, a small cake and water. 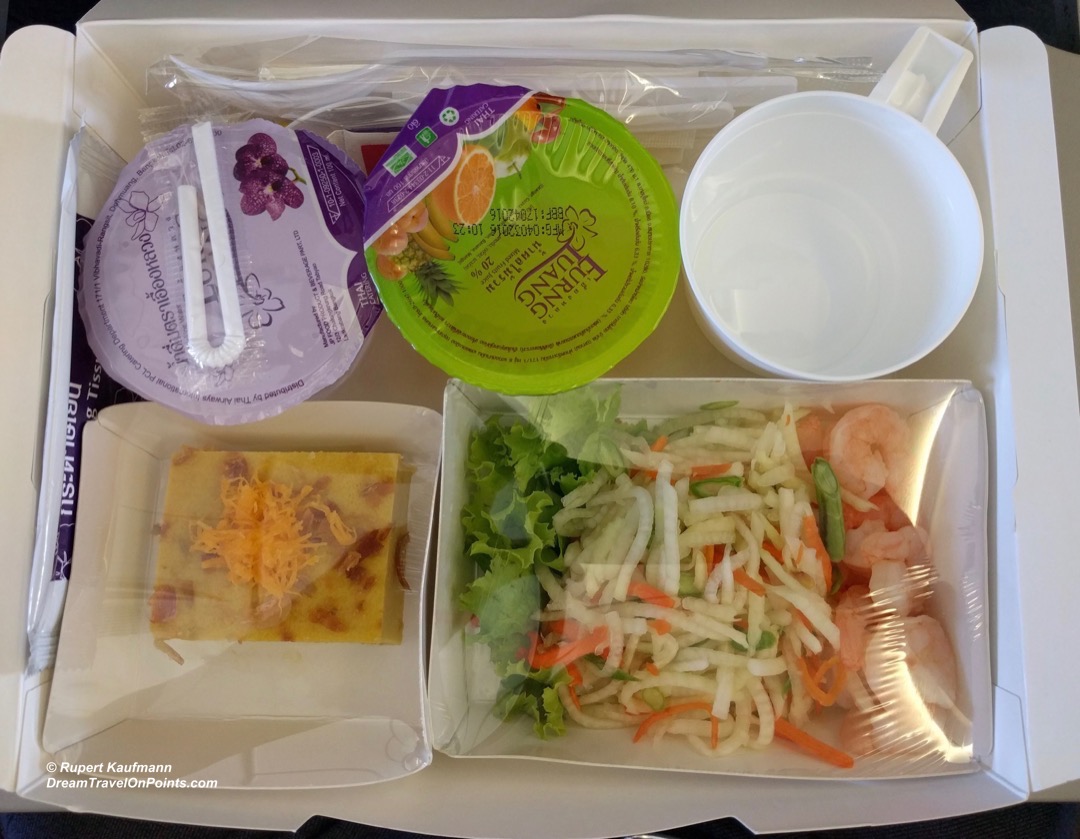 While I appreciate receiving a meal, the quality was significantly less impressive than on the longer flights and I didn’t eat much of it. 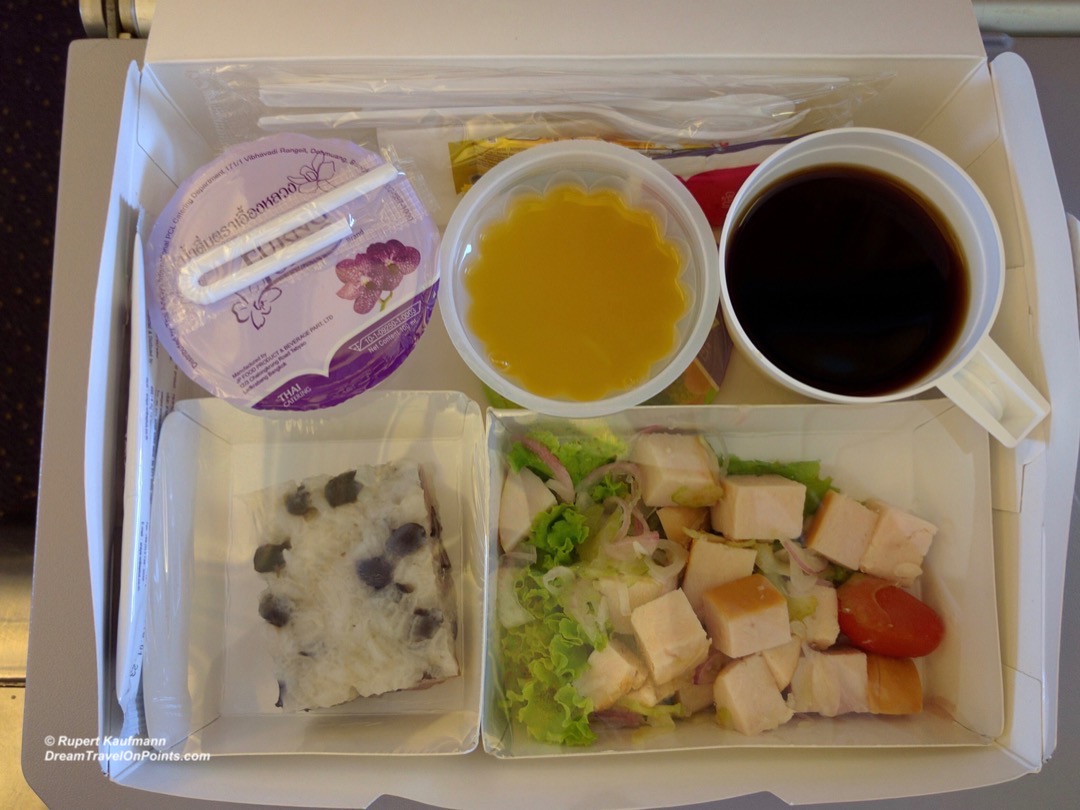 Rewards: Similar to other Asian carriers, Thai Airways limits the number of miles you earn in their Royal Orchid Rewards Program on discounted economy tickets to 25% and you don’t earn any miles on the cheapest tickets, eliminating one of the differentiators to low-cost carriers.
As a StarAlliance Gold member, I was able to use Business Class counter for check-in and the Thai Airways Lounge D and Lounge C at Bangkok Airport. Thai Airways also allows priority boarding, which was enforced on each flight I took. There is no way to select better seats online, but asking staff politely at check-in has gotten me an exit row seat on occasion.

Bottomline: Thai Airways is competing with other premium carriers like Singapore Airlines, Asiana or All Nippon Air (ANA) across the region as well as with low-cost carriers like Air Asia or Cebu Pacific. Despite the price pressure and (recently) competitive pricing, Thai Airways has maintained a superior product with a comfortable 3-3-3 layout on B777, food and drink on all flights, friendly service as well as StarAlliance elite benefits. I’m willing to pay a little extra for that service and comfort to enjoy a better flight experience, even if I don’t earn any miles. There is still a place for premium carriers and I’d recommend to give it a try when the price is right!