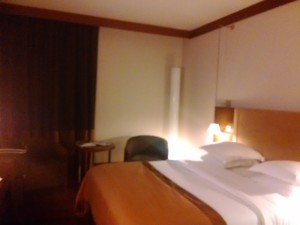 Our trip to Paris for the New Years celebration, one of the most expensive times of the year for hotels, send me looking for an upscale hotel we could stay with points – and the Radisson Blu Champs Elysees was our first place to rest our heads. It turned out to be a beautiful hotel in a convenient location with some hick-ups in the service.

Location: The Radisson Blu Champs Elysees is a short walk from, you guessed it, the Champs Elysees and the Arc de Triomphe. That makes it convenient for tourists who have those locations on their schedule. It’s also close to the the Charles de Gaulle – Etoile train station, with access to one (longer distance) RER and three Metro lines to get you quickly and easily to other sights and destinations in Paris. The only downside to the closeness to a lot of tourist highlights is, well, that the area is very touristy. The fact that it is so easily accessible for tourists might be a turn-off to the repeat visitors. 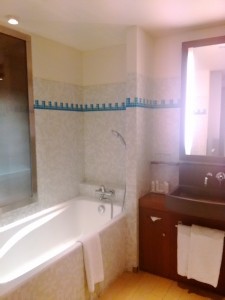 Room: This Radisson Blu is a contemporary hotel with the hallways and rooms in dark colors. They are nice and inoffensive, but lack the special touch and character other Radisson Blu hotels have. The bedroom was of good size by Parisian standards (still qualifying as small in the US and tiny in Texas). There was enough room to walk around the bed and store our luggage. The bathroom was positively huge with a separate deep soaking tub and shower, a nice concrete’ish looking sink and plenty of space to get ready. The room also had all the amenities you’d expect from an upscale hotel, like the flat screen TV, coffee/tea facilities and minibar, a safe, comfortable bed linens and towels and high-end toiletries.

Amenities: The hotel has a bar and restaurant, both of which seemed to be deserted most of the time, despite the hotel being sold out. With so many nice restaurants in walking distance, that doesn’t come as much of a surprise. Unfortunately, there isn’t much else offered: No pool, no gym, no wellness area, no spa. While that is not unusual even for an upscale hotel in Paris, it doesn’t help this Radisson Blu to differentiate it either.

Service: We arrived late in the evening and the night staff checked us in. That was more of a problem than expected, as the lady in charge had limited experience in English (and I don’t speak any French), making the selection of the reserved “queen” bed over “twin” beds a YouTube worthy episode. My Club Carlson status wasn’t recognized either, with no upgrade or welcome and our request for a late check-out was declined. Housekeeping was thorough in cleaning, but a request for missing towels was also lost in translation and responded too after a lengthy period of time. The check-out was quick and the bell boys helpful with our luggage and a taxi on departure. Overall, the service was a bit of a let down. While most of the issues were with the night shift, an upscale hotel with rates starting at $250/night (and over $400 during our stay) needs to do better than this.

Overall, I had mixed feelings about the hotel. The room and location were very good, but service and amenities were just average (or less) for this price class. Other reviewers had better luck with the service, so we might have just caught the wrong person on a bad day. If you are looking to use Cub Carlson points or discounted rates (read more here), this is still a good choice and I’d try it again. I’d be more hesitant to spend over $250/night with the many choices of hotels you have in Paris.