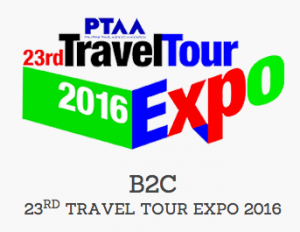 Every year in February, the Philippine travel industry holds the countries largest travel fair, for industry representatives and travelers alike. You can learn a lot about the regions in the Philippines as well as the neighboring countries and what they have to offer. Anybody should be able to find a new destination to discover! And fortunately, you can also score some of the best deals for airfares and hotels from a long list of travel providers, so it’s worth to visit and save some serious money on tickets and hotels!

Some of the sales are available online through the weekend, other deals are only available in person at the fair, so despite the long lines, it’s worth visiting – both for inspiration as well as the greatest savings.

Here are some of the deals available from different airlines:

Philippine Airlines (PAL): During my first Travel Expo visit in 2014, we scored some amazing deals from PAL, including a $1,400 fare for business class tickets to Europe. Unfortunately, those days are gone and the PAL deals are not nearly as exciting. But you can find some good deals in Economy class across the region (all round-trip economy, net fares):
MNL-Taipei: $120
MNL-Bali: $$220
MNL-Sydney: $400
CEB-Los Angeles: $575

Cebu Pacific: Cebu Pacific has ongoing sales, some better than others. They also have a sale now, with fares available online. It’s comparable to other recent deals with domestic fares starting at PHP499 and international fares starting at PHP1,499. Most of the prices are lower than Philippine Airlines. I’d consider the economy class comparable, so you might as well buy the cheaper Cebu Pacific tickets! Here are some examples (all one-way economy, all in):
MNL-Caticlan (Boracay): PHP684
CEB-Singapore/Taipei: PHP1,499
MNL-Bali/Phuket: PHP1,999
MNL-Sydney: PHP5,999
You can find and book all their sales fares (available through February 7) here!

Singapore Airlines: Is one of the best airlines in the world and is also offering a sale. It is celebrating 50 years of flying to the Philippines and extends to February 29, so you have a little extra time to make a decision (all tickets are round trip economy, net fares):
MNL-Dubai: $606 (all-in $750)
MNL-Cape Town: $691 (all-in $750)
MNL-Melbourne: $589 (all-in $680)
MNL-San Francisco/Los Angeles: $840 (all-in$950)
They also have Premium Economy and Business Class on Sale.

Etihad Airlines is holding a “Chinese New Years” sale to coincide with the Travel Expo. They are also a premium airline and a great choice to Europe, with some examples (economy, round trip):
MNL-Berlin, Germany: $880
MNL-Rome, Italy: $858
MNL-Madrid, Spain: $848
They also have a business class sale with fares undercutting PAL: you get a better product than PAL at a lower price – I’d call that a great deal.
You can find and book Etihad tickets here!

Emirates is another premium carrier, comparable to Etihad, and offers some great fares, better than either Etihad or PAL (economy, round trip, all-in):
MNL-Amsterdam, Netherlands: $686
MNL-Copenhagen, Denmark: $677
MNL-London GTW: $808
Their business class fares are also very competitive and you can find and book all of them here!

The Travel Expo is held at the SMX Convention Center, Pasay City, next to the Mall of Asia from February 5-6, 2016, 10:00am-9:00p, and February 7, 2017, 10:00am-7:00pm! Entrance fee is PHP60 (PHP40 for students and seniors; free for Citibank card holders). You can find the list of all (more than 300 exhibitors) here!
If you do go, make sure to bring comfortable shoes – the halls are big and there will be a lot of walking and standing in line. Insider tip: Most exhibitors offer small flyers with their prices. To get the best deal, I’d recommend to collect all the flyers (split up if you come as a couple/family), ask if the deals are available online (so you can book from home), find the best deals for where you want to go, decide on the airline and than get in line to purchase whatever tickets you want! Don’t skip the Chinese airlines, like China Southern or Air China, they offered some of the best deals last year!
Good luck and I hope you find a great deal! I will update this post tomorrow with any exciting deals I find!