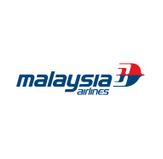 Malaysia Airlines is the flag-carrier of Malaysia and has most recently made news with the two tragic accidents of flights MH370 and MH17 in 2014 as well as the bankruptcy, mass layoffs and reorganization in 2015. Despite these challenges, Malaysia Airlines is continuing to operate and you can find out more about them below! 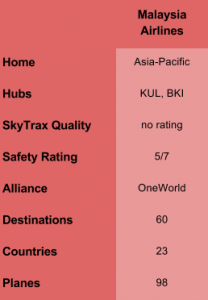 Malaysia Airlines – who are they? Malaysia Airlines (airline code MH) is based out of Kuala Lumpur’s International Airport (KUL). They serve 60 destinations around the world, mostly in Asia, with some flights to Europe, the Middle East and Australia. They currently operate a fleet of 98 planes, with a mix of propeller, narrow-body and wide-body jets. They are cutting unprofitable routes and are trying to sell some of their long-haul planes, so both the number of destinations and planes are subject to change!
Skytrax no longer offers a rating of Malaysia Airlines, probably a result of the crashes and bankruptcy. In the most recent World Airline Awards 2015, Malaysia Airlines placed 24th (drop from 18th in 2014), one place ahead of local low-cost carrier AirAsia and far ahead of the big three US carriers!
Airline Ratings is giving them a 5 (out of 7) safety rating, deducting one star for the fatal crashes and one for Malaysia failing to pass the ICAO country audit.
Malaysia Airlines has a frequent flyer program, Enrich, and they are a member of the OneWorld alliance.

Why should I care? Malaysia airline is part of the OneWorld alliance and has a lot of connections in South East Asia, making them one (or sometimes the only option) to connect from other OneWorld carriers to a final destination in the region.
Malaysia Airline’s brand was damaged by the two fatal plane crashes and the ongoing news of their bankruptcy is not helping either, forcing MH to heavily discount their ticket prices. They have been running fare sales consistently over the last 18 months, often making them the cheapest full-service carrier on their routes.
As a member of the OneWorld alliance, you can use your points for their business and first class products, which (especially on their Airbus A380) have been well reviewed.

What else do I need to know? The two fatal plane crashes of 2014 are still under investigation and no final report has been issued. Many people have concerns about safety, but I don’t share those safety concerns and wrote about it here. Since then, reports of MH’s bankruptcy and corruption have added to the issue.
Malaysia Airlines formally declared bankruptcy in 2015, with their new CEO Christoph Mueller declaring that the company can’t be changed and they need to start over from scratch. All employees were terminated and about ⅔ received temporary contracts with some moving to the new entity by September 1, 2015. Some of the planes and other assets will also be moved to the new entity and the brand, routes and operations are under review.
MH claims that daily operations continue unchanged and there is no impact for passengers – having been through corporate reorganizations myself, it remains to be seen if MH can deliver on that promise. I have booked three tickets myself and will report on my experience soon – make sure to read my reports before purchasing your own tickets!