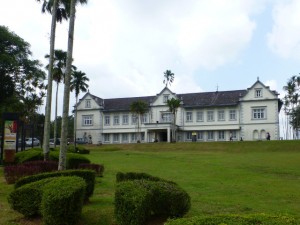 The Sarawak Museum is close to downtown Kuching, a short stroll from Merdaka Square. It’s housed in a historic buiding from 1891 and covers a number of different topics. The one that made the trip worth it for me was an excellent exhibit about the traditional longhouses so typical for the inhabitants of Borneo. On the upper floor you will find a model to walk through, as well as background information on the differences of the longhouses built by different ethnic groups. I found it interesting to learn about the history, the reasons for building them and how the communities lived in them. You can also learn about some of the other customs and rituals that were observed in the longhouse communities. There is a video that goes into more details and shows some of the longhouse still existing today. It’s an architectural style and community living that hasn’t developed anywhere else I’ve been like this! If you don’t get a chance to visit one of the longhouse communities during your stay in Sarawak, you should take the time for the museum visit to get some interesting historic background in a very short time!

On one of my flights I met a retired couple who had spent their whole live in a longhouse 4 hours from Kuching. They described the size of the long house by the number of doors – with each “door” being for one apartment housing one family. In their case, the village of over 200 people lived in 50 apartments in the same long house, creating quite a community. Interestingly, they were going to visit their daughters in Kuala Lumpur, both having moved from the long house on Borneo to the cities on the Malaysian peninsula!

On the ground floor of the museum, you’ll find a natural history exhibit with the mammals, birds, ocean and freshwater fish, snakes and spiders you can find in Sarawak. It’s a good introduction to the nature around you, although I wouldn’t call it a must-see. The in the guidebooks promised “ethnographic” exhibit is a collection of somewhat random items on display. There is also supposed to be an art exhibit, which was closed during my visit, and an Islamic museum, which is closed every Friday.

With the museum so close to the center of town and the entrance free during my visit, you should really swing by and check out at least the longhouse exhibit! What you’ll learn about headhunting alone will make for a good story at home!