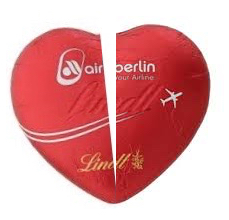 airberlin has announced their final flight after 39 years of operation – AB6210 from Munich to Berlin on October 27th, 2017! While the holding company will soldier on, there will be no flights with an airberlin flight number after this day. In an odd twist of fate, award tickets booked through airberlin’s reward program, topbonus, on partner airlines like British Airways or Etihad, are still valid and will be honored based on the latest email from the company! 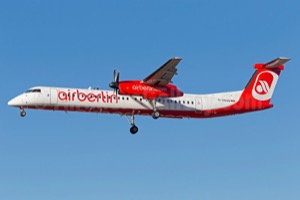 Lufthansa (LH) and airberlin closed a deal for LH to purchase a total of 81 planes for EUR210 Million, including the regional airline Luftfahrtgesellschaft Walter (LGW) and Austrian leisure carrier Niki and thousands of airport slots. LGW operates 20 Bombardier Q400 turboprop planes on short-haul routes and will continue to do so under the old airline code HE. flyniki operates 21 Airbus A320 planes to tourist destinations and will do that under their old code HG. Presumably  they continue to operate with their current crews, as Lufthansa is taking over the financial responsibility for those operations and brings the staff onboard.
With the end of the airberlin operating under the AB code, around 100,000 short- and medium-haul flight tickets will become invalid – hopes that Lufthansa would take over the airline and honor the tickets have been dashed. Tickets purchased before August 15th will be part of the insolvency with little value (the average debt recovery in German insolvencies is 2.2%).

The deal with the other preferred buyer, easyjet, is apparently in trouble and has not been closed. With the shutdown of Monarch Airlines, easyjet has another option to buy planes, crews and slots at bargain prices and has according to rumors lowered the price they are willing to pay for airberlin.
The negotiations for the sale of airberlin Technik, the technical services for plane maintenance, are also in trouble, because Lufthansa declared that their own service arm will take over maintenance of their new planes – while it’s hard to see how they could do that immediately, I guess they are betting that they can just hire the staff without having to pay for the business…

But the airberlin Holding soldiers on, with the easyjet and technical service deals still being worked on and approvals needed for the Lufthansa deal! LH certainly has gotten a sweet deal, taking over most of the market share, planes and crews, at little cost or liability to them. Consumers are facing reduced competition in the short term and I’d expect prices to go up until competition is restored.

In an odd twist of faith, topbonus the reward program is continuing its zombie-like existence: majority owned by Etihad and also in insolvency, they continue to look for a buyer of the program. As I reported earlier, they apparently have already paid partner airlines for award tickets and they remain valid. I just received another email that my Etihad award ticket will continue to be valid, despite airberlin shutting down their own operations.
That leaves me in a situation where I have a valid business class award ticket to Abu Dhabi, but no flight from Abu Dhabi to Berlin! I have made two “back up” reservations, one for the “missing” flight to Germany and one for the full flight, just incase the Etihad ticket gets cancelled last minute. It’s a little unsettling, but I might end up fortunate compared to 100,000s of people who lost their tickets completely!

If you feel nostalgic, you can fly on that last airberlin flight from Munich to Berlin on October 27th, just be prepared to find out that it might get cancelled – I’d expect any remaining flight to be subject to cancellation at short notice.
If you have purchased tickets before August 15th, 2017, you will be able to claim them as part of the insolvency. With an average insolvency quota of 2.2% it might not be worth the effort.
If you have purchased tickets after August 15th, 2017, you should be able to claim most of the price back.

It certainly is a sad day to see the end of an airline, but as I reported previously, it’s probably not the last European airline to go out of business.
If you’d like to get more travel related news like this from around the world, please follow me on Twitter – I’m posting news daily, so you can stay up to date on the world of travel with my Twitter updates! Or, for a weekly update, sign up for my newsletter for a Sunday Summary!