Lao Airlines is the national airlines of Laos – and if you are planning to visit its capital Vientiane or the beautiful UNESCO World Heritage listed town of Luang Prabang, you might find yourself on one of their planes. Read all the facts & figures to find out what to expect from Lao Airlines! 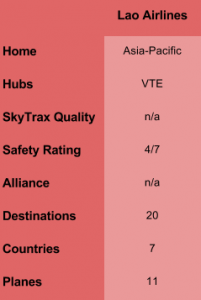 Who are they? Lao Airlines (QV) is the flag carrier of Laos. They are serving 7 domestic and 13 international destinations in the region. They operate a fleet of 11 Airbus A320 jets  and ATR72 propeller planes. That makes them the smallest airline I have written about to date!
Lao Airlines is a full-service carrier and offers a Business Class on their A320 planes, as well as Economy Class on all their planes.
SkyTrax hasn’t rated Lao Airlines, making it one of the few not on their list.
AirlineRatings gives them a 4 out of 7 rating, with 2 stars being deducted for not passing the IOSA Audit (something many low-cost or small airlines haven’t done, including Southwest, Ryan Air or AirAsia) and 1 for a fatal crash in 2013.
You might have heard about Lao Aviation, the predecessor company, due to a string of tragic crashes between 1979-2202. They rebranded in 2003 and started a fleet renewal with Western planes and have had a better safety record since, despite the fatal crash with an ATR72 in 2013. I’d consider it comparable in terms of safety to other small or low-cost carriers in the region.
Lao Airlines launched their own frequent flyer program in 2014, but doesn’t have any partners so far.

Why should I care? If you are planning a trip to Laos, and you should, Lao Airlines might be your only choice on domestic or some international routes. On routes from Thailand, they are competing with both AirAsia and Thai Airways, providing similar service and safety – and more choices. And if you have safety concerns, keep in mind that flying is still many times safer than taking a bus or boat across the country!

What else should I know? Lao Airlines is slowly joining the modern age and now has a website for online bookings. I bought my ticket online (through an OTA) and, despite some anxiety, the e-ticket worked out fine.
Laos is probably the slowest-paced country I know and that applies to the airline as well. The flight schedule for domestic flights is more of a rough idea for departure/arrival times, so relax and be patient.
All the airports in the country are small and it took me less than 20 minutes in each case to check in, go through security and reach the gate, so arriving 1h before departure should be plenty of time!
You can read more about the experience in my Lao Air Economy Class review.