KLM (KL) is the flag carrier of the Netherlands (read the facts & figures here). Since their merger with Air France, they are one of the biggest carriers in Europe and the world and they serve destinations around the world. I had a good experience on two recent flights – they offer a solid Economy class product for short flights around Europe! Read my review of their economy class for European flights below!

Pre-Departure: I booked my flights through Expedia, but I was able to access it on the KLM website and it was easy enough. I was able to select options and seats without issues. The online check-in worked fine on my first flight, but balked at my attempt to switch my SkyTeam membership number to Alitalia to take advantage of my Gold status. It didn’t recognize the number and denied me access to the better seats – slightly disappointing considering that was the only benefit I would get from my status on this trip. Surprisingly, the system did actually take the number and awarded the miles correctly (including status bonus).
Similar to other airlines, KLM is pretty skimpy with allowed luggage: on inner-European flights, you are only allowed 12 kg of carry on luggage (including a bag and personal item). A checked bag will cost you 20EUR at booking or 30EUR at the airport!  There is one free checked bag (up to 23 kg) on intercontinental flights and two bags for FlyingBlu Silver, Gold and Platinum or SkyTeam Elite and ElitePlus members.
At the airport, the service was efficient and professional in both cases, but not especially friendly – similar to Lufthansa. 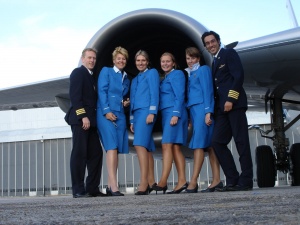 Service: The staff welcomed everybody entering the plane in their bright, blue uniforms, the announcements were professional and to the point. Once we had leveled off, they came around with drinks and snacks. They were quick and polite, with few words exchanged, and an occasional smile here and there. It was comparable to Lufthansa, better than the US carriers, but not as friendly and attentive as on Singapore Airlines or Thai Airways.
With both flights less than 3 hours, I was happy to see a snack being offered on each flight – something long gone from Economy class in the US. It was a sandwich on my outbound flight, fresh and tasty, if simple. I had a choice of various drinks, offered in a plastic cup. It was another sandwich on my return flight – with breakfast just behind me and a first class lounge ahead of me, I passed! The food was competitive to other European network carriers, basic but fresh and healthier than the junk food usually offered on US carriers for short-haul flights!
Neither plane had any onboard entertainment option, other than the inflight magazine. For short flights, that’s acceptable, but certainly doesn’t help to distinguish KLM from the budget carriers!

Hardproduct: Boeing B737: My outbound flight was a B737-800, used for longer European routes. KLM has the typical 3-3 seat layout, with only a 30 inch seat pitch in Economy! That’s pretty tight for my taste with minimal legroom for me at 1.91m / 6ft3, but unfortunately the new standard for European flights and the same as on Lufthansa or British Airways. The seats have marginal recline and are reasonably comfortable. 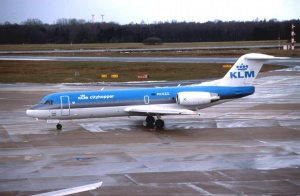 Fokker 70: I’m not really a fan of regional jets, but the Fokker 70 was a pleasant surprise. It has a fairly wide body, allowing for a 2-3 seat layout with full standing height, even for me. With a seat pitch of 31in they were more spacious than on the B737. The leather seats have fixed seatback without recline (“pre-reclined” in marketing speak), but are more comfortable than I thought. With the engines in the back, it’s also a pretty quiet flight and I’d take the F70 over the B737 any day! There was no entertainment other than the magazine, but the flight was short and I had no issue.
There was no WiFi on board of either flight, which was a little bit of a surprise, considering how frequently it is now available in the US.

Conclusion: Both of my flights were good and without issues. Once you take the price of the tickets into account, it’s hard to recommend KLM over a low-cost carrier. They are just not offering enough to differentiate themselves! With tightly packed seats, no recline, limited luggage allowance and no entertainment or wifi, it’s hard to justify paying the premium. I picked KLM for these flights, because they were the only option to get me to my destination non-stop. While I’d pick them again in a similar situation, I’d not go out of my way to fly them or select them over a cheaper carrier. They are best for a SkyTeam fan connecting through Amsterdam to elsewhere in Europe. For anybody else, I’d recommend to just follow the lowest price!