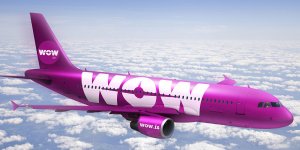 WOW Air was one of the low-cost carriers that sparked the fare wars over the North Atlantic, with one-way fares as low as $69 one-way, forcing competitors to respond. From their base in Iceland, they were able to fly across the Atlantic with narrow-body planes, which made for cheap, if uncomfortable flights. Now, their local competitor Iceland Air responded and bought WOW Air in an all-share deal at a bargain price!

I’m all for competition that increases consumer choices and reduces prices and reported regularly about WOW Air’s low fares on North Atlantic routes between Europe and the US. Now, it looks like they won’t be in business long enough for me to try them out! Iceland Air will purchase their local competitor in an all-share deal valued at only $18 million (without debt consideration), which sounded like a pretty sweet deal, resulting in Iceland Air shares to jump by 50%!

WOW Air only had 14 narrow-body and 3 wide-body Airbus planes, and even together, Iceland Air and WOW Air had less than 4% market share on transatlantic routes,  but they had an out-sized market impact with their low rates. Other LCCs, like much larger Norwegian Air, also offered low transatlantic fares, and ultimately, even full-service carriers offered round-trip fares under $400 on a regular bases.

It appears that route overlap between Iceland Air and WOW, competition from Norwegian Air and full-service carriers fighting back, as well as fuel price increases all were too much for WOW Air, putting them into a tough financial situation. After Primera Air folding earlier this year, they are the next LCC to fold.
Iceland Air said that they’ll keep the WOW Air brand. I’d expect them to eliminate the route-overlap and maybe move Iceland Air a little more upmarket. Due to the limited market share, I’d not expect the price wars over the North Atlantic to be over, but maybe a little less intense.
There are also rumors that Iceland Air might be interested in expanding to a hub in the Azores or Canary Islands for more Southerly routes. This would be a great move as they are in a very tough spot during winter to find alternative revenue sources.

I will keep looking for their deals and maybe will get a chance to fly them one way or the other. With the acquisition by Iceland Air, at least tickets purchased with WOW are safe and their is no risk of them folding due to financial problems.