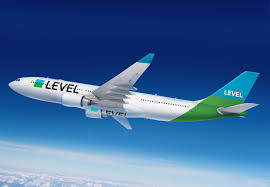 International Airlines Group (IAG), the owner of British Airways, Iberia, Vueling and Level, is starting short-haul flights under the Level brand from Vienna. With 4 Airbus A321 planes, they will be starting with flights to Palma de Mallorca and London, followed by flights to Barcelona, Paris and Malaga. Why would IAG do that and what’s in it for you?

IAG has been eager to invest in low-cost subsidiaries to compete with Ryan Air and easyjet for the growing market of budget travelers. They are also competing with Lufthansa and their budget arm Eurowings. Both companies were bidding on planes of the now defunct airberlin, but the acquisition of Niki Air, based in Vienna failed – and Ryan Air snatched up the follow-up airline Laudamotion. IAG also has been trying to buy low-cost leader Norwegian – so far with no success.

Last year, they launched Level as a long-haul brand, based in Barcelona, to complement their low-cost, short-haul brand Vueling, also based in Barcelona. It didn’t make much sense to me to launch a separate brand for long-haul flights – it’s a very operationally focused approach that adds no value to customers and is confusing. Singapore Airline tried that approach with Scoot (long-haul) and Tiger (short-haul), but eventually gave up and merged the two.

Now, IAG is doubling down on this approach and making it even worse by adding short-haul flights under the Level brand from Vienna. While they will eventually fly to Barcelona, it’s unclear if there will be connection to Level long-haul flights to the Americas.
It makes lots of sense to invest in Vienna after the failure of airberlin – Eurowings, Ryan Air and easyjet are all competing for that market and trying to fill the gap. But why these flights are launched as Level and not the existing Vueling brand, is unclear.
The full list of planned flights from Vienna is this:

Bottomline: This is good news for people in Vienna as they get more competition and more options, probably resulting in lower prices. Having yet another brand is costly for IAG and confusing for consumers, making little sense to me. But hey, it’ll give me a chance to try and review another airline, so I won’t be complaining too much. What do you think? Will you try Level or stick with the known brands?