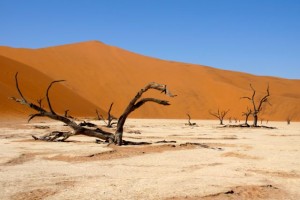 I have traveled to destinations considered “off the beaten path” before and seen a few desert environments as well, but nothing can really prepare you for experiencing Sossusvlei in the Namib Desert, one of the driest places in the world! It also is one of the most beautiful places I have seen anywhere on Earth, in an otherworldly way, and the images and impressions will stay with me for the rest of my live!

A friend showed me pictures of the Namib desert more than a decade ago, the beauty of the landscape captivated me and it was on my to-see list ever since. While it is not really the end of the world, it is not that easy to get to, so it took a few years and a failed attempt to make it happen. Namibia is almost the size of Germany, Italy and the UK combined – but with only 2 Million people, instead of 200 Million in those countries! The infrastructure is as thin as the population, making it difficult to travel on your own and we chose to go with g adventures on a small group tour – you can read a summary of the trip from Cape Town to Victoria Falls here. 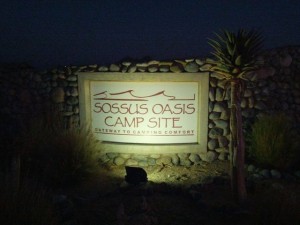 We made our way from Cape Town (read review here) over a few days, including hundreds of kilometers on dirt roads. As we rode along, our appreciation of the vastness of the country and the remoteness of Sossusvlei grew. I have never driven such long periods without seeing another human being or even animals, yet the landscape through the desert is breathtaking. We finally reached Sesriem, the national park entry gate to the area and made camp. Yes, camp, literally! If you know me, camping in canvas tents in the desert in the cold season sounds like a bad idea, but it actually added to the experience of the place! Granted, when I woke up in the middle of a very cold night to go to the bathroom and had to chase away jackals slinking around our tents, I would have appreciated a five star lodge with armed rangers, but in hindsight, I wouldn’t want it any other way: If nature is your destination, you want to have as little as possible separating you from it to truly experience and appreciate it! Besides, it makes for better stories, too 😉 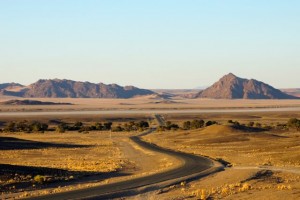 We got on our way to Sossusvlei early in the morning. The Namibian government is making an effort to develop tourism and the 60km ride was on a paved road, much better than most other roads around the country! As we made our way through the park, sand dunes were rising around us. Other travelers had gotten up even earlier than us and were seeing the dunes from the hotair ballon – a sight I was eager to experience later on this trip! Whatever picture of dunes I had in my head, it didn’t do the dunes here justice: they are up to 400m high and create a stunning environment.

Janet, our guide par excellence, wanted to get us to an up close and personal experience and took us to Dune 45 to hike it up. When she suggested to walk up barefeet, more than one person looked at her in disbelief. But as we would learn over and over, she really knew how to make the most of this experience. Dune 45 (45km from Sesriem) is “only” 80m high and, despite the fascinating shape, is not very steep, making the climb possible. I wouldn’t say “easy” as the constantly shifting sand and strong wind reshaping as you go, require a lot more steps and effort than any other 80m hill I had ever climbed. Arriving on the top and having some quiet time to soak in the views across the desert left me with images I will not forget! What was the biggest surprise to me, and made Janet’s idea to go barefeet a brilliant one, was how fine the sand was! It makes most beaches look like gravel! Having it run between your toes made the experience complete. Ok, and running down the last bit at full speed made you feel like a kid again.

And we hadn’t even reached our real destination yet – that took a transfer to a 4×4 vehicle, a short ride and a hike through the sand! Sossusvlei is a clay pan, covered in salt-rich, whit’ish sand, shaped by a river that’s dry most of the time, over many, many years. Nowadays, it’s rare to see water here at all and it shows in the sparse flora and fauna! It has dead, black trees in it and is surrounded by red dunes, giving it a totally surreal and unearthly look!

Apparently, Hollywood agrees and a number of movies have been shot here. As many photos as all of us took, you can’t really capture the impression Sossusvlei leaves with you, but I’m sure I won’t need a picture to remember it! This experience of the Namib desert will stay with me for life!