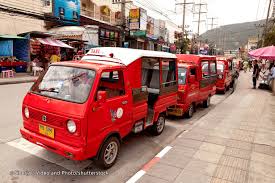 Updated 2020: Getting around Phuket is a hassle and one of the reasons I rather visit (or recommend) other islands in Thailand. Pretty much any land transport available exposes you to one scam or another, resulting in some of the highest taxi prices you’ll pay anywhere in Asia, including some of the most expensive cities on the planet, like Singapore or Hong Kong! Check out my trips how to make the best out of the situation, avoid the scams and enjoy your visit to Phuket!

Taxis and Tuk Tuks in Phuket are in the hand of the local taxi mafia, making it at least 2-3x as expensive as in Bangkok or pretty much anywhere else in South East Asia. Even in Singapore, the most expensive city on the planet, a taxi is cheaper than in Phuket. Alas, since the last military coup, the chaotic, free-for-all rip-off is now a much more organized rip-off overseen by the police and local government. Here are your best chances to get around:

On arrival at Phuket International Airport, make your way outside and look for the Metered Taxi Booth. The staff speaks English and will assign a taxi driver to you who will take you to the car. They are (small’ish) Toyota Corolla and work for 2-3 people with not too much luggage. The driver should turn on the meter and go. Some might try to negotiate a fixed price, do not agree to that and insist on the meter. I made sure our driver on a recent trip saw that I was following the route on Google Maps on my phone and he took the shortest route available. Your fare will be the meter price plus THB100 airport fee. Our 1h trip, including tip, to Patong was THB700 (around $23). While that is probably the best deal you can find, it’s about 3x the price for a similar trip in Bangkok, Thailand’s capital!

You can also pre-book cars at fixed rates, starting around THB700 for a small car, more for premium cars. If you have more money than time, you can even charter a helicopter for under $500. Check out gettransfer.com for one option with good reviews! Keep in mind that a waiting time of 1h is included, so you’ll have to inform gettransfer in case of longer flight delays. 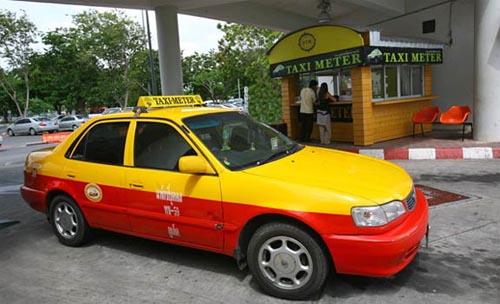 You can also book a fixed price taxi, which is usually a Toyota Camry  or similar which will be slightly more at around THB900 for the same trip. For a larger family or group with a lot of luggage, a van might be another alternative for slightly more.
They will also be your main choice for the return trip to the airport, as the metered taxis are not available outside the airport. My price to the airport, purchased at a travel agent, was THB700 for a similar Toyota Corolla. Cars arranged by your hotel will typically more expensive. 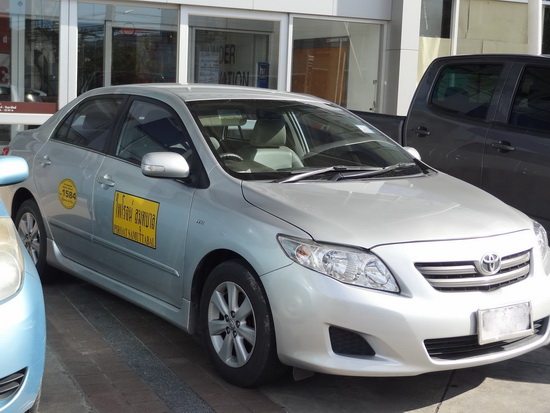 If you are on a budget, you can find several booths inside and outside the terminal offering shared Minivan rides, starting at around THB200. That sounds great, just realize that you might be in for a very long trip. With up to 15 people in the van, there will be a lot of stops along the way and your ride can take up to 3 hours! Some companies add a stop to sell you tours or to fill up gas, adding more time to the trip. Unless you are a solo traveler on a tight budget, I wouldn’t recommend it.

grab ride hailing service has arrived on Phuket, but it is not the solution to the dreaded situation, as it has in many other places with dysfunctional public transport. Indeed, they seem to be part of the problem in return for being allowed to operate: grab cars are even more expensive than the fixed fee taxis. I was shocked to see that a ride with grab that will cost $2-3 anywhere else in South East Asia (except Singapore) will cost $30 on Phuket! The situation is so bizarre that often the larger grab XL (vans) or grab premium (limousine) have the same price or are less than a regular grab car!

I usually don’t recommend renting cars in South East Asia as traffic follows very different (or no) rules than in Western countries. Phuket is one place where I would consider it: You can rent a compact car for a day for as little as your one-way taxi to your hotel. If you have a short stay and are planning to explore the island, you’ll get plenty of freedom and the best transport value in Phuket! Do keep in mind that as a foreign tourist in a rental car, you will be the target for the local police. There are frequent traffic stops, stay calm and respectful and you’ll most likely be on your way without an issue. While the law is not quite clear, it’s advisable to have a valid international driving permit (IDP, valid for one year & issued in your home country) in addition to your home country drivers license. Make sure you understand Thai traffic laws and follow to the letter – or you might end up with high fines or at least a contribution to the Police’ tea money fund… Just because Thai drivers do it doesn’t mean it’s legal and you’ll get away with it!

A more economical way to ride independently and fun in the good weather is to rent a motorcycle. They are available all over Phuket for as little as THB200 – but the same rules apply: You will be a very visible target for the police and are likely to be picked out for any violation. Make sure to have a valid motorcycle drivers licence in English and/or an IDP, as well as a helmet at all times and follow the traffic laws. Even if you do, Thailand has a very high rate of motorcycle accidents with injuries and fatalities, so you have to weigh if that risk is worth saving a few bucks!

Tuk Tuk – all over Phuket you’ll find converted pickup trucks with benches on the back, usually waiting along the roads for customers. They are probably the biggest scam and a short ride of a few hundred meters can cost you more than an hour-long taxi ride in Bangkok. They do have an official list of maximum prices they are supposed to follow – you can find the list here. The lowest price available is THB200, so expect to pay at least that, even if just going a few blocks.
When a blogger reported the outrageous fares and got a few hundred thousand views in the process, the Phuket governor responded that the prices are perfectly legal, they are the maximum allowed and if you don’t negotiate a lower price, it’s your own damn fault. I have never seen or heard of anybody being able to negotiate a lower price with a tuk tuk on Phuket than on the list. If you are able to do it, please report it in the comments – I’ll offer a price for anybody who can do it!

In most tourist destinations hotels will offer airport pick-up, but unfortunately not in Phuket. After the taxi mafia beat up some bus drivers a few years ago, the hotels will only arrange standard taxis for the ride. Some now do offer hotel shuttle bus rides, for example to the mall or to Patong. That might be a good alternative for solo travelers. Inquire with your hotel if or what they offer!

Bottomline: Your best way to enjoy your trip to Phuket is to pick a nice resort that meets all your vacation needs in walking distance (review of Phuket’s best beaches coming soon). You can take a metered taxi there and organize a fixed fee taxi for the ride back, minimizing the hassle of dealing with taxis or tuk tuks. If you want to explore the island, you can sign up for one of the many tours offered at countless tour operators or rent a car for the day to drive on your own.
If you are planning to use taxis or tuk tuks a lot, I suggest to not calculate what your paying and just enjoy the ride. In the grand scheme of things, the taxi fares won’t blow your budget, so just consider it a cost of the destination.