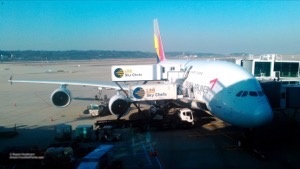 You are tired of the poor service on US carriers and are looking for an alternative on flights to Asia? You are a United MileagePlus member and looking for a good redemption for your miles? Asiana Business Class might be the answer – a comfortable flatbed seat and great service make Asiana a good alternative for flights to Asia – read on to find out more!

I was planning another trip from Manila to the US and wanted to try something new. I’ve heard good things about Asiana, but hadn’t flown their business class. I booked a flight from Manila via Seoul to New York, giving me a chance to fly both, Asiana’s regional Business Class as well as their premium Business Smartium long-haul product. This is the review of the long-haul flight in Business Smartium Class!

Predeparture: Asiana allows for a generous amount of carry-on and check-in luggage when traveling in Business Class: On North America routes, you can bring 2 check-in bags up to 32kg each as well as two carry-on bags up to 10kg! As a StarAlliance Gold member, you can bring one extra check-in bag of up to 32kg – that’s a total of 116kg of luggage, more than I’d want to carry!
My flight to New York departed from Seoul and I was connecting from a regional fight, so I didn’t require the check in at Incheon. Incheon is regularly rated as one of the top airports in the world and the terminal is very impressive. As a business class passenger, I had access to the Asiana lounge and it made for a very comfortable layover – read my full review here!
Despite the large number of passengers on this Airbus A380 flight, the ground staff handled the boarding process well and allowed First and Business Class passengers as well as elite frequent flyer members to board first.

Service Onboard: The service on my regional business class flight had been good, but it was even better on this long-haul flight. The flight attendant introduced herself and welcomed me on board. Her English was fluent, better than the staff on the regional flight.
She provided me with a menu as well as an amenity kit. It provided standard toiletries in a cloth bag – it won’t win any awards, but offered all I need. 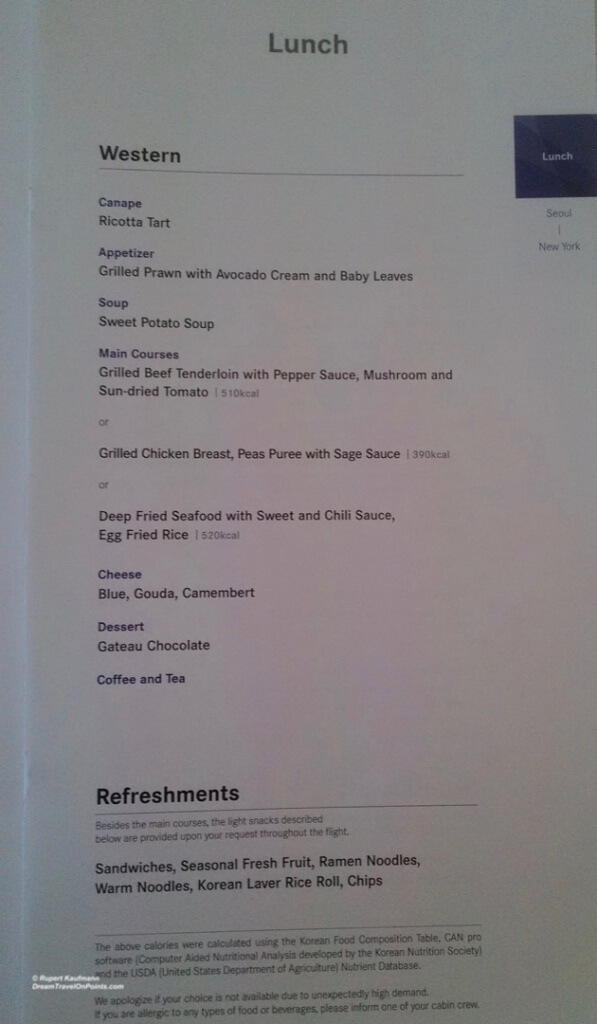 The food service after departure was a lunch with a choice of Korean and Western Cuisine – and I picked the Western option with beef tenderloin as the main course. The food was served restaurant-style and started with a canape of a ricotta tart. 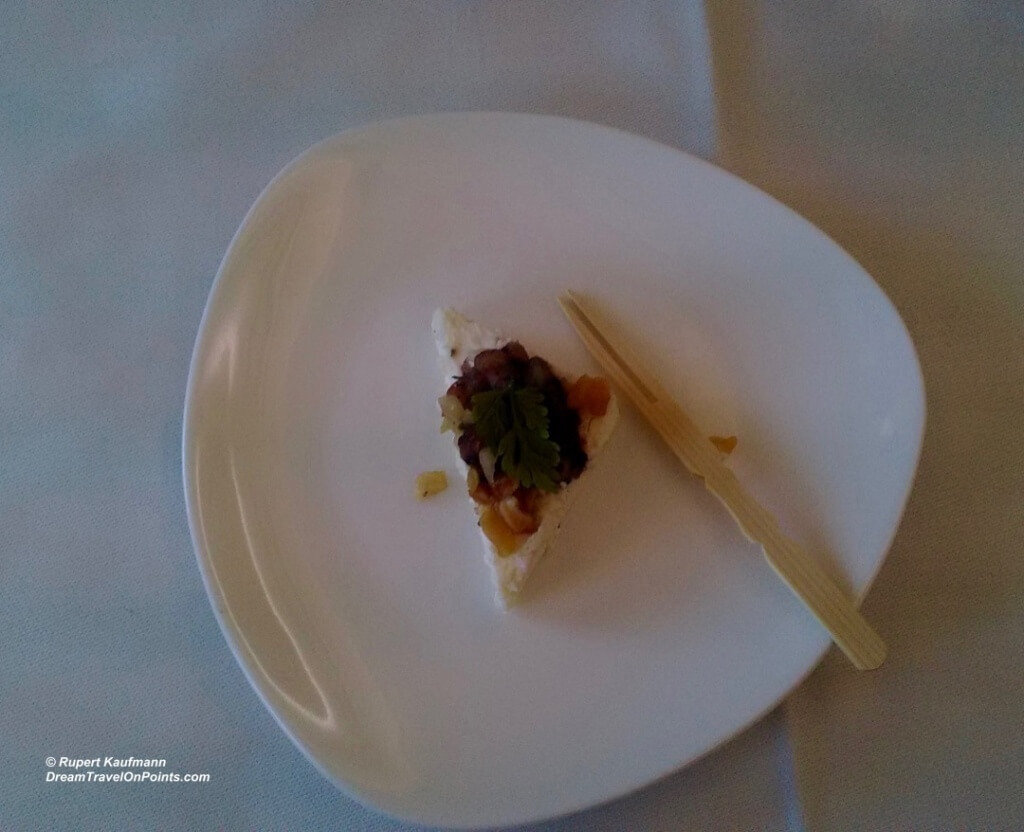 Next was an appetizer of prawns with greens. Having just had breakfast at the lounge, I skipped the potato soup and went straight for the main course. The beef tenderloin was drowned in a pepper sauce with mushrooms and dried tomatoes – it wasn’t well presented, but tasted much better than it looked. 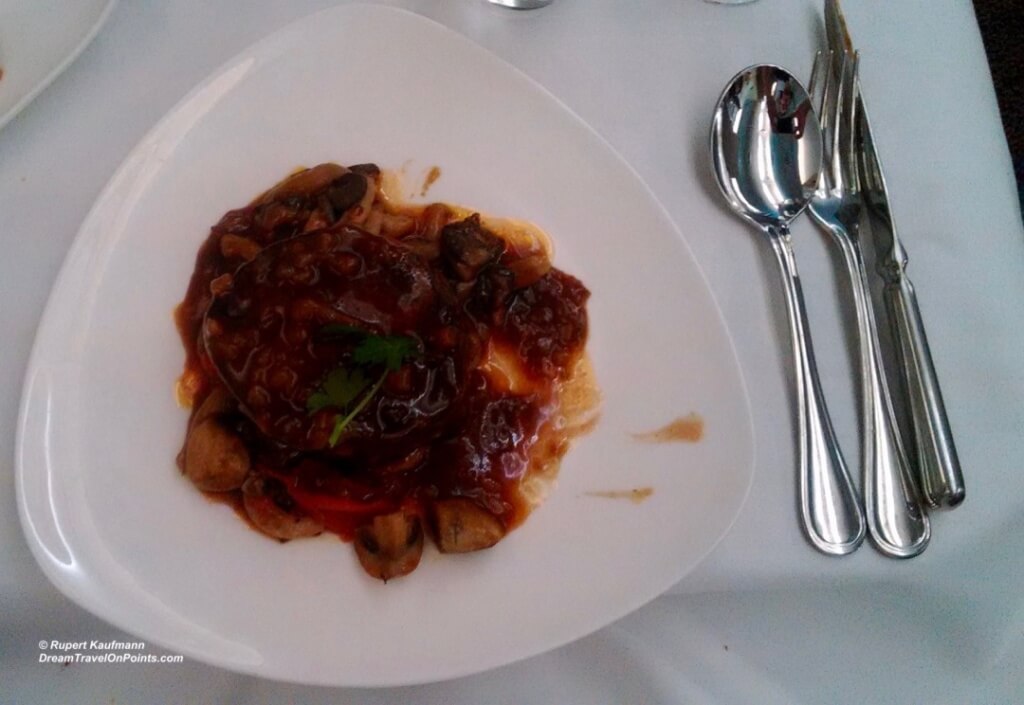 Fortunately, I wasn’t very hungry, because the portion was fairly small. That left me enough room for the chocolate cake (ahem… Gateau Chocolate), which tasted just as good. 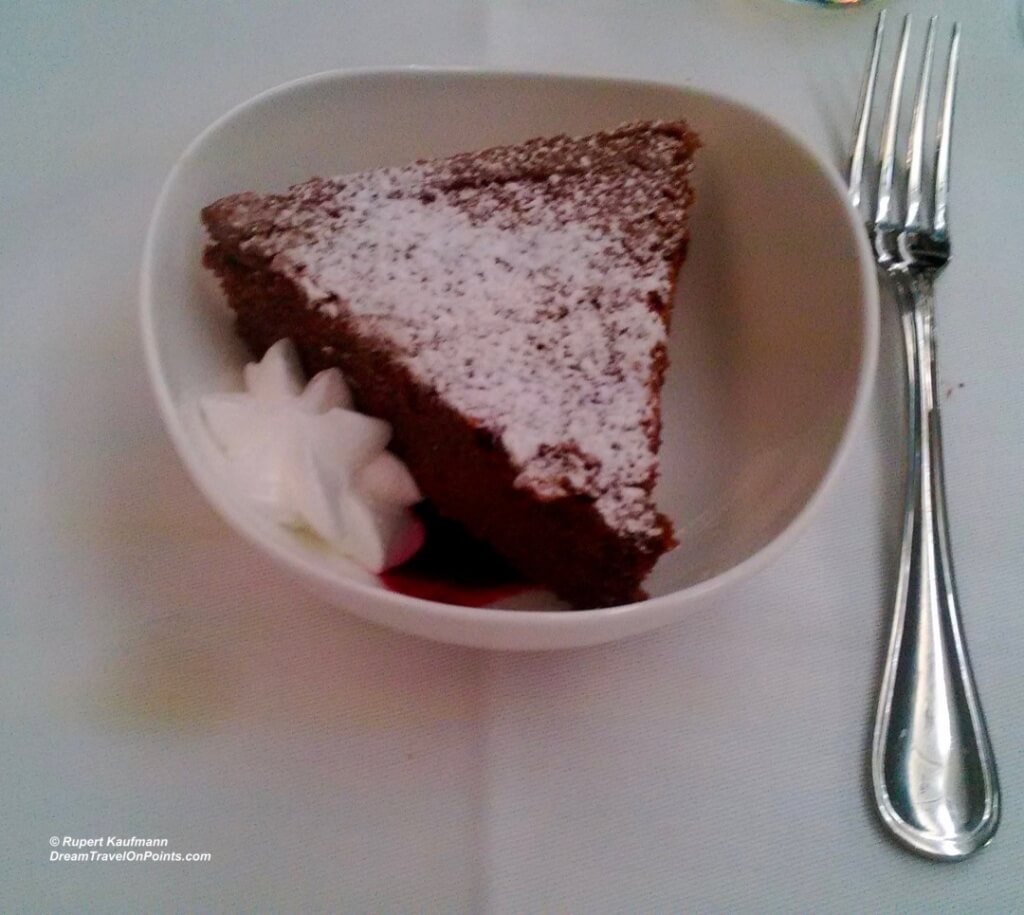 The flight to New York is around 14 hours and Asiana offers a number of cold and warm snacks on request as you get hungry in between – but I slept through most of the flight and didn’t try any of them.
Prior to arrival breakfast was served and I went again for the Western option, consisting of bread, eggs and meats as well as some fresh fruit. It was not as convincing as the lunch, but good and very comparable to other Business Class breakfasts.
Overall, I’d rate the food service in the top third of the business class offerings I’ve seen. The menu was well put together and I liked the restaurant style service. Each of the dishes was well prepared and tasted very good, although the presentation didn’t look as good as it sounded on the menu! I liked it better than United or ANA, but not quite as much as Singapore Airlines or Thai Airways with their “book the cook” service!
I’d call the entertainment system slightly better than average. There was a good selection of Asian and International movies, TV shows and short programs, although the selection is not as exhaustive as other carriers. The personal screen is large and clear and the individual remote controller is easy to use, making watching videos pleasant.

Hard Product: Airbus A380 On Asiana’s A380 the Business Class is located on the upper level and laid out in a staggered 1-2-1 configuration. This is my favorite business class layout, even better than reverse herringbone, with all seats facing forward at a slight angle, offering direct aisle access and a good amount of privacy for solo travelers. The best seats are the window-window seats that are separated by a side table from the aisle for extra privacy and also have good views out the windows. I had a aisle-window seat, which has the side table between the seat and window, leaving you a little more exposed to traffic in the aisle and with limited views. For couples traveling together, the middle seats close together are the most convenient. The cabin is held in beige/brown tones, which is pleasant and inoffensive, but won’t win any style awards. 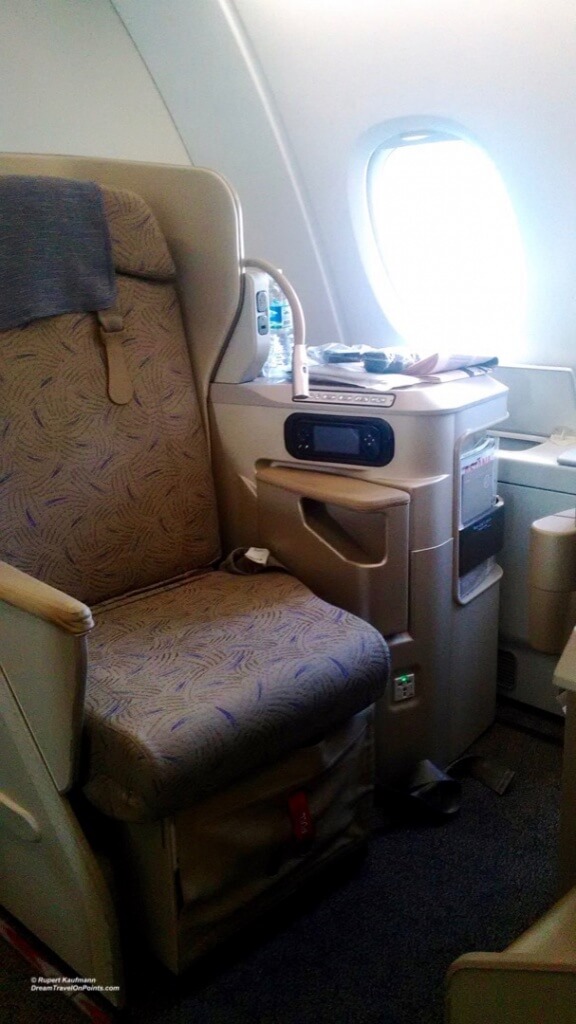 The seat itself reclines gradually from the full upright through a lounging position to a fully flat bed. It’s covered in cloth, which I consider more comfortable for long flights and sleeping. The seat converts to a bed of 74in length with a fairly wide foot cubicle, making it comfortable to sleep on even for somebody 6ft3 like me. Together with the similar ANA seat, this is one of the most comfortable business class seats in the air. It is longer than Singapore Airlines seats (but narrower) and wider and with more foot room than United or Lufthansa. Each seat has plenty of storage, in my case a locker next to the window, storage under the foot rest as well as small cubby holes for my phone, headsets and other items you want to have close at hand. The large side table in addition to the pull-out tray is convenient to keep drinks or snacks when you have put away the tray! Each seat also has a power outlet and a USB port, so you can keep your gadgets charged even on the longest flight. The provided blankets and pillows were some of the most comfortable ones I’ve received in business class, with a thick pillow and a soft blanket. The remote controller and seat controls were intuitive and easy to use. 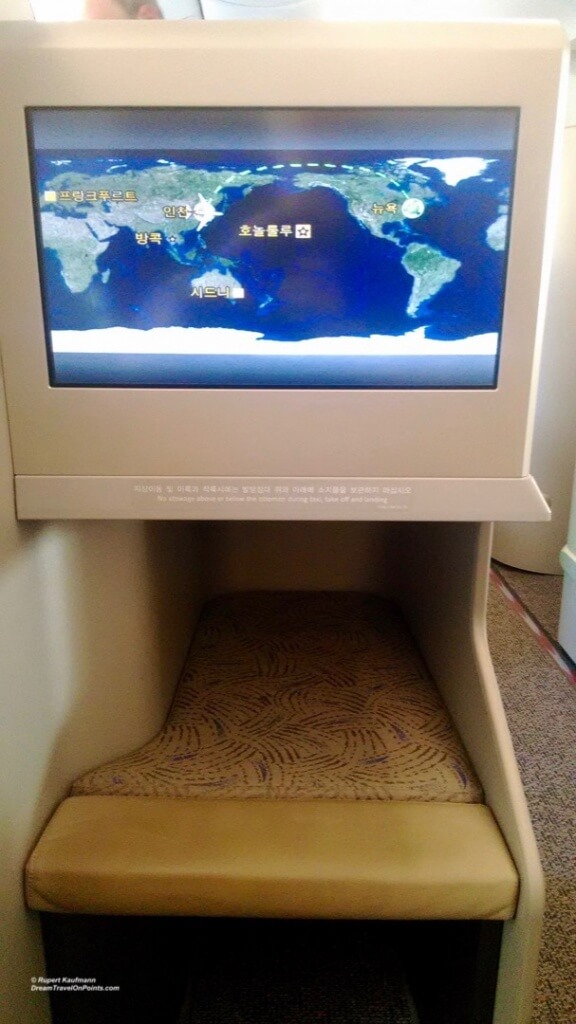 Conclusion: With one of the best business class seats in the industry, Asiana makes a strong case to choose them over any US carrier. The friendly and attentive onboard service puts Asiana near the top of the industry, just a breath behind Singapore Airlines. Add the well put together menu and the competitive entertainment options and you have one of the best business class products on the market that deserves their 5-star SkyTrax rating! It’s tough for me to pick between ANA and Asiana – but that’s a good problem to have. I used miles for this flight and it’s well worth the slightly higher price for partner redemption! Asiana is a great option on flights to Asia and there is little reason to fly United or any other US carrier instead.

If you are connecting to a regional flight in Asia – check out my Asiana Regional Business Class Review and Asiana Incheon Lounge Review! If you are new to Asiana – find out all the Facts & Figures!