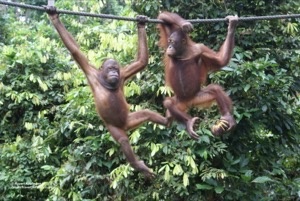 If you love wildlife and make your way to Kota Kinabalu in Sabah, Northern Borneo, you should make the trip to the Sepilok Orang Utan Rehabilitation center. It’ll be as close as you’ll ever get to Orang Utans in a natural setting, it’s one of the most amazing wildlife experiences and best photo opportunity you’ll likely have! It’s a lot easier to visit than it sounds, so read on what to expect and how to get there!

Sepilok was established more than 50 years ago to take care of rescued orang utans and re-introduce them to the wild. Often, babies would be rescued after their parents were killed by hunters or loggers, or they were in captivity as pets! Instead of being kept in a zoo, they were trained to survive in the wild and slowly re-introduced to living on their own. After being kept and fed as babies, they are put into the sanctuary where they can live on their own or return to the center for two daily feedings. As they adjust to life in the wild, they need less and less support and may not return to feeding at all!
Fortunately for us visitors, there are 60-80 orang utans living in the center and some of them do return to the twice daily feeding, giving us a chance to see them up close and personal, but entirely on their terms!
Wooden walkways lead to the feeding area where the rangers provide food for them. Because they live in the wild, the orang utans may or may not come. While you are never guaranteed a sighting, as with any true wildlife experience (if you are “guaranteed” a sighting, it’s called a “zoo” or the animals are otherwise forced to be present), your chances at Sepilok are pretty good given the number of apes and the fact that there are some more recently re-introduced to the wild. 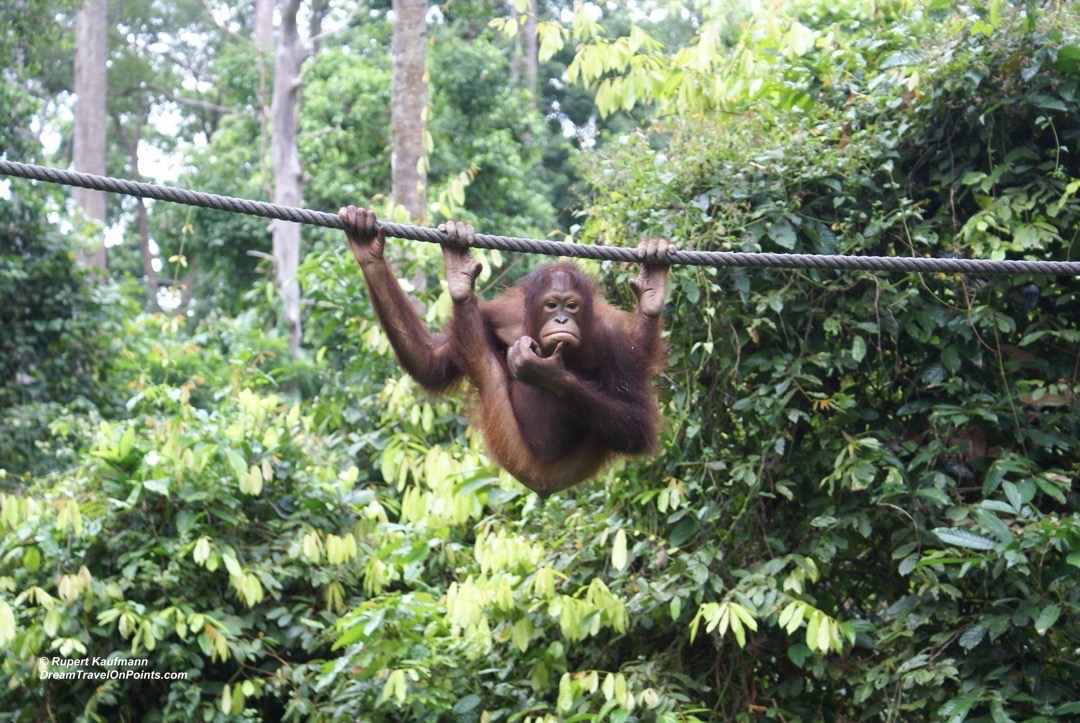 During my visit, I was lucky to have a few of them return and I had no doubt that they share more than 97% of our DNA after watching them for a while. One of them was hanging from the rope, observing me as much as I was observing him. I was the only one with a camera, although he’d probably figured it out pretty quickly.
And one of them wanted to check out those visitors/intruders a little more closely and jumped onto the rail of the walkway – that was a lot closer than I was comfortable with and I backed away slowly – it’s his house, his rules, I figured! 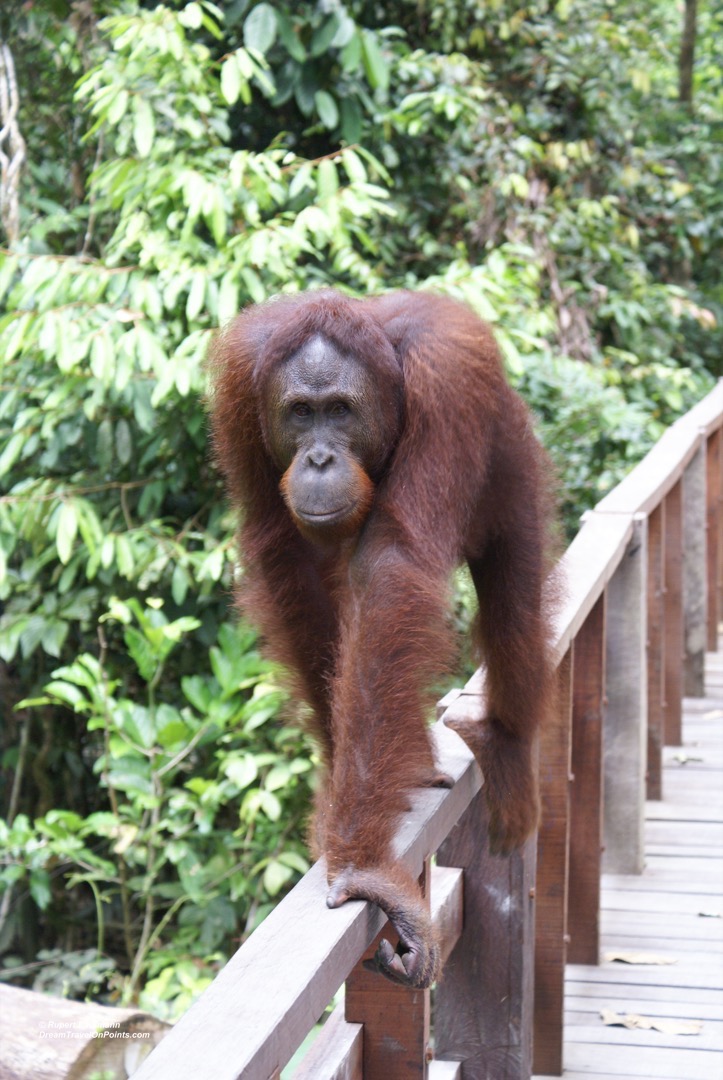 If you are planning to visit Sepilok, it’s a lot easier than it looks on a map. Most likely, your base for exploring Sabah is Kota Kinabalu, the capital city of the province. From there, you can easily book tours to take you to Sepilok on a day trip.
If you are going on your own, the easiest way is to book one of the many, cheap flights to Sandakan. The Center is about 25km west of Sandakan and a public bus or taxi can take you to the center. You can take an early flight, visit the center and return to your hotel in Kota Kinabalu in time for dinner. Both Malaysian Airlines (under $100 round-trip) and AirAsia (as little as $30 round-trip) offer flights that allow for one-day visits!
The feedings are at 10am and 3pm and you should be there at least 30 minutes earlier to walk to the feeding platform and save a spot for the best photos! The entrance fee to the center is 30MYR (or $8) and there is a photo fee of MYR10 (or $2.50). While you can get pretty close to the apes, it’s worth bringing a travel camera with a good zoom for the best close-up shots (read my recommendations here)! For the latest on opening hours, transportation and fees, check out the official web site!

I still remember the scenes of this visit and its the most fun you can have with wildlife watching outside a zoo. While it’s not as convenient as the Semenggoh center in Sarawak, it is older, bigger and I thought better organized than its Southern partner in Orang Utan rehabilitation. You’ll have a great time visiting either (or, if you are a fan like me, both)!